Soccer Fans and the Super Bowl

It’s Super Bowl weekend here in the United States and football is on my mind. I grew up in Los Angeles, a city without an NFL team. In fact I’ve never lived in a city with an NFL team. When I’m asked what team I support I run through a brief flow chart, and this year I’m backing the Pack. I’ve based my chart predominantly on geography, and the Packers come out on top because I lived in Wisconsin for three years. You could say this makes me a disingenuous fan or some kind of fake or a bandwagoner, but nobody ever has. People just shrug and nod their head. It’s not that controversial. There are legions of NFL fans around the country that haven’t been to a game, let alone seen their team’s stadium. By supporting Green Bay, I’m not making any kind of statement. Despite—or maybe because of—all that, I’m actually serious about supporting the Packers. On Super Bowl Sunday I’ll be in front of the TV, cheering for my team. I’ll even be a little upset if they lose. 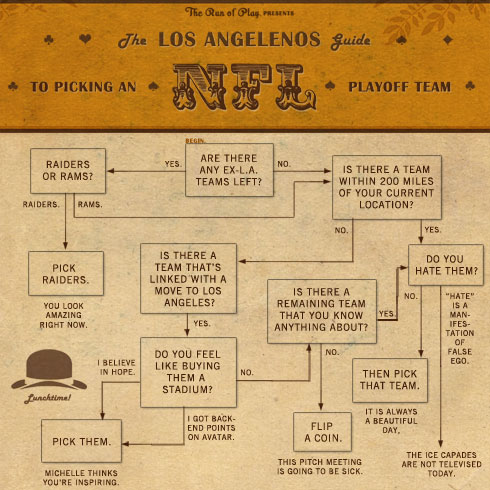 My flowchart wouldn’t be as applicable if I converted it to soccer. For starters, L.A. has two Major League Soccer teams. I follow MLS, but like many American fans I also follow European soccer. It would be much more complicated to create a Los Angeleno’s or even an American’s Guide to Picking a European Soccer Team. There are some obvious geographical complications (the Atlantic Ocean), and even if I could create such a flow chart, I’m not sure it would go over well. Would Europeans get it? My friend Andy, for one, wouldn’t. To Andy, it wouldn’t be remotely funny. He’s from greater Manchester and—paging Edin Džeko—a Manchester United fan. Like any soccer fan, he appreciates a good game, but if United isn’t involved he emphatically does not care about the outcome (unless the outcome somehow affects United later, as in certain cup ties). By contrast, I enjoy picking a side just because it makes the game more interesting. It’s fun to become emotionally involved, however tenuous my connection to any given European team. Often the team I support, as with the NFL, is simply the team I know best.

In 2008 I watched the Liverpool/Chelsea Champions League matches with a different English friend, Stu. Stu is a Liverpudlian and a die-hard Liverpool supporter. To antagonize Stu, and because I knew the Chelsea players better than I did Liverpool’s, I rooted for Chelsea. Stu did not understand. He recognized that I was knowledgeable about soccer, even passionate, but he did not understand how I could just pick a team. As time passed and beer flowed Stu got angry. He argued that Chelsea’s Russian money distorted the transfer market and ultimately hurt the game. I agreed. Eventually, Stu resorted to hurling naked insults. When I challenged his allegiance to Liverpool, as I might tease a Dallas Cowboys fan that hasn’t ever been to Texas, Stu set his jaw. He told me that prior to moving the US he and his dad had gone years without missing a Liverpool home game. He told me the team “was a part of him.” When I balked at this cliché he told me about the day in 1989 when his dad and 95 other people were crushed to death at Hillsborough Stadium.

I kept quiet about Chelsea for the rest of the game.

To Andy and Stu shifting my support is sacrilegious; to me it is a way to keep things interesting. I stake no claim to Greater Manchester or Liverpool. To them, a team’s support is place-based and heritable. Support can’t be changed; it’s serious.

But what about Americans who support one team and stick with them, just like a local supporter? Stu might enjoy seeing an American wearing a Liverpool shirt just as Andy might like to have a friendly chat about Wayne Rooney, but at some level that fan—the outsider—is still a kind of fake. To Andy and Stu, allegiance to a team, whether loose or diehard, is incomprehensible without allegiance to the place, too.

In the United States, these places are scattered across such a large area that it’s no wonder we are comfortable with loose ties to our beloved clubs or “franchises.” Teams depend on these loose ties for things like jersey sales and TV revenue. The NFL, the NBA, and MLB all depend on their clubs’ ability to acquire fans from outside their “market.” As Christopher Mann pointed out on this blog last week, soccer is changing. The American sporting scene is beginning to look like a microcosm of global soccer’s new supporter framework. The clubs have already caught on; teams cultivate supporters in all corners of the globe. Consider how and where big European clubs now conduct pre-season training. Look at what American academy clubs have been persuaded to name themselves. But there is something upsetting about this to the local fan, something impersonal. I wonder if local supporters will ever accept a dedicated fan from Asia or the United States as an equal. Maybe it doesn’t matter. In a lot of cases, the local supporters are already in the minority.

In the United States, we are pretty easygoing when it comes to the reasons why we support a given team. Yes, we have diehard, local fans, but I think my flowchart would at least get a quick chuckle out of most of us. How many people will watch the Super Bowl from a place without a local NFL team? When the team doesn’t pick us, we have to pick the team. So on Sunday, whether you own a share of the Packers or you just think Aaron Rodgers is sexy, come on over to my house. We can watch the game, curse the refs, and have some beers. Then, maybe we can catch a repeat of the Chelsea game. If you really want, you can pull for Liverpool, but I’m going to root for the opposition.

We also don’t have the local, lower league setup prominent in Europe. The multi-tiered relegation and promotion system allows for more teams and thus for local allegiances to teams that aren’t in the top flight but one day could be. In the US, if you’re a fan of top-level athletics, you have a limited choice.

Soccer Fans and the Super Bowl