In his introduction to the fiftieth anniversary edition of The Naked and the Dead, Norman Mailer engages in an uncharacteristically tender retrospective of the manner in which he originally wrote the book. Looking back at his twenty-four year-old self through the uncompromising mists of time, Mailer highlights the frailties that were present in his early writing and discusses both the strengths and weaknesses of what was his first major work.

Tellingly, Mailer admits to the somewhat over-written nature of the novel being of little concern to him. In his mind it was more important for the book to have ‘vigour’, to be daringly naïve and unceasingly engaging of its readership. Sure, there were imperfections, but to Mailer the book represented ‘what [he] learned about compassion’ and the raw pleasure of unabashed optimism.

When we indulge in some reflection on the history of football—particularly that of the first sixty years of the twentieth century—we are regularly overcome with a similarly cavalier sense of nostalgia. Though the majority of us were not alive to see it, the thought of crowds of flat-capped men watching heavy-footed players dressed in calf-length shorts and billowing shirts, their dye running off into the mud, often fills us with an indefinable yearning for the past. Granted, the game may have been less technical (more naïve) in those days, but therein lays Mailer’s joy of unconfined enthusiasm. We tell ourselves that that was a simpler time, a time when football was ‘pure’ and ‘unpolluted’ by the social and financial forces of modernity. But what exactly is this ‘modernity’ that we can be so hostile towards, and what impacts has it had on our game as it has evolved into a wholly globalised product for an extreme form of mass consumption?

The problem with modernity is that it is can be an awfully difficult concept to tie down into a single, digestible definition. Viewed through a purely sociological lens, the modern is of course what has come to be recognised as the post-Enlightenment age, the socio-economic structures and trends prevalent within the industrialised world. Conversely, political modernity dawned with the rise of the French and American republics in the middle of the eighteenth century and has come to form the ideological basis for what could very loosely be termed the ‘age of liberal democracy’. Artistic modernity, however, draws a far clearer dichotomy between the ‘old’ and the ‘new’, emphasising the necessity of change and constant innovation. It is this artistic view of ‘the modern’ that I believe can be applied, at least in part, to some of the shifts we have witnessed in the aggrandisement of football culture over the last few decades.

In his book Modernity and Self-Identity: Self and Society in the Late Modern Age, British sociologist Anthony Giddens identifies the key characteristic of modern social institutions as their inherent dynamism, their radical undercutting of traditional customs, and the global nature of their impacts. When we take a step back and assess to just how great an extent football has developed in terms of the internationalisation of its key institutions and the marketing of its ‘product’, it’s hard to argue against the game as having been heavily subjected to those very forces of artistic modernity—albeit having been dragged through the neoliberal economic model at the genesis of this change.

Football is emphatically the most highly

globalised game on the face of the earth. Its stars are recognised everywhere from Germany to Japan, and you’re just as likely to be able to buy a Real Madrid jersey in the shopping centres of Seoul as you are in the Spanish capital itself. Just ten or fifteen years ago, however, this wasn’t necessarily the case. In the mid-nineties the Premier League, for example, was a division in relative isolation from the rest of world football; foreign players were thin on the ground and the majority of clubs didn’t sell merchandise on a national scale, let alone an international one.

Teams were, until relatively recently, still products of their communities rather than the glimmering figureheads of this crusade of sporting globalisation that we see today. In short, football did not even loosely conform to Giddens’ conditions for modernity until the time of, or just after, the 1994 World Cup. Of course, the game has been regularly played on an international level since the 1930s, but global impacts and ‘radical undercutting of traditional customs’ were not processes associated with the sport’s development for much of that time. Internationalisation was sparse, perhaps even non-existent, in its contemporary sense.

While the 1994 World Cup seemed to provide a watershed in terms of the amount of advertising in the game and the inter-continental movement of players, I would argue that the 2002 competition, hosted in Japan and South Korea, was the primary harbinger of football’s relationship with the forces of a particularly hyperactive brand of modernity.

A new frontier for football’s showpiece event, the space-age stadia and aggressive marketing of the 2002 tournament marked a ramping-up of the intensity of the relationship between football and the constant innovation of ‘the modern’. With the on-field drama set against the backdrop of the world’s most technologically advanced societies, one could almost physically witness football adapting itself to the age of instant communication and digital monopoly. Football’s journey from pastoral hobby to quasi-cultural symbol of the globalised age seemed to be complete.

No better was the conclusion of this transformation represented than in the shape of two of the players who took part in that tournament; David Beckham and Hidetoshi Nakata. I recently wrote a short piece on my own site on the subject of Nakata and how the former Japanese international midfielder can be said to have been the first footballer to have crossed an imagined divide and become a transcendent modern cultural icon. Indeed, the height of Nakata’s global fame—as was also the case with Beckham—can be traced to the aftermath of the 2002 World Cup, both players quickly becoming the instantly recognisable face of a horde of iconic brands.

Of course, the use of footballers to advertise a range of consumer products is nothing new; Gary Lineker has promoted crisps in an excruciating fashion for years, Ian Wright once humiliated himself over a plate of chicken, and George Best and Bobby Moore were once deployed to eulogise about products as wonderfully parochial as ‘Milk’ and ‘Pubs’ respectively. The superstardom of Beckham and Nakata, however, represented a seismic shift in the status of players within the global economy and their relevance to the narrative of ‘modernity’. The role of the footballer in marketing was no longer only as a novelty in the commercials of regional biscuit manufacturers; they were now the chiselled, stony-faced frontages of transnational corporations, significant bolts in the ever-strengthening framework of globalisation. If we are analysing this transformation using the work of Giddens as a reference point, then the idea that a radical undercutting of traditional customs—a hallmark of the onset of modernity—has taken place seems particularly apt to this situation. 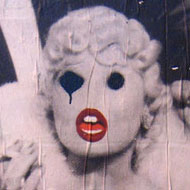 towards what is a rather generic form of materialist modernity has been lamented by many. Hugh McIlvanney, the great Scottish sports writer, wrote in worried tones during the 1994 World Cup, seemingly concerned by the march of commercialisation and compelled to remind his readers that “sport has less to do with expansionist dreams and commercial projections that with the celebration of the moment.” I wonder what he would have made of a couple of recent decisions taken by FIFA’s executive committee.

Indeed, the decision to award the 2022 World Cup to Qatar surely marks yet another waypoint on the road to the wholesale generation of a full political and material form of contemporaneousness. While Sepp Blatter may insist that the decision was made in order to spread football to areas as yet unconquered, an extension of his solipsistic ‘legacy’, the vastness of the tax-free riches that will be available through the Gulf state’s petrodollars were undoubtedly at the heart of the conclusion reached by football’s murky governing body.

Of course, if there is one thing that has defined the modern era of interdependence it has been oil. Almost willfully forcing itself into the global political meta-narrative, football’s journey from amateur pastime to ubiquitous socio-economic institution, whether welcomed or not, is almost complete. That pastoral age of working-class heroes and what we may hazily reflect on as the game’s ‘traditional’ values of sportsmanship and community has been tortured—slowly and painfully—over the last fifteen to twenty years. It may still exist in pockets around the world, but it is forced to live a clandestine life, seemingly chased into hiding by FIFA’s aggrandisement of the commercial side of the sport.

However, like Francis Fukuyama, it would be all too easy to predict ‘the end of history’. The FIFA presidencies of Blatter and João Havelange before him have sent the game down the road of financial gain, but that is not to say that football is completely detached from its local and humanitarian roots. There are footballing projects engendering greater community cohesion and gradually healing deep social wounds around the world, initiatives which open a window on the game’s true identity. Football as an entity may have modernised to an extent almost beyond recognition, but that daring naïvety expressed by Mailer, that great pleasure taken in uncynical optimism, is not dead yet.