“All referees are good, and all are bad. A referee only needs to make one mistake, or an assumed mistake,

against a club and if he lives till he is a hundred he never gets over it.”

So said Charles Sutcliffe, former referee and president of the Football League, d. 1939. Yep, 1939. And you thought your contempt for officials was all modern and shit. Tsk. A quick shufti through Simon Inglis’ fine centenary history of the Football League, League Football and the Men Who Made It, confirms that eternal recurrence might have something going for it. At times, however, it’s like reading about a parallel world with some subtle differences to our own.

Once, Sutcliffe oversaw a game between Sunderland and Small Heath at which the crowd took a violent dislike to his officiating. Literally:

… legend has it, he was forced to escape from the ground disguised as a policeman, no small feat for such a small-footed man! According to Sutcliffe, several hundred Sunderland youths made their way to his dressing room, ‘evidently with no friendly intentions’.

As there were several piles of stones lying nearby for the repair of the roads, it was deemed inadvisable for Sutcliffe to face the mob so, on the suggestion of Inspector Watson, he donned an officer’s overcoat and helmet, and was thus able to nip out from another gate into a waiting taxi cab.

Sutcliffe apparently presented a ‘grotesque appearance’ in the oversized coat and helmet. His stiff, upright shirt collar was quite visible underneath the coat, and no sooner had he leapt into the cab than someone spotted the ruse. But before they could catch up with him, the driver whipped up his steed and transported the unfortunate fugitive to safety.

Strong nerves were as much a requirement for refs then as now, evidently. Sutcliffe disallowed six goals in Blackburn’s 1-0 win over Liverpool in 1896/97. “Quiz” of the Athletic News wrote: “Lancashire loony Charlie Sutcliffe went bonkers on Saturday and STUNNED millions of the Queen’s football-loving lieges across the Empire by crazily disallowing SIX goals at Ewood Park”.

The refereeing career of John Lewis was even more troublesome. Lewis—another prominent administrator (he was a League vice-president)—was the most famous referee of his day. He was also a rather abrasive character:

In thirty years at the top, Lewis managed to fall out with just about everyone. From Accrington to Antwerp, John Lewis was showered with abuse and pelted with bottles. Even close friends weren’t immune from his often savage temper.

But John Lewis was no tyrant. He was, rather, a puritan who swept aside all who confronted him with boundless energy and unflinching honesty.

In other words: you thought Jimmy Hill was annoying?

Lewis was the referee at the infamous 1920 Olympic final in Antwerp, 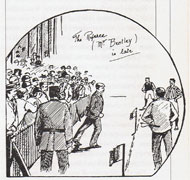 the losing Czechoslovaks not being best pleased at some decisions which went the way of the home side. He had problems at home, too:

More than once at a match he jumped the rails and chased spectators who had thrown mud or clinker at him. At Deepdale he once refused to resume a game until someone who had blown a whistle was detected and removed. He demanded honesty from everyone, and when it didn’t come he could explode with rage.

… at Barley Bank, Darwen, he was surrounded by a mob, kicked and battered, despite being an ex-player of the club and married to the sister of a former mayor of Darwen.

At Gigg Lane, Bury, Lewis had to hide in a ticket box after his clothes had been ripped by an angry crowd, one of whom accused him of being drunk. This insult so infuriated the teetotal Lewis that he emerged from the box, whipped off his jacket and shaped up to thrash the man. Fortunately Joe Hartley of Accrington interceded before blows could be exchanged.

“It is doubtful,” Inglis says, “whether any other League referee ever became the subject of more physical attacks, hate mail or protests from angry clubs than John Lewis”.

Not that other officials escaped the rancour, nor did the League perhaps do all it could to help them:

After first discussing the issue in 1891, crowd trouble came to the Committee’s attention again in January 1895, when the highly controversial referee John Lewis, Blackburn’s representative on the Committee, complained about the ungentlemanly behaviour of Derby’s supporters. Any recurrence, warned the League, ‘may result in the withdrawal of matches from the Derby ground’.

The word ‘may’ was significant, for the League rarely clamped down on members when it came to crowd trouble. This was shown a few weeks later, when a referee was assaulted at Arsenal. As always, the FA dealt with the disciplinary aspect of the incident (usually by issuing a caution or ordering the ground to be closed for a period), while the League merely suggested—but did not order—that clubs with ropes surrounding their pitches install rails instead, ‘and take every precaution to prevent spectators crossing the playing pitch at the conclusion of their matches’.

Olive Grove, the home of Sheffield Wednesday, had what was described as a ‘massive iron railing’ around its pitch, but this didn’t stop spectators pelting the referee (John Lewis again) with mud, or using unseemly language during a match against Stoke, which Lewis had to abandon after seventy-five minutes. Again, a verbal reprimand was handed out, but, as history has shown repeatedly, it amounted to a virtual admission that the League alone was relatively helpless in the fight against hooliganism.

Similarly in October 1895, after yet another assault on a referee, at Wolverhampton, all clubs were ordered to provide a dressing room for the referee and visiting players ‘in a convenient position on the ground’. A relatively innocuous provision, one would have thought, but no sooner had the order been made than it was revised to read ‘It is desirable’, rather than ‘required’.

Complaints about referees from clubs were frequent, often including accusations of bias. They were rarely upheld by the League. The following is a particularly bold example:

But when Darwen made a five-point complaint about Mr Jeffries after their game against Wolves in October 1893, the Management Committee was incensed. It rejected two points as unproven, and two others as being within the referee’s sole judgement. The fifth charge—‘that in our opinion he was under the influence of drink’—the League regarded as ‘outrageous and totally unfounded’, and Darwen were ordered to withdraw it unconditionally and pay all the expenses of the maligned Mr Jeffries and other witnesses.

Eventually, it all came to be too much for some referees:

It was around this time that dissent started to become a real problem in League football. If it wasn’t a case of players constantly questioning decisions, it would be clubs demanding that certain referees were not appointed to their games.

By 1907, referees were sufficiently fed up with all the criticism and extra public scrutiny that they took the unprecedented step of sending a petition to the League, signed by thirty-eight League referees. It read:

‘We the undersigned members of your official list of referees for 1906/07 do hereby respectfully ask you to seriously consider whether the time has not arrived when the remuneration given shall be more commensurate with the work done.

We think the duties have become more onerous; the amount of criticism we are subject to, and the great responsibility resting upon us in competitive matches, justify us in making this appeal for a considerable augmentation of the present rate of payment.

The majority of your referees, in order to fulfil engagements, often involving tedious railway journeys, make considerable financial sacrifices so far as their business callings are concerned.

In presenting this petition we have every confidence that you will give the matter your careful consideration, and we hope and feel assured that it will be met with a favourable result.’

Indeed, the League—and, by implication, Charles Sutcliffe, whose job it was to assign officials to matches—were accused of favouritism. In particular, Stoke were unhappy at the performances of one Mr Stott of Rawtenstall—the home town of none other than Sutcliffe himself. His displays were monitored, as he was indeed found to be sub-par, and was struck off. A new system of appointing referees was established, whereby officials were nominated by the clubs, who would then elect thirty to serve for the season. (The Management Committee could appoint six of their own choosing.) Not that this sorted much: referees still suffered abuse from fans and complaints from clubs, and some were just not up to scratch. For example, Nat Whittaker, who came joint fourth in the clubs’ ballot,

was at the centre of a disturbance on New Year’s Day [1908] at Barnsley, where the crowds were said to have ‘exhibited hostility’ towards him. At the subsequent enquiry, Barnsley were fined £10 for the crowd trouble and Whittaker was exonerated from blame.

But in private, the commission found that Whittaker, ‘while in West Yorkshire and Lancashire for the purpose of acting as referee in certain matches during Christmastide, did not keep himself in the condition that the FA and Football League have a right to expect from persons who are appointed to such responsible positions’.

The commission suggested “that a hint be conveyed to N. Whittaker to retire from our list of referees at the end of the present season”.

At least he hadn’t been totally sloshed, unlike a linesman exactly a year previously, or the one who had been “helplessly drunk in the street” in Sunderland after a game. Other offences for which officials got gate included betting on games, owning a pub, stealing a vehicle to make it in time for kick-off, and being accused by a divorce court judge of “disgraceful conduct”.

forbidden to fraternize with players, on or off the pitch. The Committee wrote to Mr Bamlett of Gateshead pointing out ‘the undesirableness of of speaking to a player during a game’. W. Bristow of Stafford was told not to compliment players on their play.

Finally, arguments about the value of extra officials are nothing new. In 1935, Committee member Will Cuff, with the backing of Sutcliffe, unsuccessfully proposed that a second referee be added to the game.

‘The referee now needs a Bluebird car to keep up with play’, Sutcliffe had argued in a broadcast. One club official’s response was: ‘It’s bad enough with one referee, never mind two!’

So next time you whinge about officials, just remember: not only are you being boring, you’re being boring and unoriginal.

Sutcliffe founded and was the first president of the Referees’ Union, and was a member of the League’s Management Committee for forty years. From 1936 until his death in 1939, he served as president. Inglis writes: “with the possible exception only of Alan Hardaker, the League’s secretary from 1957-79, no man has ever had a deeper or longer lasting impact on the League than Charles Sutcliffe”.

This and all other quotes and info are taken from Inglis’ book.

Not really. He actually wrote: “I think it is only fair to add that there could be no doubts about the justice of Mr Sutcliffe’s decision”. But did he see the replays?

Career? It was more like an obsessive hobby: like Sutcliffe, and many other League referees of the time, Lewis never accepted a fee, donating it to charity instead.

He wasn’t merely teetotal: he was “a militant abstainer who, according to the Daily Dispatch, ‘hardly missed an opportunity to speak out against drinking, smoking and gambling … he was a fascinating subject for the student of psychology. He was, in short, a Puritan, living hundreds of years after his time’.