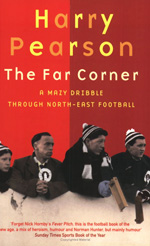 The relation of writing to sports, most of the time, is explanatory and parasitic, like the relation of the moon rover to the moon. The purpose of nearly all sportswriting is to inform readers of what goes on in a distant sphere which they are themselves largely unable to visit: what happened at the match that they couldn’t attend, or in the board meeting to which they weren’t invited, or in the coach’s thoughts that they lacked the superhuman capacity to read. Language is the instrument that makes this transfer of information possible, but it isn’t the thing itself, it isn’t the purpose; no one reads sportswriting for the sentences. Mostly, whether you’re reading an opinion piece or a match report, you just hope the sentences will be clear and efficient, and try to see through them—try not to think about them—the same as you’d do with a window.

But language is always there in sportswriting, as much as it is in poetry or fiction; the stuff is made out of words, after all, and so even if the problems and possibilities of language remain relatively below the surface in, say, the average report on a Bolton-Everton match, the writer who wants to engage them is always free to do so. There are any number of ways to imagine a relation between language and sports that isn’t what you’d find in the Telegraph.

One way would be to think of sports not as a subject for reportage but simply as an occasion for a piece of writing: not, in other words, as a set of events that have to be accurately explained and interpreted, the emphasis always being on the events, but as a theme upon which a writer can create a performance with words. A good metaphor, in this way of thinking about sportswriting, doesn’t have to link two points in an argument or to serve some analytic purpose; it can be the purpose, just as, when Saul Bellow describes the “pale, fox stain” of a woman’s freckles, the idea is only partly to describe freckles, and more largely, more exhilaratingly, to use them as a ground to demonstrate the effect of those particular words on the memory and the mind.

What I love most about The Far Corner, Harry Pearson’s great account of the north-east of England during the 1993-94 football season, is that in its unpretentious way it does something like this with words. Pearson clearly loves his subject, but there’s always a sense that, loving it, he wants his language to live up to it, wants to recreate it in the style of his sentences rather than simply imparting the relevant information. And so his memoir is a great, giddy, comic whirl, in which half the energy comes from the bizarre stories of the out-of-the-way corners of football that Pearson visits, and half comes from the sheer joy of language, the delight of the outlandish description or the unexpected word.

He’s really good at this, and not just for a sportswriter. He describes Bryan Robson’s crashing style of play by speculating that Robson is “joy-riding in a stolen body.” He describes character with the depth of a skillful novelist, as in this passage about Brian Clough:

If it was easy to picture Clough on Teeside it was easier still to imagine what people would have made of him; a slight, young man with a quick mind and a fondness for giving people a piece of it. He’d have been a cheeky bastard, a big-mouth, a clever bugger. In Saltersgill and Belle View they must have been queuing round the block blowing meditatively on their knuckles. You could see, too, how when that physical pressure was gone his self-confidence would bulge out like bread dough from the fridge set on a warm stove. He’d get bends of the ego.

This is as good as anything in Zadie Smith or Jonathan Franzen—the quick confidence with which the character’s lines are drawn, the swift, sharp detail (the crowd not just blowing on their knuckles, but blowing on them meditatively), the nimbleness that skips from one metaphor to the next, from bread on the stove to the wonderful idea of “bends of the ego.”

Pearson is a funny writer, as everyone says he is; but like Dickens, to whom he occasionally alludes (and trust me, if you like The Far Corner, Bleak House will send you twelve stories high), Pearson has a comic sense that begins in the anarchy of words, in the delighted, slightly terrified perception that if you look at them hard enough, they start to lose all meaning. He recounts a bit of overheard conversation at a match: an old man complaining, “Look at our defence. They’re stood there like grapes.”

In The Pickwick Papers a character makes a speech about a cricket match in which he repeats the names of the athletes so often, and associates them with so many ideas, that they finally become a kind of inspired nonsense. Pearson’s favorite trick in The Far Corner is to end a joke on a proper name, in such a way that the laugh that results is as much about the sounds of the words and their faint echo of meaninglessness (since the joke would be formally complete no matter what name it ended with) as it is about the person being satirized: “I used to think my father was the only man in the North-East who couldn’t kick a football properly. Then Newcastle signed Alan Gowling.” In the same spirit, he repeats Bobby Robson’s famous comment on Bryan Robson: “I need Bryan Robson to be Bryan Robson because that’s the only Bryan Robson I want.”

This isn’t a book for a reader looking for tactical insight or scrupulous reports of matches: Pearson spends as much time describing crowds, stands, pubs, shops, towns and trains as he does describing the games he attends. (And even these, he frequently leaves before time.) But if you’re interested in the way the game interacts with culture, and if you’re interested in the way that language interacts with sports, and if you somehow haven’t read it yet, you should really give it a try. I can’t think of a football book I’ve enjoyed more, or one that I’d rather recommend.