We follow sports because we want someone to win. This follows from our involvement in sports at the level of tribal loyalty and from our fascination with sports as a vehicle for stories: identifying with the team of our nation, city, town, neighborhood, or simply of our own free choice, we want a particular outcome for our team, want the story to end, as it generally does for heroes, with their triumph. We feel a psychic connection to them which is very hard to describe, one that, like so many aspects of sports, blurs the distinction between life and aesthetic experience. We can see the importance that this connection has in our experience of sports from the way that, faced with a game between two teams that have no particular meaning for us, we will often choose one to cheer for for the duration of the match. Sometimes this even happens unconsciously; we simply find ourselves favoring one team over the other, as though our tribal allegiance had somehow been temporarily conferred on them. And sometimes, almost to our own surprise, this sort of temporary allegiance can rival our more permanent loyalties for the intensity of the feeling it arouses. 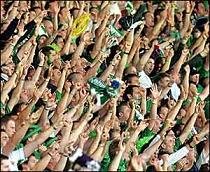 This is all on the surface, obviously, of our experience of sports—turning on a match, I mean, we think “I want my team to win,” not “I am looking forward to the blurring of life and aesthetic experience.” But this surface involvement hints at one of the deepest elements of our fascination with athletic competition, at the way in which football, for example, puts us in touch with something profound in our position in the universe. Sports shows us, more nakedly than we are used to seeing them, both our desire and our powerlessness. It shows us our longing to be able to will the universe to take a certain shape—which is what we are doing, really, when we are pleading for a goal—and it gives us, briefly, the illusion that our wishes have force. And then it shatters the illusion, and shows us that what we hope for has no bearing on what happens.

This last lesson is a difficult one to learn, perhaps even impossible to learn completely, which is why so many people come to believe, often with total sincerity, that their participation as a spectator brings a kind of curse upon their team. We all know someone who cares about a team so passionately that he can never allow himself to watch them play, because “every time I turn on the match, they lose” or “I’m telling you, I’m bad luck.” In these cases the person has learned that his wishes won’t bring about their desired results, but rather than concluding from this that his wishes are irrelevant to the universe, he has held on to his belief in the controlling power of his thoughts by imagining the control as negative: whenever I make a wish, the opposite comes to pass.

For the rest of us, we seem to learn the lesson, but we go on wishing despite it. Given the pain this so often inflicts on us, I have often thought that we would be healthier if we cared less about outcomes in sports and followed mostly in the hope of seeing good play and a good story, whatever the story might be. Often I resolve to take this approach myself. And then, turning to a match that’s already underway, a match in which I have only a vague rooting interest, I see a replay in which Craig Gordon fires the ball sixty yards down the pitch at the Parc des Princes, and the ball catapults off James McFadden’s foot and into the net. And I watch the next half hour in a state of fear and joy as great as anyone’s there, as great as if I were connected to the match by a line that runs beneath my understanding.

Read More: Football as Philosophy, Why Do We Follow Sports?