The Last Kings of Scotland 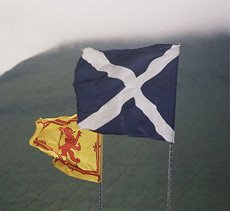 My most exciting moment in football this year was a goal I didn’t see. I couldn’t find a screen that would show me the Parc des Princes, and so most of Scotland’s win against France passed by with me trying and failing to watch it. By the time I found the game McFadden had already scored, and all that remained was the ragged, brave, desperate defense at the end, as the clearly overmatched Scots held on by the roughest conceivable form of inspiration. In fact, it was that visible tenacity, and not the goal I missed, that made the game so thrilling—a rebuke, I thought, to anyone who says that football must be dull when goals aren’t being scored, or that attacking play is the only place where the game is capable of beauty. The kind of joyful terror with which the Scots defended in those last twenty-odd minutes was as far as possible from a Brazilian highlight reel, but it was just as stirring to watch, and finally just as breathtaking.

With the exception of the free kick that shouldn’t have been, it was precisely the same in the match today against Italy. If anything, it was a better overall performance from Scotland, who managed to dominate most of the game and produce several passages of spectacular set-up play without ever looking like they were in the same class as their World Cup-winning opponents. I’ve already heard some grumbling from people who are sick of hearing about the Scots and their so-called heroism; and I know how the media make us cynics, how hype makes us turn on our own responses, how we start to believe that any story that’s subjected to the swelling-strings treatment must be really unworthy or wrong. But to my mind the way this Scotland team played went right beneath all that. They played in a way that called up the real emotions of which the media are forever making forgeries. That’s why they deserved to play in the final, and why, taking nothing away from either Italy or France, it will be a poorer tournament without them.

The Last Kings of Scotland