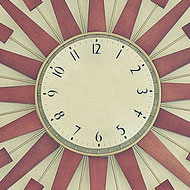 Over Brian’s last few posts about Pelé, we—RoP’s community of contributors/commenters and readers—have advanced the notion that history punishes perfection by consigning it to irrelevance. Perfection is so unrelatable that it becomes ahistorical. It supersedes the ordinary to such an extent that it isn’t even extraordinary: it simply doesn’t belong in any category of our own experience. We have so little truck with it that we forget to adapt it for the generations that will follow us. It just—exists, marking proto-geological time, questioned now and then for its usefulness, fundamentally immutable. In a worldview that discriminates between gods and humans, we are comfortably heretic. ‘Those who are heroes are known / Such as this man, who is the son of that other … / Thou hast no mother and no father / Thou resemblest a bastard child, God.’

In the rational view, perfection cannot exist in sport, because sport cannot accommodate a mathematical notion of perfection any more than history itself can. And even if Pelé achieved football’s value of perfection, which is possible, since he may be the greatest footballer known to us, it is not his records, or the specifics of his talent that have caused his myth to develop differently from that of the great footballers who followed him. How have those links between our present and Pelé’s past snapped?

I’m going to spoil you for the first few pages of Moti Nandy’s brilliant Bengali novella, 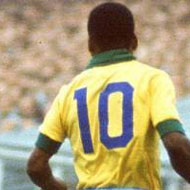 Striker, published in 1973 and set in contemporary Calcutta. In a crowded neighbourhood, a large, gleaming car stops to let out a prosperous, cigar-chomping football agent. He has come to the teenage protagonist’s house, attracting a considerable audience in his wake, hanging breathlessly on to every word of his. Yes, the agent has come to speak to young Prasoon. Yes, he does in fact have an offer for him. Yes, he wants to take Prasoon back home to play professionally for his club. The football agent is not from Ajax, Juventus or Real Madrid. He comes from Santos.

These opening pages were first read a mere three years after 1970, a World Cup that Calcutta followed via newspapers and post-facto magazine reports, through radio bulletins carried word-of-mouth around a crowd and black-and-white photographs. In an age when telecommunications did not mean what we think they mean now, when culture lag and a controlled economy might have unmoored even this historic footballing city from the global moment, Pelé and his team became a watershed. To this date, Kolkata (as we now name it) contains a Brazil-supporting, Pelé-worshipping population equalled by few in Asia.

To go quickly over ground Brian’s already covered: we could say that the charm of this love story is rooted in that paucity of eyewitness record. Was Pelé lionised precisely because he was not hypervisible, and is his importance diminishing because we now live in a too-visual world? No. Football is not just a YouTube fandom. And in fact, this is the neatest evidence we have that ‘YouTube football’ is less significant to fans’ relationship with the game than is sometimes supposed. Because then Pelé highlight reels—undreamt-of by most football fans in the world in 1973, but available to us today—would be at the very top of our heightened expectations of a-ha moments, wouldn’t they? Someone like Marco van Basten, that early prototype of video-game footballers, would probably be the most worshipped goalscorer ever (hey, Bergkamp fans—I’ll see you outside). Can we then agree that football can be judged by a set of criteria that aren’t just restricted to visual comparison? Is it unthinkable that a community of football fans and players could apprehend the magic of Pelé even outside the stadium, outside of live coverage, outside of readily available video footage?

I believe this is part of the reason why we are unable to relate to Pelé’s iconography the way his contemporaries did. Our technical limitations are different from theirs. We cannot reconceive Cristiano Ronaldo out of a journalist’s description of an accelerating run down the wing; there is now no way to transmute a Riquelme pass into a sharp intake of breath over the radio. We have more access to the Pelé experience than our predecessors did, but the other pieces of that story are missing, the pieces that Moti NandyYou can read Nandy’s story in a diptych of his football novellas, Striker/Stopper, translated to English by Arunava Sinha and published this year by Hachette India. and his characters got. The hero of Striker, Prasoon approaches the end of the prologue dizzy with joy, ready to go out and embrace the world in a Santos jersey—until he realises that he should not be understanding the agent, since that gentleman is speaking in Portuguese. Prasoon recoils as he remembers that he does not speak the language. He wakes with a chill; he has only been dreaming. 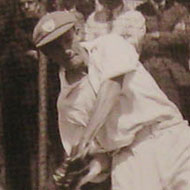 Brian mentioned in an earlier post that football is not a sport where narratives are confirmed by statistics, and this makes a notable departure from the history of a sport like, say, cricket, where Don Bradman’s average goes a long way to establish his genius even to who were those born generations after he played his last Test. But Bradman reminds me of an important link in the narrative of greatness, and that is its inheritance, or continuity. Aussies, hear me out to the end of this paragraph. I write from a subcontinent where a candidate for the position of the second-greatest batsman ever has been plying his trade for the last twenty years. For those unfamiliar with cricket, a cursory Google search for ‘Sachin Tendulkar’ will establish his credentials and his unprecedented reputation in India well enough. As it happens, one of the cornerstones of that reputation is a famous endorsement from an aged, long-retired Don Bradman, who, on watching the young Tendulkar bat, remarked that he reminded Bradman of himself. The baton passed; it signified, in however limited a fashion, Tendulkar’s worthiness to take up the mantle of history. But it also signified something else: Don Bradman himself. To generations nourished by the Tendulkar spectacle, it is not just Bradman who contextualised Tendulkar; it is Tendulkar who gives us a sense—again, in however limited a fashion—of what Bradman was. It allows us to imagine a cricketer who was apparently like Sachin Tendulkar, but better.

It’s easy to relate this to the short-term phenomenon of Maradona and his heirs. Some of us can remember and compare Diego himself with his most emphatic inheritor, Lionel Messi. Argentinian football may be different three or four generations from now, but the Maradona standard has continued to be applicable to every potential national #10 over the last two decades, as some putative successors have learned to their cost. Yet to whom, similarly, does Pelé compare? The astonishing depth and variation of genius—and drama—in Brazilian football has ensured that there is no predictable pattern of succession that allows us to link any one player to Pelé. Better than Ronaldo—almost unthinkable, but then Ronaldo is a #9. Better than Zico—tactically appropriate, but hardly embellishing the legend. Better than Robinho—I’m going to stop here now. But I hope it’s easy enough to see that sports history is to some degree atavistic, and Pelé, partly thanks to his own talent, partly thanks to the multifarious ways in which Brazilian football has developed and succeeded in the years since he played, does in fact stand alone.

Self-preservation doesn’t have quite the public currency that self-destruction has. Even so, Pelé hasn’t preserved himself, in his long and apparently healthy life post-playing career, as a paragon of dignity. In my darkest moments I imagine Paolo Maldini, thirty years from now, shilling for the latest performance-enhancing drugs from Big Pharma and making bright, crazy predictions of success for the football team of Padania. Would a future generation be able to construct any coherent notion of his grace and dignity as a player in the face of such annoying evidence to the contrary? Would such a figure convince you to evaluate his history impartially?

If football is not merely the totality of visual evidence, then surely, what footballers do off the field and after their careers matters to their legend. Pelé’s long career as a public figure has forced him not only to negotiate his own personal and professional commitments in their media representations, but also the changes in the nature of those media itself. His anchoring institution is not a national team (at least not the way the albiceleste are for Maradona) or a club (as is Alfredo di Stefano’s): it is FIFA, a constituency which does not come with its own loyalist fan base, except presumably in the offices of Coca-Cola. This has reconfigured the Pelé myth in interesting ways. By yoking his career irrevocably to memories of the World Cup, his club career has been relatively ignored. By associating him exclusively with the champagne effect of victory, his story defies the longer haul of football’s rhythm: the ins and outs of a season, the tensions of tournament politics, the bitterness of failure and the anticipation of a mollifying change of fortune. Can such a man have a real story? How does that peerless career compare with the operatic wonder and terror of the last days of Zinedine Zidane? If football were The Lord of the Rings, and Zidane did to us what Denethor did to Pippin, then how does Pelé appear in our recent experience of international football—as Tom Bombadil? Ring a dol dillo. 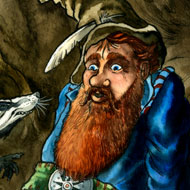 But bear with me a moment. Tolkien fans will know as well as I that Tom Bombadil is a contentious figure at the heart of the canon. He appears to us as a random, singing, omnipotent figure, a giver of gifts and an utterer of doggerel; he gives us tantalising hints of his powers, but remains an affable cypher from start to finish. Is he a deus ex machina, pulled out by the authorities at the start of the adventure to armtwist us into believing in their power? Is he a blip of probability in a predetermined world; the end of imagination, or its wildest flight of fancy? Why is he called Iarwain ben-Adar, oldest and fatherless?

Maybe Pelé is blessed with the fate of all origin myths, to be simultaneously ubiquitous and unrecognisable. Because he is the figurehead of a certain view of football. Perhaps that view significantly violates the chronological development of football and football celebrity. But who today escapes it? Doesn’t Pelé make it irrelevant to note that Puskás came before him and Cruyff after? He stands at the fount of all our conceptions of football heroism; perhaps only a stepchild of time can do that. It’s easier to forget such myths than remember them, but they also have a tenacity that allows them to exist, lapsed or current, long after the seasons have changed and the crumblier statues have become logs in the desert. Perhaps that’s what it really means to stand outside history.

Supriya Nair writes the football blog Treasons, Stratagems and Spoils, and can be found on Twitter here.