Pro Vercelli: The Nickel Objects of Our Dime Desire

The two implacable enemies of a successful football club are stagnation and arrogance. Stagnation leads to complacency, to a drowsy sense of timelessness. If things have always been and will always be as they are, why should we bother being fierce? Arrogance leads to laziness and a bitter, spoiled entitlement. If we’re special for who we are rather than for what we do, why should we have to prove it?

Like a hereditary aristocracy, in other words, a football club can only thrive with frequent infusions of new blood and a certain degree of external conflict. After winning a second consecutive Serie A title and a first European Cup, I wanted to remake Pro Vercelli over the summer: not to revolutionize the club or reject what made us successful, but to clear the sleep out of our heads, bring in some competitive new talents, and remind the core of the team that while the forgiveness of sins may be perpetual in religion, in football it’s just the opposite.

Fortunately, our new identity as European champions gave us both the financial clout and the reputation to chase after pretty much anyone we wanted. Unfortunately, the new glut of choice led us right into the maelstrom of big-club bidding wars and ruthless tapping up. As a result, I spent a good part of the summer chasing targets who wound up signing for more money elsewhere and making me curse their parents’ bones: no need to go into the excruciating details, but let’s just say that if you read in the Vercelli Soccer Express that Dominic Sène would be a White Shirt next year, €17.75 million and immortal imprecations from the red book of pain sped him to A.C. Milan, and if you heard on the radio that I was chasing Landry Fofana, a new €93k/week deal and a ringing malediction from the bowels of the earth kept him in place at Real Madrid.

That’s not to say we didn’t win as many as we lost, or that the team we’re left with isn’t fantastically intriguing (if anything, we probably had too much turnover; but more on that in a second). What the summer ultimately showed was how radical the Paolo Galli deal from last season really was, and how much better it was for us than for Juventus. On top of the €875k/month that they owe us till January 2021, we sold Jorge Luiz (the defender we got in the deal) to Parma for €15 million, and Antônio (the midfielder we got in the deal) to Barcelona for €20 million. That influx of cash was the basis for everything we did this summer. Here’s the cold breakdown of the major deals (i.e., apart from youth signings and the €1.5 million sale of backup goalkeepers I’ve never mentioned before):

Jorge Luiz (DC, Parma, €15 million) — He only made four starts for the club, with the emergence of our youth player Riccardo Caprioli, he was superfluous.

Albert Vrancken (ST, Milan, €32 million) — Another player who stayed with us less than a year. He’s a fine striker, but when the money from Luiz and Antônio allowed us to buy Dmitry Kozlov, we knew he’d be a third-choice player, so we floated him on the market. I turned down a couple of preliminary bids from Milan, and then they came back with this cannonball. This shattered the record for our highest-ever transfer fee (though I turned down Milan’s crazy, Kaka-to-Madrid-like bid for Teixeira—€65 million—at the same time).

Aivar Kulik (DR, Palermo, €3.8 million) — After the way he floundered in the Champions League final, it was clear his time had come.

Jefferson Arteaga (DM, Udinese, €4.8 million) — A good utility player for the club over the years, but he’s been utterly surpassed by our youth player Paolo Martini.

Davide Rubino (DM, Fiorentina, €9 million) — This one hurt, as Rubino’s been one of my favorite players, if not one of our most talented, for years, and earned the love of the club faithful by scoring two vital goals and the cup-winning penalty in the Europa League last year. But it was clear he wasn’t going to play much of a role after some of our other signings, and I didn’t want to see him fading to gray in the reserves. And what better way to get the attention of our superstars than to sell a player everyone knows I love?

Fábio (versatile, Real Madrid, €12.5 million) — One thing I want to emphasize this year is versatility. I’ve revised some of our tactics to give players more freedom to be creative on the pitch, and I’m going to follow that up on my end by being more flexible with formations and positional assignments—keeping in mind, in other words, that just because I think of the Ferj as a defender doesn’t mean he can’t also make a good midfielder under the right circumstances. Fábio fits this mandate perfectly: a 6’3″, 22-year-old Brazilian with silky passing skills and defensive bite who can play anywhere in the middle of the pitch. We were able to snatch him out from under Madrid thanks to a minimum fee release clause they’d foolishly added to his contract. I’m expecting him to spend most of his time as a central defender, but also to slot into other roles as needed.

Rafael Avilán (MC/AMC, Chelsea, €21 million) — The riskiest signing of the summer, and one I’m just hoping will work out. One of the biggest tactical changes I’m making this summer is to rewrite the role of our most attack-minded midfielder, sending him forward more aggressively and essentially setting him free on the attack to wreak as much havoc as possible. Kenji Mogi can do this, but he tires out easily, so I needed another elite attacking midfielder to play the part. Rafael Avilán is a bizarre player—he’s 5’4″, 136 lbs., yet has a strength rating of 18—and he’s spent much of his career on the bench at Milan and Chelsea. But he’s a force for the Mexican national team, and there’s a lot about him I like. Not my first choice, but honestly there weren’t a lot of good midfielders there for the taking this summer.

Dmitry Kozlov (ST, Barcelona, €21.5 million) — This is the signing the fans are excited about. Kozlov is one of the best strikers in the world, he averaged better than a goal every two games for Barcelona over the last three seasons (plus 44 goals in 66 caps for Russia), and he only changed clubs this year because of some unspecified falling-out with the Catalans. We had to pay him knee-weakening money to get him to sign (€110,000/week, around twice as much as our next-highest-paid player), but we should make up for it in shirt sales, and, hopefully, in bushels and bushels of goals. He has a tough-minded, heroic personality (“Reslient,” the game says), and he already doesn’t get along with the flamboyant and volatile Teixeira, but since they’ll never be on the pitch at the same time, I’m hoping it won’t matter.

Alessio Capuano (DR, Standard Liège, €5.5 million) — Kulik’s replacement at right back, a 20-year-old wonderkid whom I found languishing in obscurity in Belgium. (How did that happen? He’s Italian, for God’s sake!) Over time, he could be special.

Emanuel Sylla (GK, Milan, €7.5 million) — It’s a hard fact that Jacob Larsen, who’s been in goal nearly every game for us since we sold Marciano van Dijk in 2013, hasn’t developed as much as I’d like and, at 25, is angrily crammed into the “good, not great” category. At the same time, Milan have a tendency to buy up great goalkeepers and not use them, and when I saw that Sylla—at 34, a former legend in Ligue 1 who’s also the captain of Mali—was sitting on the bench at the San Siro, I had to make a move. €7.5 million might be a bit extravagant for a player who’s nearing the end of his career, but you also never know with a goalkeeper. He could play another four seasons, but even if he only lasts one, if he’s worth 3-6 points over Larsen, it will be money well spent.

This leaves us with a basic roster/substitution chart that looks something like this: 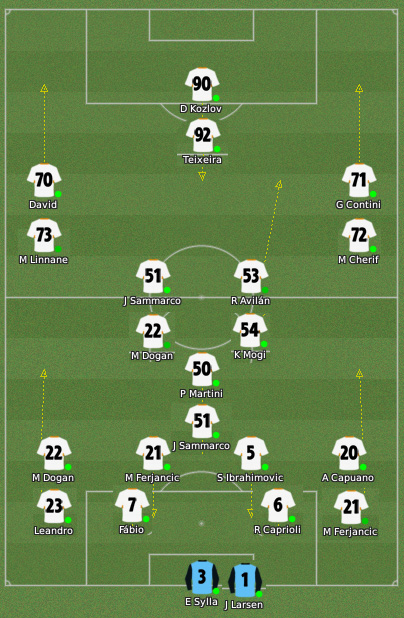 (If only I could play them all simultaneously. It’s like the ship from Galaga!)

And that’s roughly the story of the summer. We lost the Supercoppa Italiana 0-1 to Roma, ending our unbeaten streak at the Naming Rights, but it was the Supercoppa, and no one cared. This year’s Silvio Piola Cup featured Manchester United, Atlético Madrid, and FC Twente:

We lost 0-1 to United in the first round despite utterly dominating the game, then beat Twente 2-0 in the third-place playoff. We then retained the UEFA Super Cup by crushing Valencia 3-0 on a brace from Teixeira, which seemed to matter more in Vercelli than I ever would have guessed:

It’s always nice to have your name sung in the streets, but are we really “rank outsiders” at this point? Lousy East Coast media bias.

We open the Serie A season with a really tough away match at Inter, and if we can win that, I think we’ll be on our way.

Oh, and also, this happened:

It’s nice to be asked, and I thought about it for a couple of minutes, but who needs the distraction. Anyway, I don’t even know who “Marcus” is. There’s no one in football more forgettable than the Brazil manager.

Pro Vercelli: The Nickel Objects of Our Dime Desire