I Got Inducted into an International Criminal Conspiracy

On the way to the “meet,” all Grigoriy wanted to talk about was football, while all I wanted to talk about was the fact that Grigoriy was trying to induct me into an international criminal conspiracy. The thing was, though, I had to do a live blog about football in the extremely near future, while he didn’t have to a live blog about inducting me into an international criminal conspiracy. So I still wrote down his opinions on one or two things, while he ignored most of my questions.

Being Grigoriy, he had opinions on everything: Leo Messi (“when the water is flowing, a flood; but I begin to worry that it is too easy to turn off the tap”), Pep Guardiola (“the vigor of the American film industry at the moment the subtitle was invented”), Rio Ferdinand (“lips like a clam’s, but the bones of a theatrical trap door”). He thought Alex Ferguson “illustrates nothing so much as the principle that Caesar, too, must render unto Caesar.” But he was rooting for Manchester United, and when I asked him why, he shrugged. “Given the choice, I always prefer the English. As a mortician, I find we have much common ground.” 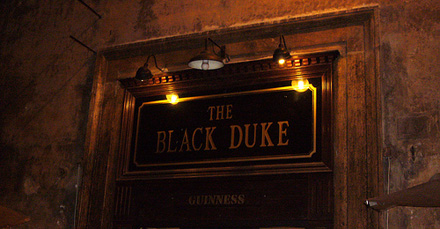 But all I could get out of him about his own situation was that he’d gotten into debt with some hairy people and was involved in something partly against his own will. “Let us simply state that the embalming trade, too, is subject to the whims of the global economy. The President sees himself as distinct from the Prime Minister. No one told him it would undermine my position.”

“The stone appreciates my work as much as he has always done. But the stone does not write checks.”

The car pulled up in front of a sinister-looking bar called the “Black Duke.” The man with the blanked-out eyes—Mr. Postillion, Grigoriy called him—got out and held the door for us, not exactly reverently, but with more of a making-sure-we-went-where-we-were-supposed-to-go attitude. I followed Grigoriy into the Black Duke, a dim, wood-paneled pub with exposed brick walls and like sinisterly Irish gold tintings. (You know how it’s like, the mirror behind the bar is a little bit gold, and you can’t tell why? The Black Duke had that quality. Like it was goldly rusting.) Mr. Postillion didn’t follow me in; I think he disappeared with the car. He hadn’t said a word to me, but it was weirdly relaxing to have him gone.

Vaguely, I noticed that the Black Duke was absolutely crawling with Manchester United fans.

The other two men at the table were a giant, brawly, red-headed slab of man-ham (“Truffle Lardimore,” Grigoriy whispered, “the computer hacker”) whose big, dense fingers looked like they were destined to cause unintentional death in an emergency heart-surgery situation, and a slim businesslike fellow, totally bald except for a baleen of hair over each ear. (“That’s Dancer,” Grigoriy whispered.) It was pretty clear straight away that all the other guys, even the ominous-looking Mr. Porphiry, deferred to Dancer and maybe even were afraid of him, even though there was no obvious cause, sort of like if you’d seen Ben Kingsley or Ralph Fiennes just rudely shred some helpless punk in the first scene of a crime movie, and you got from that that all his men knew that if they ever double-crossed him they’d be dealing with ruthless/crazy on a scale they weren’t prepared to match.

Dancer gestured to me to sit down, so I sat down. Grigoriy squeezed in next to me. “Hallo, Grigs,” Dancer said in a mild, soft-Cockney, probably-about-how-Ralph-Fiennes-would-play-it voice. “This the lad that’s gonna stump the polizia?”

“That’s all right, son,” Dancer said calmly. “Take it as it comes.”

“All Grigoriy told me was that you wanted me to help you steal something,” I said. “I just—I have a huge need to know what’s going on right now.”

“Have you ever heard of the Yucatan Gladius?” Dancer peaceably inquired.

“Why, the Yucatan Gladius is a butterfly. One of the biggest, rarest, most beautiful butterflies in all the world. Wings this big across.” He held out his hands to indicate roughly the diameter of a dinner plate. “A hundred fifty years ago you couldn’t take a shit in Mexico without coming across a Yucatan Gladius. But five years ago the last of the little buggers died off in a zoo in Dubai. Poof. Extinct. Fucked. And you know what did it?”

“Air pollution,” he smiled, casually crushing a French fry into a gory rind of ketchup. “Millions of years of evolution, if you believe in that; all that incredible beauty, but one whiff of carbon dioxide and the Yucatan Gladius was fucked faster than a reindeer at a caribou party. Which is where Dr. Alan Stone comes in. Do you know the good doctor, by chance?”

He spoke just extremely deliberately, I noticed, as if when someone had ripped him into iTunes, they’d accidentally ticked the box for “2-second track gap.”

He leaned forward and fixed me with a stare of incredible meaning and intensity. “Son,” he asked, “are you familiar with the high-stakes world of international lepidoptery?”

“Yeah, that’s right. Butterfly collecting. Butterfly collecting on an epic fucking scale. Our Dr. Stone has lined up a buyer for his pretty moths, and he’s fixing to make a sum that will mean he can throw out his old fucking jungle boots. He’s in Rome now to make the sale. Only we have a man who says that if the Yucatans happen to fall into our hands, he’ll pay us double what Dr. Stone was getting. Now isn’t that nice,” he mused furrily.

“I really don’t see where I come into this,” I insisted. “I mean, what I know about stealing butterflies in high-pressure situations is basically the minimum, I mean, my life has not shaken out so that I have had to pass that test.”

“Easy, lad. Take it as it comes. Now, Dr. Alan Stone has hired a private security detail to safeguard the bugs until the deal is made. Now, Truffles, what did we learn about the head of that security detail?”

“And what’s his weakness?”

“How do you think I got mixed up in this,” Grigoriy hissed.

“It’s the good constable’s favorite fucking website,” smiled Dancer. “So what we need from you is: In the 35th minute, you say Wayne Rooney had a goal called back for offside. That’s our signal to go. At halftime, you create a diversion in the stands. Roma ultras stabbing some well-behaved English nannies should do the trick. Keep it up till the polizia storm in. Then you make bloody well sure they don’t exit the stadium until you get the all-clear from us.”

“Getting our hands on the butterflies, precious. You leave that to us. All you have to remember is: 35th minute: Wayne Rooney offside. Halftime: Stabbing.”

“This doesn’t make any sense,” I insisted. “I mean, I’ve already blogged about some of this stuff. If Vitt Piccoletta reads Run of Play, won’t he already be suspicious?”

“Not a problem, son. Truffles here’s been filtering his packets. He hasn’t been seeing your posts.”

“The filter doesn’t lift till the game starts,” Truffles grunted.

“I don’t—this isn’t—” I looked around wildly in the booth. “Grigoriy, how did you even find out about all this?”

He made a face. “Natasha’s fiancé,” he said simply. “He has connections.”

The room started spinning all around me.

I Got Inducted into an International Criminal Conspiracy