Pro Vercelli: A Conspiracy So Vast

Our first transfer window was a disaster. It’s seriously hurt our chances of winning the league. And it’s my fault. All I can do is try to salvage the situation before I wind up—unthinkably—as the greatest manager only of my own lifetime, or of the last 100 years, rather than in the 4.5-billion-year history of Earth.

I had finally decided, after breaking down the strengths and weaknesses of the squad, that I needed to address our problem at centerback before I worried about the central midfield. (Our other major weak spot, goalkeeper, was out of play as I’d decided to gamble that Marco Palombi could be an inspirational captain this year.) I spent the bulk of my transfer budget on Paolo Mengoni, who, in addition to having the most Soul-Glo hair ever seen on a player from Salerno, looked like an ideal replacement as captain when Marco Palombi retired. I started looking around for bargains on midfielders. Then out of the blue Catanzaro made an offer for Matteo Cognini, our second-best centerback.

I’d had no intention to sell him. But the offer was €50,000—nearly twice what he was worth and almost as much as I’d spent on Paolo Mengoni. I sent back a counteroffer of €65,000 and decided to leave it at that: if they said yes, I’d certainly sell him, because €65,000 plus what I had left in my coffers would be enough to replace him with a better centerback—I’d recently discovered a 17-year-old named Nicolò Martinetti who was making my scouts break out in gooseflesh—while still having enough to buy the midfielder I needed to be competitive. I waited.

Then the reply came: yes. I pocketed the €65k, sent Cognini off to Catanzaro, and swooped in to make a bid on Martinetti, a player who’d be available for around €40,000 and who could possibly follow me all the way to Serie A. I worked out a deal with his club, the cash-starved Legnano, and offered him a contract. He accepted. Then, to my horror, a message landed in my inbox saying that Pro Vercelli couldn’t afford the transfer fee. But we had almost €92k in our transfer budget—I’d done the math myself—and the bid for Martinetti was less than half that!

I raced to check our finances, and discovered that, sure enough, our transfer budget was only €39,880, €53k less than it was supposed to be. The shortfall left us an agonizing €120 short of our agreed-upon deal with Catanzaro, and the board refused to augment my transfer budget by a single lousy euro.

If you’ve ever managed a club in your own right, you can probably guess what had happened. That’s right: the board had capped the amount of transfer income available to be reinvested in the transfer budget at 20%, meaning that while the club got €65k from the Cognini sale, only €13k of that was made available for me to spend on new players. Since our bank balance was several times as big as our transfer budget, I had just assumed there wouldn’t be a budget cap and hadn’t even thought to check.

A stupid mistake. A rookie mistake. And because I then decided to throw everything into trying to save the Martinetti deal only to find that Catanzaro wouldn’t budge on their asking price, I wound up losing my second-best central defender without bringing in a replacement, and without even identifying a new midfielder. I’d started the window with one good central defender, and after all my efforts I finished with…one good central defender. For the first time in my vast experience as a manager, I knew how Tottenham Hotspur felt.

No use crying over spilled milk, I told myself. Napoleon didn’t back out of the Battle of Blaamfinkers just because he couldn’t sign the corporal he wanted, and neither would I. I calculated that the only way I was going to take this inexperienced and mismatched team to the title was to get really serious about tactics. Not “I’ll kick it down the flanks because I have good wingers” serious. “Globally adjusting my staggered closing-down orders by one click for an away match to reflect the fact that playing on a larger field will increase the rate at which my players become fatigued” serious. It wouldn’t be pleasant, but neither is Alan Arkin. And he won an Academy Award.

I imagine every manager has someplace they go when they want to get really serious about tactics—some smoky back room in a little bar where Fabio Capello goes to find out what the old men think of David Beckham’s crossing. For me, that smoky room is a thread called Tactical Theorems and Frameworks, started several years ago by a manager called wwfan and updated, in a variety of online fora and by a growing list of contributors, for each new edition of Football Manager.

The ideas contained in TT&F have had their critics and their competitors, but in my experience they offer the most comprehensive and sensible guide to the possibilities of tactics in the game. I wouldn’t plug their sample tactics directly into my own game, and their approach can get extremely technical, but as an aid in designing your own strategies, it’s better than Sun Tzu.

I found that the 2009 version had been updated in the form of a 50-page pdf. I read it. At Pro Vercelli’s next training session, I tweaked the tactics I’d already devised to reflect some of what I’d picked up: for instance, that the two forwards in a 4-4-2 should have some space between their mentality settings so that the defense can’t stifle them with a single flat line. I also added a couple of new looks, giving me a set of quick choices to draw from in various game situations: an all-out attacking set, a counter-attacking set, a time-wasting defensive set, etc. Now it would come down to my players’ ability to learn the new schemes—which wouldn’t be helped by the fact that I don’t know Italian (and the game does model that, maddeningly-brilliantly)—and to my ability to apply them and adjust them at the right times. 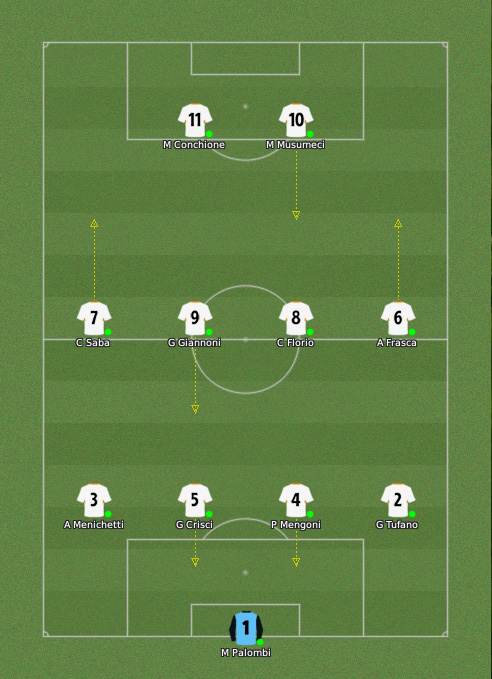 We’re now seven matches into the league season, five matches since I refined our tactics, and the results—predictably, given the youth of the squad and our difficulties communicating—are mixed. We’ve won two huge games against our major promotion rivals: the triumph at Carpenedole that Conchione won with his 35-yard free kick and a tough 1-0 home win against Rodengo, the team with the panda on their shield, on which more later. And we’re sitting in third place in the division, which isn’t a bad place to be given everything that’s happened. But while our defense has held up surprisingly well, only conceding one goal through October 5, our lack of a good midfielder has seriously hindered our scoring, and we’ve eked out three frustrating nil-nil draws against teams we should have beaten.

Still, it’s hard to get too frustrated considering the resilience our young players have shown in big matches. Carlo Saba, the 20-year-old left winger who I think is the key to our promotion chances, spent the first five games of the season on the bench. In the sixth, the crucial match against the pandas of Rodengo, I sent him on despite his being seriously unfit, kept my fingers crossed, and watched while he broke through the defense, held off a late challenge, and created the winning goal:

You can learn a lot about our team from this goal: the initial confusion of Maicol Musumeci, our 17-year-old center-forward, as he fails to notice the unmarked Saba, tries to find Conchione (his mentor, whom he always looks to when he’s in trouble), and kicks the ball right to the defense; the tenacity with which he gets it back and, catching sight of Saba just before the latter goes offside, finds him at last with a brilliant leading ball; Saba’s gritty run leading to the best cross any of our players has managed all season; and our right back, Giuliano Tufano, finally realizing that I want him to press forward on the attack and appearing in the box just in time to head Saba’s cross into the goal.

I may have pulled a Walter Colombo on the transfer window, but we’re getting closer, I think. I just hope we can learn how to score in time to catch the league leaders before their points advantage grows any further.

Pro Vercelli: A Conspiracy So Vast