I’m not sure this totally clears up the confusion over whether Tottenham own all this land, but they’ve released a “Public Consultation Booklet” about their new stadium project today that at least offers a more detailed look at what they see as the selling points of the project. It’s painfully brochure-like and community-focused (“Reach 2 Teach” is not even the worst program name in the booklet) but somewhere around page 7 it finally gets to the point. 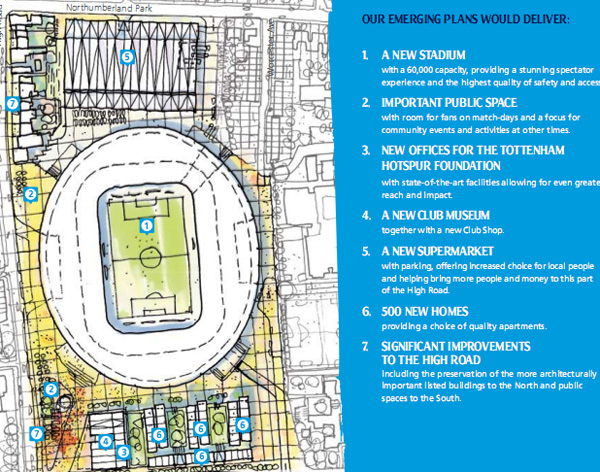 This diagram goes right to the heart of something I’ve always felt, which is that if you’re redeveloping a stadium anyway, you might as well throw in a new supermarket. With parking, of course.

Spurs are planning to accomplish the project in four phases:

Phase Two: Out of season, the North Stand of the existing stadium is demolished and a new pitch is laid.

Phase Three: The partially completed new stadium is in use for one season with a capacity in excess of the current ground. The remainder of the existing stadium is demolished.

Phase Four: Out of season the remainder of the new stadium is completed, ready for the start of the following season.

Interesting. They’re essentially planning to build the new stadium so that its southern half overlaps with the north half of White Hart Lane, staggering the construction so that much of the new stadium will completed before any of the current stadium has to be demolished. That at least answers some of the questions about how they mean to fit a 60,000-seat arena into the available space.

Also, I have to think that with Harry Redknapp on board, construction can be whittled down to two or three phases at most.

The booklet also provides some information about the companies Spurs have hired to carry out their plans: 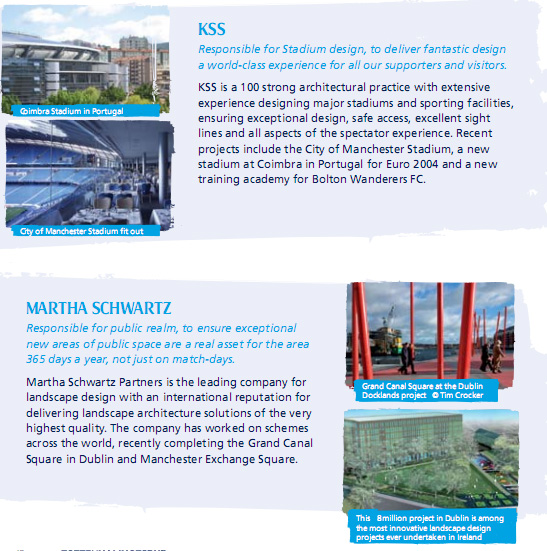 As always with these sorts of projects, it’s impossible to say whether what actually comes to pass will bear any resemblance to these early glimpses, which are more about marketing and persuasion than definite information. But the new booklet at least makes some of the claims Spurs have been bandying around a bit more plausible, and to their credit they’re at least projecting the image of a club with a plan rather than an Everton- or Liverpool-like club that can’t decide what it’s doing. It will be interesting to see what develops.