Barcelona’s 4-1 win over Málaga yesterday was a wet, nasty, mad-spattered slog, punctuated by a couple of brilliant goals from Xavi and Messi—as well as by 43 fouls and some companionable monkey chanting. What will stay in the memory of anyone who saw the match, though, is the pitch, which looked like an alien moonscape that was breaking apart under the influence of our Earth rain. There were inches-deep pools of standing water covering large areas of the ground; chunks of turf went flying wherever the players stepped. It was one of the worst pitches I’ve seen in a top-flight game, but it wasn’t all bad. Pet boa constrictors released at the touchline after growing too large for their owners were able to find a steady diet of swamp mammals, birds, and young alligators.

This gives you some idea of what it was like: 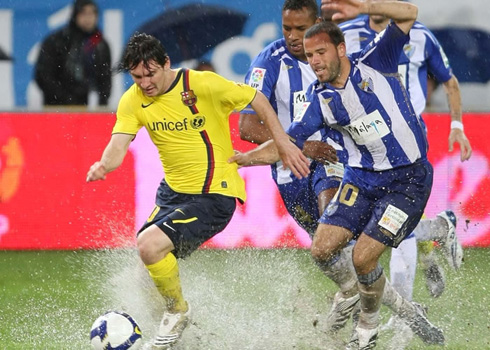 And you can see the conditions in the box (as well as Xavi’s superb free kick) here. Note that this is five minutes into the game: