The causes of landslides are complex and correlative, and their effects range dramatically, from the sudden release of a wave of mud down the side of a sheer cliff face to the massive structural collapse that causes a hillside to buckle and give way beneath a sea of falling trees. Typically, the landslide requires both “internal preparation” and a “triggering event,” both a slow, invisible transformation of the inner structure of the slope, for instance as a result of erosion at the toe of the slope or a catastrophic saturation of the upper slope by snowmelt, and the single precipitating incident, the twig brushed aside or the blade of grass set vibrating by the hovering of a nearby dragonfly, that upsets the precarious balance of forces created by this transformation and serves as the crisis that precipitates the gargantuan movement of earth.

Many events that technically qualify as “landslides” are in fact quite minor in terms of the amount of soil they displace and of their effect on their surrounding environments. It is perhaps best, however, to think of these as mere “geological incidents,” and to reserve the term “landslide” for what is in any case its role in popular usage: as an indicator of the overwhelming, cataclysmic, relentless and terrible subsidings before which the human brain pauses and the term “geological incident” appears futile and laughably frail. 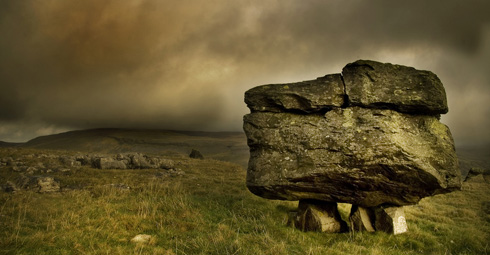 For anyone who has seen the Grand Canyon in the southwestern American state of Arizona, for instance, it is easy to imagine its entire edifice giving way in a sudden unstoppable avalanche of crashing rock and soil: red clouds of dust accumulating around the bases of the tremendous rock walls, thin rivers and rivulets of debris streaming down the sheer surfaces like water down a windshield in the rain; then the walls themselves coming down, huge chunks of rock softly breaking away and falling as if softly, breaking up and buried as they fall; finally, the whole acreage lying dismantled and silent, as if crushed from above by God. An event of this magnitude, with its tenacity and power, would warrant the application of the term “landslide” in a way that the mere casual deposition of a hundred-ton stone outcropping on some vulnerable highway bridge can hardly expect to match.

Because the forces it marshals are such that by their towering scale they cannot help but reveal the insignificance of human life in the universe, and because it applies these forces with a merciless indifference to human works or “culture,” the landslide has a capacity for violence that is as astonishing as it is inevitable. However, given the landslide’s supreme neutrality and the utter subsumption of its capacity for destruction in its own indifferent nature, to describe the landslide as “violent”—with the suggestion of malice that lingers in that term—is to mischaracterize it gravely. What the landslide is, instead, is thorough: it does what it undertakes to do, comprehensively and without regard for any other consideration.

It undertakes to disrupt mass, break trees, bury towns, erase roads, engulf homes, reduce mountains, and crush everything in its path. Considering the single-mindedness with which it accomplishes those goals and the unimaginable amount of weight it moves in order to do so, perhaps the best adjective with which to describe the landslide would simply be—hard-working.