This just got serious.

I’m not talking about our quest for redemption, although, having finished nine spots below our goal in 2008-09, we could use plenty of that. And I’m not talking about pressure on my job from the board, the players, or the fans, since they all seem fairly happy with the work I’ve done—happier than I am, anyway.

My wife has promised me a special Vercellese dinner—some kind of sausage-based rice dish; robust red wines of the Piedmont region—if we manage to get promoted. Obviously, this needs to happen. This needs to happen the way rainclouds need to rain.

So it’s time to get sharp. It’s time to crack this crazy enigma of a football club and unlock the greatness within.

The transfer window is underway, and as Daryl has explained, it’s a time that requires cunning and ruthlessness. Our club finances are in a precarious state (although a new sponsorship deal has spared us from complete disaster) and I’m facing a paltry transfer budget, a desperate need to cut salaries, and a transfer wishlist that looks like this:

Seriously, there’s no position I wouldn’t like to improve. Practically, I think Van Dijk can cut it at goalkeeper, our left back (Antonio Menichetti) is diligent and cautious, Mengoni is strong enough at centerback, last season’s wingers (Carlo Saba and Orlando van der Ent, our fabulously named import from Feyenoord) have enough flair to get by on, and…that’s about it. I can look forward to Jorge Ibáñez coming in on a free very soon, so that takes care of one of our striker spots.

In other words, I would ideally find: 1) a new centerback, 2) a new right back, 3) at least two new central midfielders, and 4) at least one good striker, to create a team like this— 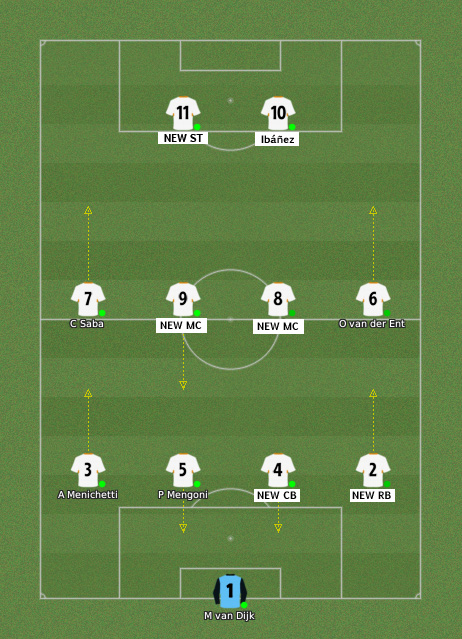 —on a transfer budget of just a few thousand euros and a wage budget that’s already stretched to the breaking point.

If I have to prioritize, and I will, I’m going to say that the CB and RB spots are the least important, as we were fairly strong defensively last season with Tufano and Crisci in those roles.

The MC spots are probably the most important: I think one of the problems we had last season was that I tried to import a game that was essentially too English for the Italian lower leagues, where all the pitches are so narrow that our wingers struggled to find space. We need to play more through the middle of the park this season, and that means not playing our backup right mid and a reserve defender with some passing skills in the midfield slots.

So this is where we are. The challenge is steep, but like the stranded Nazis in 49th Parallel, we can never give up, no matter how starkly everyone we meet in Canada seems to repudiate our belief system.

We’ll start by scouting the daylights out of every player on an expired contract we can find. Then I’ll swallow my aversion to loan signings and see if any big clubs would like to let us develop their talented youngsters for free. It’s not ideal. But after my horrific botching of last year’s summer transfer window, I’m determined to make it work.

Lastly: the Walter Colombo problem. As I may have mentioned, I’d planned to sack my surreally incompetent staff en masse this summer and replace them with my own choices. As it turns out, I can’t afford to sack even one of them—even Walter, who was last seen running repeatedly into a glass door while trying to bring me Chinese food—because their contracts have all been mysteriously extended for between two and four extra seasons.

The board is now renewing my incompetent staff’s insane contracts without telling me? I’ve never had this happen in an FM game before. I don’t like it. It means we’re facing at least one more season with physios whose combined physiotherapy rating is six, which is game-speak for “DIAGNOSIS: Ankle sprain. TREATMENT: Frontal lobotomy.” And Walter genuinely can’t seem to remember that I don’t like my coffee to contain several large spoonfuls of salt.

Well, we’ll just have to find a way. There’s a really appealing-sounding dinner at stake.