Pelé as an Ideal

“It’s difficult to talk about Pelé because I didn’t see him.” —Thierry Henry 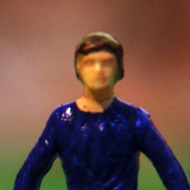 The end of my years as a teenager is approaching, which means I am soon to leave behind my life’s last opportunity to believe that I know everything. Already I can feel uncertainty slipping into parts of my mind that were once ironclad, airtight. “Is America really the best country on earth?” I ask myself. “Is there any substantive evidence to suggest that my 8th grade Social Studies teacher is the devil?” The perfect life I designed for myself seems increasingly unlikely by the day. I’ve even resigned myself to the fact that I will not attend Stanford, play for the Red Sox, or marry Julie Margulies, all things that once seemed as inevitable to me as the rising and setting of the sun. One of my few long-held opinions that has not melted into a little puddle of indecision is that Pelé is the greatest soccer player of all time. I believe this, as I believed most of the things that I am now crumpling up and discarding, because I was told so during my formative years. But given the shinier, sexier options of Maradona, Zidane, and Cruyff, why should I hold Pelé above all the rest simply because I was told to do so?

Pelé is just one of the many transcendent athletes whom I have never had the opportunity to watch at the height of their power. I am able to roughly approximate, however, what most might have looked like. When I watch Messi skip and gambol and score goals in ways that forcibly pull Ray Hudson’s vocal cords out of his mouth, I think of how Maradona must have been even better. Likewise, I have tried to replicate Michael Jordan through Kobe Bryant and Sandy Koufax through Pedro Martínez, all the while keeping in mind the superiority of the genuine article. This method works for me when YouTube (which keeps trying to tell me that Zlatan Ibrahimović is the best striker in the world) does not. Instead of seeing 10 minutes of Jordan’s greatest moments, I know the feeling of opening the paper every day for a month and a half and seeing that he’s scored 34 points again, because Kobe’s just done it.

Pelé defies my puny attempts to categorize him. Wikipedia describes him thus: “Pelé’s technique and natural athleticism have been universally praised and during his playing years he was renowned for his excellent dribbling and passing, his pace, powerful shot, exceptional heading ability, and prolific goalscoring.” There is no modern-day player who can boast all these attributes at the world-class level that Pelé inhabited. One could perhaps argue that Cristiano Ronaldo comes close, but if the skill set is similar, the playing style is most definitely not. Ronaldo is all stepovers and trombones; thunder and lightning condensed into a 6’1” container. But when I watch footage of Pelé, the word that comes to the forefront of my mind is deft. Pelé doesn’t smash through defenses like Ronaldo does, he fillets them.

The typical Pelé goal seems to involve him weaving around three defenders inside the box with subtle little taps and drags, leaving them on the ground, the ball in the net. He is so obviously on a different level that one can choke on the air of nonchalance he leaves behind. Even his longer goals seem almost languid by comparison to the modern, Gerrardian blast that dents the crossbar and liquefies the net. Pelé’s stay about a foot or two off the ground before dipping into a bottom corner inches beyond the keeper’s desperate fingers. Maybe Pelé’s greatest accomplishment wasn’t doing what we think of as impossible, but doing the things we think of as impossible with an ease that makes them hard to recognize as such.

But YouTube can only tell me so much about Pelé. And since there aren’t many highlight videos of him fluffing chances and sending crosses over his target’s head, I cannot fully comprehend him as a player because I cannot conceive his flaws. I can look to games where Messi is buffeted and kicked across the pitch to see an example of how a player like Maradona can be neutralized; there’s no one to look to for proof of Pelé’s potential for failure. Instead of being anchored in my mind to a modern version of himself, he’s become more than merely a soccer player to me. Brazil will always mean Pelé more than it means Robinho and Júlio César and Maicon. But Pelé even transcends the greatest soccer nation in the world. To this boy, Pelé simply means soccer the way soccer should be played. That’s why Cruyff’s ruthless geometry, Maradona’s fire, and any other quality of any other player are all dwarfed by the man who lets a child retain his belief in perfection.

Will Levinger is a student at Concord Academy.

Pelé as an Ideal