“We are ourselves” — that’s what Jürgen Klinsmann wanted to teach the players of Bayern Munich. He wanted them to “open up”; he wanted to get to know them, to “look inside” them, to meet their emotional needs. It was a philosophy of liberation — of helping players to get beyond the 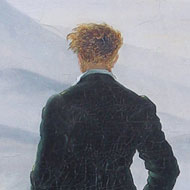 inhibitions of consciousness, back to some easy inner self. The Inner Game of Football. Zen. From Songs of Experience back to Songs of Innocence. (From “The Tyger” to “The Lamb.”) “It is very unhappy,” wrote Emerson, “but too late to be helped, the discovery we have made, that we exist. That discovery is called the Fall of Man.” You are wrong, Waldo, says Klinsmann. It is not too late. These players can forget their existence; they can once more play innocently, as though no one were watching; they can recover authentic Being. Each of them can be Der Wanderer über dem Nebelmeer, looking down with assured tranquility upon the quotidian world, far, far below.

Yeah, well, tell it to Jonathan Bornstein. Klinsmann’s Romanticism — or the version of it he articulated while at Bayern — makes a ton of sense if your players are well-trained, technically accomplished, and highly gifted athletes whose primary problems are a lack of confidence and a tendency to wilt under extreme social and/or on-pitch pressure. Watching the USMNT for the past few years, I haven’t seen a great many players who fit that description. The one U. S. regular who plays the way Klinsmann likes people to play is Clint Dempsey; it’s a safe bet that Deuce will be Deuce regardless of the coach, and for good or ill. The one U. S. regular who might well benefit from (what has to date been) Klinsmannismus is Landon Donovan. For much of the rest of the team, “We are ourselves” is pretty much what supporters are afraid of.

Not that they’re bad players, by and large — but the USMNT is populated chiefly by athletes who have skills in some areas while manifesting highly visible deficiencies in others. The midfielders are reasonably energetic and some of them see the field well, but they tend to be deficient in on-ball skills and passing accuracy; the defenders lack pace (and in some cases, lack awareness of their lack of pace). The forwards are admirable except for their inability to score goals or even get off shots. What can Klinsmannismus do for them? Very little, I fear.

So it seems to me that the first question to be asked about this new coach is whether he can adapt his preferred strategies to a very different cast of characters than the ones he oversaw at Bayern Munich. He is going to have to think about technique and tactics more than he has been inclined to do in the past; and, more important, he’s going to have to be able to teach technique and tactics. On the surface, this seems the kind of thing that Bob Bradley would do better than Klinsmann . . . which is not an encouraging thought. But if Klinsmann shows hitherto unsuspected abilities as a teacher, his manifest enthusiasm and charisma, coupled with his confidence in difficult spots, will be big plusses for the team. And thus for its supporters. I’m trying to be hopeful.