Pro Vercelli: New in the Lair of the Moon

It’s my birthday today, or as close as I get to a birthday this year, and I am pleased to report that I now own actual Pro Vercelli apparel. It’s a stylish pullover, and it conveys my imaginary loyalties. I’d like to think that the tiny digital version of me would wear it while suavely berating a referee’s assistant on the sidelines. Very nice.

There’s a quick comedown when you win promotion through a playoff, as we did last season. Your season doesn’t end until late June, meaning that instead of enjoying a leisurely month of scouting transfer targets and quietly revelling, you get thrown almost immediately into the preseason whirl of scheduling friendlies and being told that you’re the consensus pick of the media to finish 22nd in a league of 22 teams.  The bookmakers have us at 150-1. I’ve been promoted a lot of times in various Football Manager games, but I can’t remember ever taking a team into a new division with quite as strong a sense of not belonging there.  All the in-game messages seem to be converging on the single idea that it’s going to take a minor miracle for us to stay up.

Not that I’m complaining. We’re passing some major milestones, and I don’t plan to go back. Not only are we now one of the top 42 teams in Italian soccer, our bank balance passed the €1 million mark for the first time ever—then kept rising toward the €2 million mark. We sold 3860 season tickets this year—a 134% increase over last season’s total—and, best of all, finally signed a couple of players who are thought by our scouts to have Serie A potential.

The players: meet Jacopo Sammarco, our new 18-year-old defensive midfielder, and David, our 17-year-old Spanish left back, brought in as a replacement for the departing Stefano Ficarelli.

Here’s David. How do you like these stats for a 17-year-old?

David was really just a lucky find—I stumbled across him at Benidorm C.D. while he was in the middle of contract negotiations, and swooped him up on a free before any bigger clubs noticed him. He can play as a left back or as a left midfielder, has the potential to become a “good” Serie A player, and has a personality described as “Resolute” (my favorite).

Sammarco was more of a battle. He was co-owned by Livorno and Roma—so everyone knew about him—and when it became clear that neither team wanted him and he’d be available for significantly less than the €350k he was rated at, there was a scramble for his signature involving six or seven teams. I think we only won out because most of the teams who were chasing him were Serie A sides looking to use him as a backup, and I promised to make him a key player right away. (Which only made sense, since he’s almost certainly now the best player on the team.) He has an ambitious personality, so he was probably eager to have a club that revolved around him. In any case, we got him for €110k—€55k each to Roma and Livorno. He’d already make a “decent” Serie A player, according to our coaches.

Other signings: we brought in Landy Akassou, whom I already wrote about, to cover the left of midfield (I don’t think Carlo Saba can play in Serie B) and serve as a backup striker. We signed Matthias Cassano, a centerback who was on loan with us last season, when his contract ran out at Sampdoria. Other than that, it’s just a couple of loan players—Bicalho, a left back from Fiorentina who should give us some cover for David (I’m nervous about trusting the season to an untried 17-year-old, however talented he is), and Maurizio Monti from Atalanta, a backup defender. Here’s how the lineup should look: 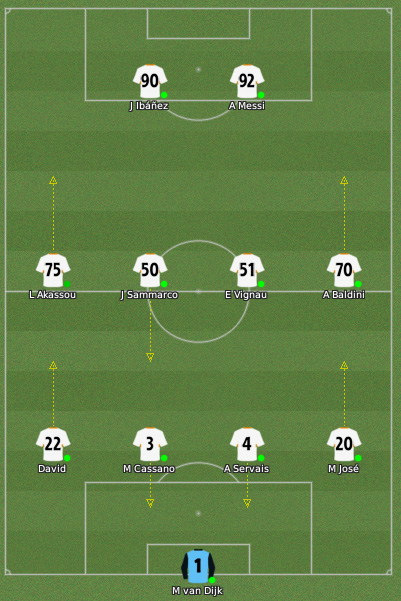 Can they play in Serie B? It’s going to be tough. A lot will depend on whether Ibáñez and Messi of Waidhofen/Ybbs can score goals at this level, which is almost impossible to predict in this game. Baldini is going to be a weak point on the right side of midfield, and I’m worried about our goalkeeping situation, but I couldn’t find suitable replacements anywhere during the transfer window.

Our preseason results were mixed. We opened with a 5-0 away win at Royn, a team from the Faroe Islands, then lost 2-1 to Celtic in a match that sold out the Silvio Piola. Our first Coppa Italia game was against Rimini, whom you’ll recall as the team that led Serie C1/A almost wire to wire last season only to fall to second on the last day of the year and miss out on promotion. We dominated them from start to finish and won 2-0, which surprised me.

Our next cup match was away at Catania: our first game against a Serie A side, which just happened to be the team from the town where my sister goes to buy vegetables. We weren’t quite valiant in defeat and lost 2-0. The team is clearly still meshing, and while I can’t single out any particularly worrisome trends, I’m still predicting grim battles to avoid relegation this season. They’re battles I’m determined to win. The league season is now upon us, and our first match is away at Treviso. It should tell us something. Updates soon.

Odds and ends: Spain won Euro 2012 with a 2-1 victory over Croatia in the final. Argentina won the Olympics with a 2-0 victory over a Spain U23 team on which David played left midfield. Messi of Waidhofen/Ybbs made it to the semifinal with Cameroon and scored two goals in the tournament, but had a strange experience in the semifinal match after a pregame injury to the Cameroon goalkeeper:

If Miguel José keeps getting match reports like this, I’m going to feel very good about not selling him. I am generally in favor of absurd aerial dominance:

Lastly, we sold our talented-but-horribly-slow left winger José Miguel to our arch-rivals Biellese for €60k during the transfer window. It seemed like a terrible deal for them, so I pulled the trigger, even though I don’t generally make it a habit to send players to the teams I despise. Is this a sinister plot from their manager, Luca Dori? Is Walter Colombo involved somehow? Will I regret this? We’ll have to wait and see.

Pro Vercelli: New in the Lair of the Moon