The man at the bar clinked the ice in his glass and peered up at the television through an ancient haze of smoke. There was a soccer game on, the away leg in Pro Vercelli’s promotion semifinal against Venezia. The man sighed and, if it were possible, slumped down even further in his battered linen suit.

“There it is! There it is!” cried a stranger at the other end of the bar as Jorge Ibáñez slipped through the defense and slotted the ball into the net for a 1-0 lead. The bartender looked up with a momentary interest, then went back to polishing his glasses. The man in the linen suit kept his eyes on his drink.

“Say, what do you think?” asked the stranger, sidling up next to him. “They’re looking pretty good to me!”

“No,” the man said softly. “Their tactics are all wrong.”

“What do you mean, ‘all wrong’?” The stranger’s brow furrowed quizzically.

“They’re playing a 4-4-2 with the width evenly distributed throughout the park. They ought to be playing a 1-7-3 all crammed up along the left side.”

“A 1-7…” The stranger’s eyes widened incredulously, and then he stifled a laugh. “Say, why don’t you go apply to work there? I bet you could be their assistant manager!” 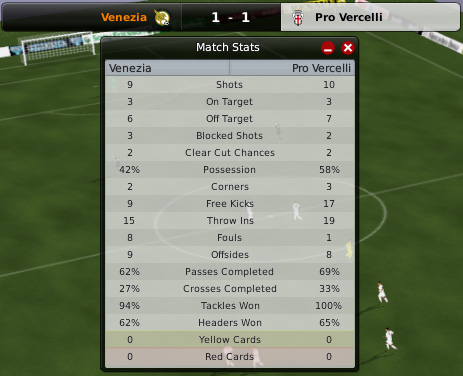 The promotion playoff was in a semifinal-final format, with both rounds including a home and away leg. As the third-placed team, we had fourth-placed Venezia in the semifinal, while second-ranked Rimini played fifth-ranked Portosummaga. If the scores were level after both legs, the tiebreaker was final league position, but—and this becomes very important toward the end—I didn’t know that.

We were starting at a huge disadvantage. World Cup qualifying was underway in Africa, and the coach of the Cameroon team thought it was better to have Messi of Waidhofen/Ybbs—our co-leading scorer and the fulcrum of our attack—sitting on the bench with him for the next month than helping us get into Serie B. That meant we’d be starting Luca Neri, who’d been kept out of the team for most of the last two months by the continued brilliance of Ibáñez and Messi, further destroying his self-belief.

On the other hand, I was happy to be facing Venezia in the first round. For whatever reason, we seemed to have their number; we hadn’t lost in our last five games against them. And we didn’t lose this time, either. We drew 1-1 in the away leg, as we’d hoped, then steamrolled them 3-1 at the Silvio Piola behind goals from Neri, Palomino, and Ibáñez to take the 4-2 cumulative win.

Portosummaga crushed Rimini (a team that led Serie C1/A for all but three weeks during the season), so they’d be our opponents in the final. And that’s where things got crazy.

“Damn it!” cried Luca Dori, throwing his shoe at the television. It bounced off with an unsatisfying plink. Smirking at him, he thought. It was bad enough that the club he managed, Biellese, were struggling to stay up in Serie D Group A; now he had to watch their hated enemies, the bloodless cretins from Vercelli, progress to within two games of the second tier in all Italian football! He was a patient man, he thought, but there was only so much a man could take!

He turned to his assistant manager, Mauro Palumbo, whom he frequently invited over to his house to watch football and eat vast quantities of meat he had killed himself. “This is too much, Mauro,” he said.

“Oh, I don’t know,” Mauro replied with a suggestive chuckle. “Don’t forget, they’ve got Akassou next. Should be interesting.”

For a moment, Luca Dori looked stunned. Then a slow, sinister smile slowly spread across his sinister face.

Portosummaga were a peculiar team. Their defending was dismal—they’d allowed 50 goals this season, by far the worst of any team in Serie C1/A outside the bottom four—but their own goalscoring was prodigious; they were the only team in the league to have scored more than 60 goals, and they had 66. Many of those 66 goals had been scored by their star striker, Landry Akassou, on loan from Atalanta. And it was his presence on the pitch that made our playoff final tie against them so unusual.

Pro Vercelli scholars may remember that Landry Akassou had been loaned out to us last season, and we’d tried to get him back this year—only for some reason he’d chosen Portosummaga instead. In the interim, though, he must have had a change of heart, because when his Atalanta contract neared expiration in January, he’d agreed to sign for us permanently and would be returning to the club just a week after the second leg of our tie. If his current team won and advanced to Serie B, he’d be left behind in Serie C with us next season. If he wanted to play in Serie B, his current team had to lose. I had no idea how it would affect his motivation.

The first match was the away leg. I was anxious. Keeping Portosummaga from scoring at the best of times was difficult, but keeping them from scoring at home was almost impossible. They’d beaten us there 2-0 in our previous encounter. I sent in a very defensive gameplan, hoping we could hold on for 0-0 draw. Akassou wasted no time in ruining that plan by setting up Pietro Caputo for a simple volley. Portosummaga dominated the game, Luca Neri wilted, Ibáñez was invisible, and only a great goalkeeping performance by Marciano van Dijk kept us from going down by two or three goals. Our 20-year-old right winger, Alessando Baldini, saved us by knocking Carlo Saba’s cross into the back of the net in the 71st minute. We held on for the 1-1 draw. It would all come down to the home leg. 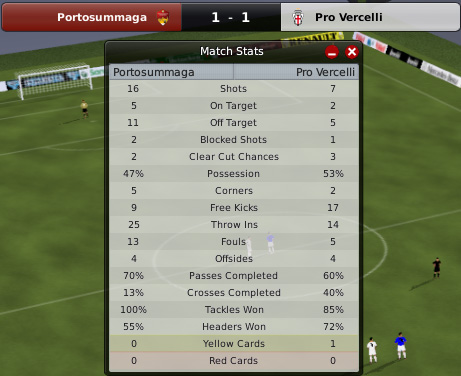