Pandemonium reigned in the well-lit offices of the Vercelli Soccer Express. Grizzled reporter Riccardo Nicastro (Personality: “Old and Boring”; Relationship with You: “Great Respect”) sat on the corner of his desk, explaining to a room of excitable young scribes that if Pro Vercelli won on Sunday, they would be champions of Serie C1/A and would play in Serie B for the first time since 1948.

“I don’t care about Brian Phillips one way or the other,” revealed Cristian Sannino, the web editor (Personality: “Enthusiastic”; Relationship with You: “Indifferent”). “But I agree it’s amazing! Jesus Christ!”

At the cafes and in the various piazze, talk of Pro Vercelli’s unexpected late season run went hand in hand with gossip about Italy’s chances in the “Group of Death” at the upcoming Euro 2012. Pro Vercelli chairman Paolo Ganci could hardly show his face in the town’s most expensive restaurants without being peppered with questions about the seven wins in eight matches that, combined with some late slip-ups from league leaders Rimini, had brought his club to within three points of the Serie C1/A championship. Fan spokesman Mauro Magri could hardly open his secondary Gmail account without coming across some expertly reasoned amateur analysis of Pro Vercelli’s chances in their last match, an away game at 10th-placed Arezzo.

“I like our odds,” he inevitably answered, copying and pasting the phrases from his “sent mail” folder with a thoughtful expression on his face. “Rimini have a three-point lead on us, but they have to play away at third-placed Vicenza, an extremely strong team at home. We have the advantage in goal differential and results between teams, so any win for Pro Vercelli combined with a Rimini loss will give us the league. Forza Pro!”

At the Silvio Piola, the players were getting ready. Carlo Saba, the team leader—technically he was the vice-captain, but with Gustavo struggling to get time on the reserves’ substitute bench, he was the de facto captain of the club—was reminding the depressive striker Luca Neri to take the long view. “Even if we lose, Luca,” he said, patting down the top of his helmetlike blond hair into a perfectly smooth encrustation, “we have to keep our focus. We’ll still be in the promotion playoff, after all.” 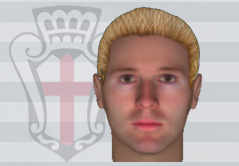 “I don’t think I could ever score a goal in a promotion playoff,” sighed Luca Neri.

“Hey,” Carlo Saba disagreed. “Don’t talk like that. You’re a great player. You just need to believe in yourself.”

In the team offices, assistant manager Manuel Marchini and I were busily compiling our team sheet. “I really think we should be starting Neri over Ibáñez,” Marchini opined. “He’s better on paper.”

“Yeah,” I growled, “well, that and a disposable razor will make it possible for me to commit the bloody crime of suicide. We start Ibáñez with Messi.”

At last, the day of the match arrived. The team was nervous; I could feel it. From the wrinkle of consternation that appeared over Carlo Saba’s nose as he gave me significant looks on the bus ride down to Arezzo, I could tell that he could feel it, too. Messi of Waidhofen/Ybbs was staring resolutely out the window, impassive between his faintly thumping headphones. Luca Neri spent the four-hour drive muttering to himself and ignoring Miguel José’s attempts at reassurance. 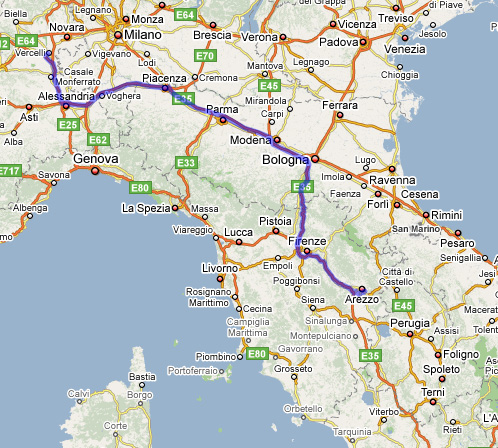 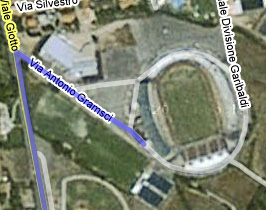 Partly because their morale seemed so shaky, I sent them out in a defensive formation, with the wingers tracking back, the fullbacks playing narrow, and nobody closing down too aggressively. Just stay between your man and the goal for now, I told them. I was hoping to play long balls from the goalkeeper and give Ibáñez and Messi of Waidhofen/Ybbs the chance to score on a breakaway.

Throughout the tense, testy first half, it kept almost working. Ibáñez got a number of one-on-one chances, but kept blasting the ball over the net. Messi got the ball in some promising positions, but kept dribbing in too close and having it smothered by the keeper. At the other end of the pitch, we limited Arezzo to three shots, and I started thinking that if we could hold till halftime, I could fire the team up with a pep talk and send them out with a more attacking mindset, trying to steal a goal in the early minutes of the second half.

All this time, of course, I’d been keeping tabs on Rimini’s ongoing match against Vicenza. Vicenza scored early, but Rimini equalized just before halftime. At almost exactly the same moment, five minutes into stoppage time, Vitale Provenzano intercepted a routine pass from van Dijk to Carlo Saba, laid the ball off for de Rosa, then pounced on the rebound of his missed shot and drove the ball into the net. At the half, Rimini were tied with Vicenza and we were 1-0 behind.

When I spoke to the team in the changing room, I tried to work on their confidence. Part of me wanted to yell at them, especially my strikers, who were rated at 6.0 and 5.9 for the half. But I sensed they were still unsettled, so I told them they could win the game and, as I’d originally planned to do, sent them out in more attacking lineup.

Vicenza retook the lead from Rimini in the 67th minute, giving us a window of hope. But Arezzo had come out playing with the flair of an underground bunker, and Pro Vercelli couldn’t seem to penetrate their defense. I kept telling them to be more aggressive, kept taking more dangerous risks, but all our shots—even from close range—kept going haywire. And, worse, Arezzo were creating chances on the counter, and forcing the saves from van Dijk that we couldn’t seem to demand from their goalkeeper.

When the final whistle blew on our 1-0 defeat (Rimini obligingly lost, but it didn’t matter) I felt, just for a moment, like Luca Neri. I may be the greatest manager in the history of the world, but promotion playoffs have never been my strong suit. I didn’t know exactly who we’d be facing, but I knew they’d be tough. At the start of the day, Serie B had seemed so close we could almost touch it. Now, in some ways, it had never seemed further away. 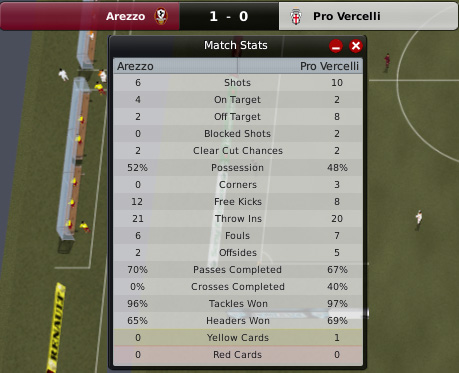 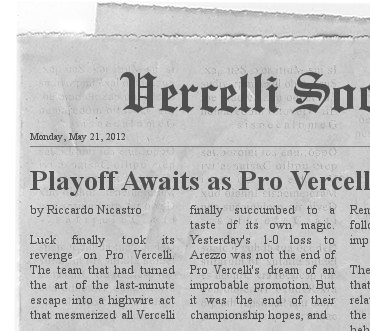 We wound up finishing third, behind Vicenza (who won the league despite never having led it till the last day of the season) and Rimini (who finished second despite having led for the last 15 consecutive weeks). Third was better than I, the media, or the bookmakers had expected for us at the start of the season, but to come so close to a championship only to falter at the end made it hard to feel very glad. It would take the promotion playoff to tell us whether or not we had a reason to celebrate.