An Inquiry into the Nature of Ana Almunia’s Ghost

A REPORT BY DR. CHESAPEAKE MARCHPANE, SPECIAL TO THE RUN OF PLAY 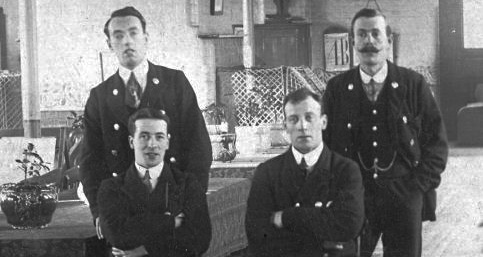 On a gray, overcast day in 251 A.D., St. Alban, the first English martyr, was decapitated by Roman soldiers on a hill overlooking the settlement of Verulamium. According to the legend preserved, nearly 500 years later, in the Historia ecclesiastica gentis Anglorum of the Venerable Bede, the man initially appointed to carry out the execution was so awed by Alban’s faith that he converted to Christianity and refused to kill his prisoner. A less susceptible soldier was found and, as he completed the fateful swing of his sword, his eyes fell out of their sockets and tumbled to the ground.

Alban’s crime, which sent the Roman magistrate into such a fury that he condemned him to be beheaded, was to have sheltered a priest who was wanted by the persecuting authorities and, when the soldiers came to arrest him, to have switched cloaks with the wanted man and given himself up for punishment in his place. The name under which this mysterious priest is now venerated, St. Amphibalus, is rather fittingly a false identity derived from Geoffrey of Monmouth’s twelfth-century mistranslation of amphibalus, the Latin word used for the cloak. It is however a cruel irony pertaining to the use of pseudonyms generally that the man known to us as St. Amphibalus was subsequently captured and put to death on the same spot as his would-be savior.

It was here, on the site of at least three religious executions (the soldier who refused to kill Alban having been martyred there as well), that the Benedictine monastery whose remains are enshrined in the present-day St. Albans Cathedral was founded by the powerful King of Mercia in 793. Perhaps inevitably for an abbey based quite literally upon a series of horrifying and miraculous murders, St. Albans grew in size and power until, some 400 years later, it was the preeminent monastery in England and served as the first meeting-place for the council which drafted the Magna Carta.

The monks of St. Albans exercised enormous influence on the realm around the abbey, and it is perhaps not merely an act of fancy to say that the gray rhythms of monastic life had a hypnotic effect on the surrounding countryside. The nearby village of Langelai, for instance, which was deeded to the monks by the Saxon Ethelwine the Black shortly before the Norman conquest, was in fact ruled by the monastery, an arrangement that was reflected in the gradual metamorphosis of the name of the village into “Abbots Langley,” as it is still known today. Abbots Langley existed almost literally in the shadow of the monastery and, one imagines, looked up toward the hilltop to receive the news of its destiny. 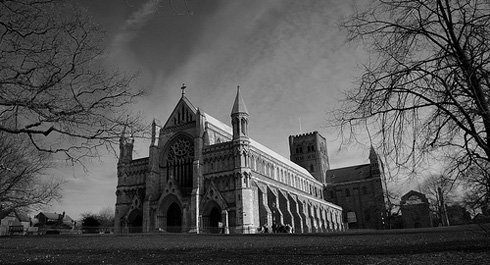 The children of Abbots Langley were sent to be educated in the abbey school, and it was here that Nicholas Breakspear, who was born in the area, spent his youth before rising by somewhat mysterious means to become the only English Pope, as well as the first to be forced to the rather astonishing step of placing Rome itself under papal interdict. In any case, despite occasional hints of a lurking propensity, perhaps concealed within the ground itself, for insanity, evil magic, and violence—an unusually severe outbreak of the Black Death in the fourteenth century; a wave of blood during the Peasants’ Revolt in 1381—the abbey and its subservient village seem to have coexisted in relative harmony.

At first intended for the task of producing robes or cloaks for the monks, Langley evolved in its role over time, and by the tenure of the Abbot Geoffrey its purpose, according to Volume 2 of the History of the County of Hertford edited by William Page and published in 1908, was to supply “a number of cheeses,” yearly, to the abbey kitchen. 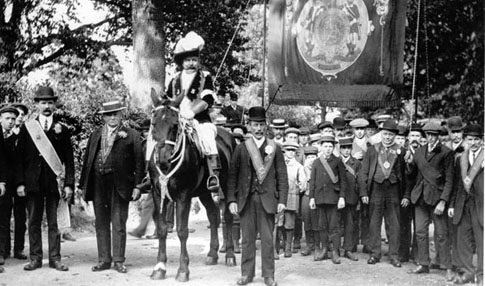 A fine rain was falling on the lawn when, on the afternoon of 9 October, 1870, the Leavesden Asylum opened its doors to admit its first patients. The Metropolitan Asylums Board, which had been established by the government of Queen Victoria in 1867, spent £7,600 for 80 acres in Hertfordshire on which to build its hospital for “quiet and harmless imbeciles.” Over the course of its 125-year existence, the purview of the institution would expand to cover victims of lunacy, psychosis, and epilepsy. 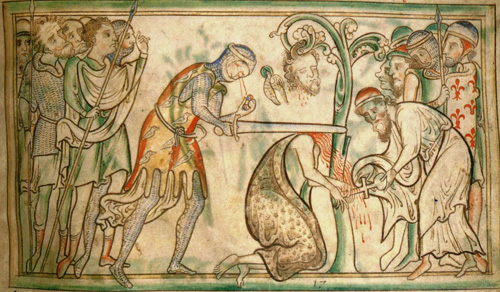 Patients at Leavesden—which, while the monastery of St. Albans was no longer in existence, may be said to have occupied similar ground, as the Asylums Board had seen fit to build it just outside the village of Abbots Langley—were segregated into male and female wards and watched over by a staff that numbered nearly 100 in the 1881 census. A large vegetable garden was tended by a “Mr. E Buckingham,” who was hired at a rate of 25s. a week “to ensure a supply of vegetables for the Inmates.”

Discipline was strict, for the staff as well as for patients. There is a recorded instance of the hospital chaplain being reprimanded for hopping over a fence rather than walking through the front gate. Patients who were capable of working were given tasks to perform on the grounds. In lieu of the long woolen robes that were historically traditional at many hospitals for the insane, the mad seamstresses at Leavesden were permitted to make corduroy suits, complete with neckerchiefs, for the male inmates, and long dresses with shawls and bonnets for the female.

Recreation was an important part of the course of treatment at Leavesden, and considering this spirit it is perhaps no wonder that the asylum would eventually lend its name to a successful football club. From early in Leavesden’s history a weekly dance was held for the patients, with music provided by an asylum band. A Turkish bath was built on the grounds in 1876. In 1884, the chief medical officer of the hospital permitted smoking after declaring that he considered “the use of tobacco absolutely necessary in the treatment of the insane.”

The precise circumstances that led to the founding of the Leavesden Asylum Football Club appear to be lost to history. It is known that a team under that name joined the Western Division of the Hertfordshire County League in 1908, and were runners-up during the 1909-10 season. Whatever the relation between the hospital and the team—whether the first players were members of the male staff, or whether the hospital merely sponsored a local side—Leavesden Asylum F.C. quickly became successful enough to send a number of players on to more prestigious leagues, including the winger Bill Cox, who went from Leavesden to Watford and finally to Charlton Athletic in 1921; the legendary Reg “Skilly” Williams, who made 341 appearances in goal for Watford before joining Brighton & Hove Albion; and Cyril Walker, a striker who played for Sheffield Wednesday and Norwich City.

Leavesden Asylum would eventually win the Herts Western championship in 1913 and 1914. After the war, they won a third consecutive title in 1920, and won again in the Herts County league in 1927. Under a series of names which, like many pseudonyms, changed to reflect the suspicion inherent in the nomenclature of the times (Leavesden Mental Hospital Football Club, Leavesden Hospital Football Club) the club subsisted for decades, finally folding not too long before the hospital itself was closed in 1995.

THE HAUNTING OF ANA ALMUNIA

There were many ways in which the closing of Leavesden Hospital seemed to bring an end to the mysterious and provocative ties that had persisted in the region between religious violence, madness, magic, and football. There was still a church at St. Albans, but it was a cathedral, a tourist attraction. Abbots Langley was merely a suburb of London. The City of St. Albans—the former Verulamium—had its own football club, but it bore only the faintest relation to the deeper currents of history. Asylum Road in Abbots Langley was now called College Road, and the hospital buildings were being pulled down to make room for new houses. The klaxon that, according to at least one report, had been used as late as the 1970s to warn the town of the escape of a dangerous inmate, had long since fallen silent. 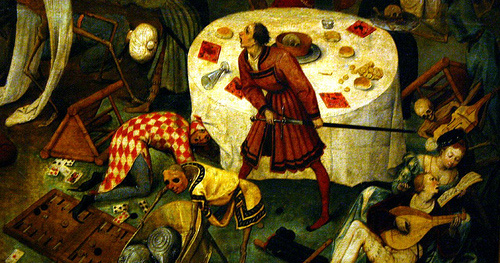 Then, as if by coincidence, on a day when the rainclouds were piling up in the northwest, Arsenal’s Spanish goalkeeper Manuel Almunia came unknowingly to live in one of the houses on the old hospital grounds. Now reports in the Sun and the Daily Mail suggest that Almunia has begun to hear the sound of chains scraping along the floors of his house, just out of sight; that he and his wife Ana have heard music playing, in distant rooms, in the middle of the night; that Ana has received visitations from a monk-like spirit, wearing a long brown robe or cloak, who has awakened her by standing, holding a burning candle, at the foot of her bed while she slept. While it is too soon to make any positive identification of this hooded spectre as a restless lunatic, a murdered monk, St. Amphibalus, the Leavesden gardener, or the Roman who lost his eyes, it is no more than an act of scrupulous scholarship to suggest that it owes its existence to a fiery and vengeful eruption of those aspects of the past which are daily fading around us, and which perhaps resent being cast into oblivion as the swine inhabited by the madness called Legion were caused by God to cast themselves into the sea.

Read More: Arsenal, Manuel Almunia, The Roots That Go Under the Ground, The Unwritten Peter Handke

An Inquiry into the Nature of Ana Almunia’s Ghost