But there’s this: that he plays like the scent of aftershave. It’s the style of something decorative and supplemental that’s passed out of all subtlety and become the noticeable fact about the thing it was meant to decorate: all that tang and sweetness just dolloped and piled and swirled, like too much frosting on a cake.

And there’s this: that there’s a point at which an excess of testosterone seems to open onto a kind of vain and peacock effeminacy, an elaborately mustached, lace-cuffed and rosewater-handkerchiefed assassin’s or bully’s claim of privilege. With his doll’s face, looking in every match like his cat mother has only just licked him clean, and yet at the same time seeming to move in a cloud of pheromones, drunk on himself like a flower, he has the air of a French duelist without a scrap of wit, as though he’d been invented for the express purpose of being killed by Cyrano de Bergerac. 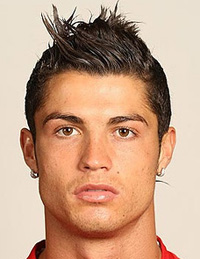 Everything he does is hard and elaborate, and everything he does looks hard and elaborate. His legs piston into the ground; his arms chop the air; his cheeks puff out and collapse; he does a shattering high-kick stepover slalom routine that earns a 9.7 from the Bulgarian judge and leaves his opponent somewhere in a dimly lit passport office, pleading for a different stamp. But it’s so high-octane. It’s reading “The 10 Steps to Finding True Love” in a Maxim magazine. It’s a thudding daintiness.

His most characteristic moment on the pitch is the one just before he takes a free kick, when, standing over the ball with his legs wide, hands splayed and trembling at his sides, he stares furiously at the ground in front of him, as though at any moment we’ll hear a thunderous THOOM!, and he’ll transform into the Incredible Hulk. Then he runs up to obliterate the ball and it spirals prettily into the net.

He’s astonished me, too, of course, at times. He’s effective like fifty megatons. Manchester United have been a joy to watch for two seasons, and he’s no small part of that. You can’t stop him short of lying in the mud and waiting for Ford Prefect. He works extremely hard, I think, and cares all the way down in himself about the result of every match.

Too often for my taste, though, he seems like the movie-preview version of a football player, all cars sliding down a mountain and the Eiffel Tower blowing up. It’s exciting to watch. I’d love to see the movie. I just miss the dialogue so much.