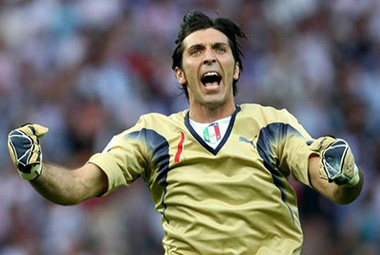 It is not conscious; it is far quicker, much more sure, less fallible, than consciousness. One cannot explain it. A man is walking along without thought or heed;—suddenly he throws himself down on the ground and a storm of fragments flies harmlessly over him;—yet he cannot remember either to have heard the shell coming or to have thought of flinging himself down. But had he not abandoned himself to the impulse he would now be a heap of mangled flesh. It is this other, this second sight in us, that has thrown us to the ground and saved us, without our knowing how.

— Erich Maria Remarque, All Quiet on the Western Front

They say where he walks, the grass never grows.

Because a goalkeeper lives by his reflexes, and because a reflex is an involuntary action—it physically bypasses thought; the sensory neurons trigger the muscle action in the spinal cord, before they can enter the brain and be perceived as a sensation—you could say that the goalkeeper trains himself to shed his own volition, that he perfects himself by making himself less free. His greatest attribute is the literally unthinkable speed of his central nervous system: for most people, a reflex response takes between 150 and 300 milliseconds to begin after the onset of a visual stimulus, but for an elite athlete it can take 100 or less. A ball struck from the edge of the penalty box can reach the back of the net in under a second. Almost imperceptibly tiny differences in the goalkeeper’s reaction time can make all the difference in a match, so the goalkeeper’s best approach is not to think, not to assess, above all not to choose, but to be a kind of primed responder in whom the first white flash over the free-kick wall produces the headlong dive or the slight unconscious twitch that will stop the ball in its flight.

At the same time: who plays with more thought, with more sustained, attentive deliberation, than a goalkeeper? Other players make fluid, momentary choices; the goalkeeper ruminates. He watches and waits, weighs options, shouts orders to the defense, charts angles, decides whether to cut off the near post or block the center of the goalmouth, whether to catch the ball or punch it; he thinks geometrically, looks into the future, is his team’s editor, analyst, tactician and mapmaker at one and the same moment. This is why the goalkeeper is always vaguely a figure of resentment, why “the grass never grows” where he walks: because the crowd hates a philosopher, and the goalkeeper holds himself aloof from the flow of play, looks down on it, plots against it, thwarts it.

This is the paradox of the goalkeeper, the way he plays as a sort of challenge against dualism. He is all mind for fifteen minutes, and then, on the instant, he becomes all body. He is patient and then he explodes. These are the terms, and their embodiment at the present moment is Gianluigi Buffon.

Buffon is a player who epitomizes his position so absolutely that to describe him is to define it, and vice versa. Physically, he’s all nested energy and tensile strength, a smooth bright plane off which objects forcibly rebound; you have the sense that if you touched him on the shoulder you might go flying back. Mentally, he’s composed, accommodating, negative, and slightly mad. He’s shown at every turn in his career that he’s the opposite of shy (the models, the gambling, the controversy) but to watch him on the pitch with the ball at midfield is to see someone so absorbed in what he sees that he’s almost self-negating. There’s a big, soft buffer around him, even when he’s shouting at the defense, in which tranquility and fury seem to be floating very near to one another, but not quite touching, like lights in adjacent windows.

And then it happens that the ball comes near, and he’s thinking, he’s bent at the waist, he’s pointing, he slides to the post. The ball moves from one attacker to another, it suddenly goes screaming toward the goal. And there, suddenly, is Buffon, stretched out in mid-flight, parallel to the ground. And he catches it. The coherence of the attack is ruined, and his private understanding prevails. Only it’s impossible to say whether that’s a reflex or a theory, a plan or a desperate leap, a synapse or an idea.

NOTE: The subject of today’s portrait was selected by Henry, the winner of the Run of Play contest for the best one-line description of Peter Crouch. Congratulations, Henry!