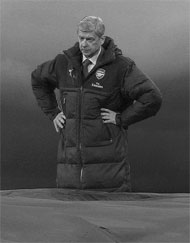 I met a cannoneer with sunken eyes

Who said: Two vast and glassless rims of stone
Stand in north London. In their shadow lies
A battered puffer-jacket, cursed and thrown
Aside, as yet another season flies
Athwart the sun, then melts, then falls, then sags
In baffled error. Cruel were those springs
That tore the hearts from Arsenal’s likely lads.
And on the pedestal these words appear:
“My name is Arsène Wenger, king of kings:
I did not see the incident! Despair!”
Nothing beside remains. Except: Pat Rice,
Still placing training cones in futile squares;
And Gunnersaurus, teeth pulled, chasing mice.

Andrew Thomas edits Twisted Blood and can be found on Twitter here.