The Tragedy of King Ferguson 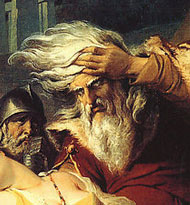 Ferguson is king of Britannia, lord of all he surveys. A firebrand Celt, his armies have marched as far south as Barcino in Hispania and towards the rising sun as far as the banks of the Volga. Old in body and yet nimble of mind, Ferguson seeks the affirmation of his kin, weighing the devotion of his sons in a ceremony at Trafford Castle. Shall a successor be determined?

Attend the lords of Glazer, Gill.

I shall, my lord.

Meantime we shall express our darker purpose. Know that we have divided in half our cabinet on younger strengths while we unburdened crawl toward retirement. Our son of Phelan, and you, our no less loving son of Solskjaer, we have this hour a constant will to publish our sons’ several dowers, that future strife may be prevented now. The clubs Peterborough and Preston – great rivals in our youngest son’s love – long in our court have made their amorous sojourn, and here are to be answered. Tell me, my sons – since now we will divest us both of rule, interest of territory, cares of state – which of you shall we say doth love us most, that we out largest bounty may extend where nature doth with merit challenge? Jason, our eldest born, speak first.

Sir, I love you more than words can wield the matter; dearer than eyesight, space and liberty; beyond what can be valued, rich or rare as a relationship with the Britannia Broadcasting Corporation. No less than life; with grace, health, beauty, (dis)honour; As much as the child e’er loved or father found; a love that makes bargaining poor and abiding by FIFA rules unable. Beyond all manner of so much I love you.

What shall Darren speak? Loan and be silent.

Now our joy, our last and least, to whose young managerial career the vines of Peterborough and milk of Preston have striven to be interessed: what can you say to draw a half more opulent than your brothers? Speak.

Nothing will come of nothing. Speak again.

Unhappy that I am at redundancy, I cannot heave my heart into my mouth. I love your majesty according to my bond, no more no less.

How, how, Darren? Mend your speech a little lest you may mar your fortunes.

You have begot me, bred me, prolifically loaned to me. I return these duties back as are right fit—obey you, love you, and most honour you, but nothing more.

But goes thy job with this?

Let it be so. Thy truth then be thy dower; for by the sacred radiance of the Football League, the mysteries of Preston and the night, by all the operations of the loanees from whom we do exist and cease to be. Here I disclaim all my paternal care, Joshua King, and Ritchie De Laet, and as a stranger to my heart and me hold thee from this for ever. The barbarous Maurice Lindsay, or he that makes his generation messes to gorge his appetite, shall to my bosom be as well neighboured, pitied and relieved as thou, my sometime son.

Peace, Phelan. Come not between the dragon and his wrath. I loved him most, and thought to set my Trafford kingdom on his kind nursery. So be my grave my peace as here I give his father’s heart from him. Call Pulis. Who stirs? Call Allardyce.

Hero of ‘That night in Barcino’.

The Tragedy of King Ferguson