The Mutual Sufferance of Don Revie and Betty Draper

“Anger repressed can poison a relationship as surely as the cruelest words.” —Dr. Joyce Brothers

Such is the reluctance of society’s subjection to the temporality of nature, there will always be a string of institutions and, as a result, individuals, who lag behind, cast asunder in its wake. Stranded on an island of kitsch and creeping nostalgia, they cling to the façade of the past and subconsciously cultivate an acute resentment towards the abolition of the old order which they report to hold so dear. We see it acted out in the politics of the right, we’ve heard it in the aching music of myriad mock-eighties synth bands and, in AMC’s wonderful drama Mad Men, it is encapsulated in the paradoxical character of Betty Draper.

Betty, for the benefit of those not yet intoxicated by the televisual beauty of Mad Men, is the leading lady of the series, a stunningly insecure Grace Kelly replica and the wife (now former wife) of the programme’s enigmatic antihero, Don Draper. A woman who does her utmost to appear decent and respectable despite a raging cloud of inner turmoil, Betty’s frustrations are etched into her body language and yet are very rarely voiced or made clearer than is absolutely necessary.

Married to a man who, depending on your point of view, is either progressively liberal or morally bankrupt in his social attitudes, Betty’s somewhat naïve attempts to maintain a visage, no matter how weak, of traditional ethical values within her family unit result in her psychology becoming warped by a self-imposed and increasingly tentative 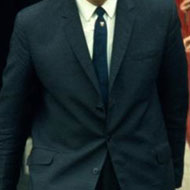 social elegance. Mrs Draper, constantly ill-at-ease with the lifestyle she suspects her husband of living away from the marital home, is, in essence, a victim of the loosening moral bonds of the fifties and sixties. Silently enraged by the absence of respect her husband has for the cultural customs—at least the ostensibly public ones—of the previous generation, and personally stifled by her own dutiful adherence to those same customs, she finds herself a redundant social figure sliding towards a crisis which at times borders on the existential.

“I’m pretty sure Dr Wayne tried to look down my neckline the other day. He sits behind me and, as far as I’m concerned, as long as men look at me that way I’m earning my keep. Then, every once in a while, I think ‘No, this is something else, I don’t want my husband to see this.’” —Betty Draper

In “Red in the Face” (S1:E7), Don calls Betty’s psychologist, Dr Wayne, in a gross breach of confidence as he attempts to discover what she has been disclosing to him. The symptoms she is showing, it becomes clear, are those of a woman locked into a cycle of banality and, perhaps, irate at the complete lack of influence she is able to exert over the changing nature of society. “Mostly she seems consumed with petty jealousies and overwhelmed with everyday activities” we are told. “This kind of anxiety is not uncommon in housewives”. As Ariel Levy and Gail Collins have written, amidst a society of unevenly distributed feminism and rising divorce rates, many women of the time felt less safe about their futures and, resultantly, were filled with complex and choleric feelings towards the position in which they found themselves.

So how, you may ask, can any meaningful parallels be drawn between Betty Draper and the former Leeds United and England manager Don Revie? Revie can be said to have suffered from the same personal and civic disillusionment that we see illustrated in the character of Betty on a weekly basis.

Like Betty, Revie was, in principle if not always in practice, a figure of tradition and conservatism. In his case it was the ‘traditions’ of the English game to which he nominally subscribed. He was a man who did not question authority within the sport and generally sought to uphold the institutional status quo. However, again like Mrs Draper, Revie found his world view challenged and strangled by those closest to him, albeit in a professional rather than a personal context. The primary catalyst behind that quasi-ideological challenge was, of course, Brian Howard Clough.

Clough, an anti-authoritarian figure who wasn’t afraid to parade his own impassioned self-love or publicly deride the achievements of others, was not like the other managers of the time. A man who paid little respect to decision-making bodies such as the Football Association or, indeed, propriety in general, he offended Revie’s sensibilities and made the Leeds coach seethe in a way which began to strip away his moral edifice. Clough was to (Don) Revie what Don (Draper) is to Betty, a character so opposed in personality that he served to induce in the other a feeling of social humiliation, a form of intense suppression that ultimately led to a spate of abnormal behaviours. 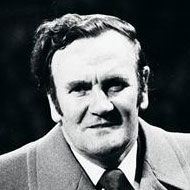 Both Revie and Betty have these deviant moments, although the way in which they manifest themselves could hardly be more different. Mrs Draper, struggling against the aggressive form of sufferance that encloses her, attempts to break up the linear, mundane pattern of her domestic life through an act of soft violence in “Shoot” (S1:E9). Riled by a neighbourly dispute and filled with a revolutionary zeal that sits awkwardly with her apparently genteel disposition, Betty takes the family gun and begins to fire at her neighbour’s pigeons as they circle overhead. Shotgun in hand and cigarette drooping irresistibly from her mouth in a style befitting Bonnie Parker, she voraciously enjoys the fleeting power this act outside of the usual social boundaries affords her. Then, as it was before and seems destined to forever be, she returns to stunted domestic servitude, her latent

anger dissipated only for a few short moments.

Revie, on the other hand, brought his simmering incandescence to the boil in the humble surrounds of a Yorkshire television studio in 1974. Seated next to Clough, who had just been unceremoniously sacked as Leeds manager, undoing much of the work Revie had done before, anger was etched across the features of the then England manager who struggled—and ultimately failed—to keep his emotion in check.

Patronising, perhaps deliberately, and scratching at the air with his distinctive north eastern drawl, Clough is tempting Revie into a reaction, tempting him to ditch the cloak of seemliness and engage in confrontation. The reaction that resulted may not have been the cascading furnace of rage the voyeuristic amongst us would wish for, but anger screamed through the England manager’s body, tension visible in his every pore as he strained to retain a semblance of decency. The joint interview, looking at it through a sociological lens, was a beguiling set-piece between the old and the new, an experiment to test the limits of decorum and a visible manifestation of the resentment Revie felt towards a man who was, in his view, deliberately attempting to undermine all that he purported to stand for.

However, and this is essentially the anagnorisis of this essay, the ideas of propriety that both Betty and Revie held are/were patent fallacies. While both characters superficially attempt to generate an image of learned moral sophistication, beneath the surface they are just as engaged with the same framework of moral corruption as the men for whom they harbour such burdensome semi-secret disdain.

Don Revie’s hypocrisy (if you should choose to interpret it in that way) was plain to see through the football his Leeds team played as well as some of the accusations that were levelled at him later in his managerial career. Leeds under his stewardship were one of the most physical teams the English game has ever seen, battering opposing sides into submission without a semblance of subtlety or much in the way of a regard for the rules of the game or the health of their opponents. Revie may have done his best to present himself as a self-made gentleman and a man of great principle, someone who was “too good” to be dragged into Clough’s slanging matches, but he was also the architect of one of the most uncompromising styles of footballing gamesmanship that has ever been seen. He was also accused of far darker acts; the cover-up of Gary Sprake’s drink-driving incident in 1971 was attributed to him, and there were rumours that he regularly attempted to bribe opposition managers throughout his time at Elland Road. Don Revie’s complex personality was not without hamartia.

We see the same flawed reality in Betty Draper. Privately disgusted at her husband’s deceit and deeply melancholic, she does not appear to recognise the blatant irony in her own actions. Her complex extra-marital affair with Henry Francis and the almost schizophrenic manner in which she regards Don completely undermine her outward moral standpoint. Betty, despite a longing for the supposed faceless innocence of the past, is just as afflicted by the secularisation of modern morality as her husband, something she cannot bring herself to accept.

Ultimately, despite arguably possessing a more complete moral compass than their opposing figures, Betty and Revie are difficult characters to ‘like’. The perceived contradictions at the very heart of their personalities as well as their catastrophically repressed emotions give them both a stilted manner, one with which is almost impossible to sympathise. Whereas Clough and Don (Draper) act as they choose and don’t apologise for it (although Don does experience occasionally profound bouts of guilt, and Clough was periodically tormented by self-doubt), the way in which Betty and Revie contrive to hide their own faults behind a mutual veil of sufferance is deeply unattractive.

So, despite being of a more romantic disposition, the two stilted traditionalists become somehow devoid of romance altogether, loathsome and unappealing in comparison to the polished pair of charlatans for whom they hold a silent hatred. They contortedly believe that they are upholding the values of a more honourable age, but they are not—they have been washed away in a tide of profligacy just like the rest of us.

The Mutual Sufferance of Don Revie and Betty Draper