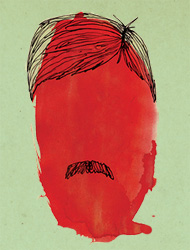 Last week’s Match of the Day 2 closed with a montage of scenes of sickening violence involving Joey Barton during Newcastle’s draw at Molineux. The novelty is that Barton featured as the victim of assorted crunching, scything and slamming, as Wolves’ enforcers targeted him on seven separate occasions.

It’s not a natural role for him. The previous week Newcastle swaggered to a 6-0 victory over Aston Villa—a remarkable result for anyone, let alone a newly-promoted side fielding essentially last year’s team. Somehow, though, the game turned itself into a storm of headlines about Barton, aghast that, after scoring with a terrific long shot, he appeared to celebrate before the home fans with a Hitler salute. It had to be Barton—no characterisation of hat-trick hero Andy Carroll, a bit of a rascal himself, as Atilla revelling with his barbarian hordes.

However, against Wolves Barton’s conduct was irreproachable. He took his treatment stoically, even trying to shake off his injuries rather than playing up for the referee. His only action was to remonstrate at the end with Wolves’ manager Mick McCarthy, who appears not to have taken the complaint entirely seriously: “Talk about the pot calling the kettle black. We were laughing about it.”

Wolves, then, were clearly operating to a plan. Going by the record of those involved, the likely idea was to provoke Barton into retaliation and a red card. He’s a fine player, neat on the ball and excellent at finding space, and Wolves’ task would have been easier in his absence.

But this year’s Joey Barton appears as a changed man. His public persona at the moment emerges from a series of interviews condemning first himself and his history (“If anything I rightly deserve every bit of criticism that was levelled at me. I can’t stand here and try to defend myself because I am indefensible”), and then the members of his profession (“Most footballers are knobs. I meet a lot of them and they are so detached from real life it’s untrue”)—before turning back on himself (“But there was a stage when I was like that”). In that profession’s context, and without digging too deeply, this year’s model comes across as moral, intelligent, and even fairly likable. There’s a rationality to him, and an acceptance that his old attitude and his temper have to be smothered.

However, and unexpectedly, Wolves may have exposed a quite different weakness. Although not exactly hobbled by their approach, Barton could hardly play his normal, effective game when being clobbered at every opportunity. Which Wolves got away with, partly thanks to Barton’s maturity in not exaggerating his treatment.

Even the root of the unfortunate Hitler parallel—his quite splendid moustache—could be seen as a sign of Barton’s maturity and of its corresponding weakness. Eschewing facial hair as peacocking or intimidation, the look brought to mind such unmanly types as Peter Mandelson and Midge Ure—for whom the moustache stood for sophistication.

Barton, in short, may be turning himself into someone who appears averse to a bit of rough-and-tumble: in football terms, a player who can be ‘got at’.

Interestingly, his manager Chris Hughton seems instinctively to understand the knife-edge that Barton has worked himself onto. “It’s part and parcel of the game. If you are a professional footballer you take some and you give out some.” Far from condemning rough treatment—as might Arsène Wenger, whose own players are incapable of ‘looking after themselves’—Hughton comes close to a plea for the return of the old Joey Barton. He effectively condones the tactics that kept his man down, recognising that Newcastle may need them themselves in the not-too-distant future.

Logically, you get the feeling we should condemn this. In practice, of course, nobody paid any heed to what Hughton said. Instead the condemnation of Wenger rumbles back into view, now for his continued vendetta against Stoke’s Ryan Shawcross, who hasn’t been near his side for months. Wenger could no doubt give you a dozen reasons in support of his view—but Hughton understands why here, reason is wrong.

You see the point. Hughton is trying to play the game, Wenger is trying to change it. In game theory, where your outcome depends on coping with an opponent as well as circumstances, reason can be more a hindrance than a help. If your opponent knows your route to success, he can wait to ambush you with a crunching challenge.

The law reflects this. While the government acts as a provider of services to you, the individual, it has to do so fairly and rationally. But in international relations, where it competes against foreign powers, it can mostly act as irrationally as it likes and the law will not intervene.

Indeed, there are actually benefits to being irrational. When North Korea is in difficulties, it postures like crazy, and because the world can’t be sure that it isn’t crazy, the world backs off. No one fears the Swedes.

Sometimes governments attempt to introduce reason, but it doesn’t always pan out as expected. West Berlin introduced a set of asylum criteria in the seventies to attract East German refugees—a laudable attempt to use one reponse to Hitler’s atrocities in order to deal with a problem of their aftermath—only to soon find itself with thousands of unexpected Pakistani migrants squeezing themselves into the framework.

But back to the point—there are yet signs of hope for Joey Barton. The bullying performance against Villa was also notable for a high, late challenge by him early on, against Stilian Petrov, for which he was lucky not to see red.

It was a glimpse of a man not entirely in control of his own nature. This quality, staying on the right side of the line as much by luck as by judgment, almost as much as his neat passing and conventional attacking threat, makes Barton a potent presence for any team.

I had hope then, and such high hopes for the moustache. Its fantastic terribleness seemed not so much a rejection of machismo, but an utter disdain for what others might think. The sort of thing Roy Keane might’ve gone for, if he’d had the balls.

Alas, the razor’s edge let me down. It was all a prank, a way of team bonding until Newcastle scored their first victory. That achieved, he couldn’t shave it off fast enough. At least he looked more like his old self again.