There and Back Again 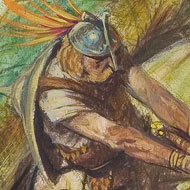 As the last flashbulbs fizzed in the stands and the last shots of Bono slithered across the world’s TV screens, gold confetti swirled, Sepp Blatter purred, and the Spanish players posed around the trophy. But a continent away, there was another team with something to celebrate. Tiny, unheralded New Zealand, one of the pre-tournament favorites for the title of worst side in the field, dumped out of the group stage after fighting for three gritty draws, finished as the World Cup’s only unbeaten team. Let there be dancing in Auckland and drinking in Hobbiton. For the last shall be first, I’m tempted to say—although as far as the Spain-Netherlands game is concerned, thankfully the last was just last.

There and Back Again