“I’m lucky that I have such quality players in my squad. The success that we’ve had has been down to them and I’d like to thank them for that.” —Guardiola

“Even Jesus Christ wasn’t liked by everybody, what hope is there for me.” —Mourinho

Mourinho’s act with the media has always felt less like tactical posturing—the sort of thing Bill Parcells always used to get credit for, or that Rafa Benítez believes himself to be good at—than like the simple luxuriating of a man who likes sunning his ego in public. If there are two smart ways to deal with the media—be boring and say all the right things, or else stir up controversy for some deliberate purpose—Mourinho loves balancing on the precipice of Crazy Option #3, letting them know what you really think. That’s not to say he falls over it, or that he treats a press conference like group therapy. What comes out of his mouth is always too slippery and reversible to be taken as plain country honesty. He loves teasing the moment, treating a mildly shocking, probably at least somewhat sincere, assertion like the most obvious public fact in the world, then daring you to guess exactly how ironic he’s being. But he gives the impression of doing it for the pleasure of the thing rather than to deflect attention from his players or to get in anyone’s head. Even when he’s obviously playing mind games or calling someone out, the background is always I can get away with whatever I want rather than I am willing to blow myself up to get Story X in the papers. When there are good consequences, it’s fortuitous. When there are bad consequences, that’s part of the point; he’s showing you he can do this with one hand tied behind his back.

It’s easy to hate him for that, and if you do hate him for that, you probably love the formal exercises in post-match humility that Pep Guardiola sustains every week after the Barça match. Actually, even if you applaud Mourinho for bringing a spark of live intelligence to a forum dominated by dead-eyed bloviators and tedious androids, you probably still admire Guardiola’s classy discretion. Blaming yourself after a loss and praising your players after a win is supposed to be the template, but Guardiola takes it to a level of offhand refinement that’s probably unique in sports. It’s entirely in keeping with the “say boring, approved responses” school, but rather than reading from a script, he somehow makes you believe he’s offering up the fruits of intensive, self-effacing reflection. It’s not that he’s learned the cynical rules of dealing with the press, it’s that his mind is actually consonant with the virtuous sentiments that cynical people mimic to keep the press off their backs. If Mourinho offers completely original responses in a way that suggests elaborate improvisation and contrivance, Guardiola offers canned responses in a way that serenely suggests something like lasting truth.

It isn’t just in press conferences. The contrast between 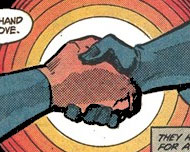 these two managers is so deep and abiding that I think we’ve been slow to recognize it, almost as if it requires a leap of imagination to recognize that they exist in the same world at the same time. At first, after the Champions League draw, everyone concentrated on “Mourinho vs. Barcelona” (which makes sense, because they were both media sensations, while Inter was somewhat under the radar and Guardiola was a null presence, like a saint). But at some point, maybe during the first leg, when it became clear that Inter had a real chance to win, Guardiola shimmered into view, in the same way that Galahad might if you’d realized he was fallible. The manager who had in many ways never been seriously challenged since he took up the sword and cross was suddenly in a fight, and—wonder of wonders—with an antagonist who represented his utter and irrevocable opposite.

There’s the tactical difference, which was the first thing people talked about: Mourinho cautious but powerful, Guardiola like the flowering eglantine. There’s the amazing historical background: both men had ties to Barcelona, but Guardiola’s was as a beloved captain and Mourinho’s was as a glorified interpreter; Guardiola was a star player, Mourinho never played at all; Guardiola was a lifelong insider and company man, Mourinho was a self-made mercenary and outsider. There’s the even more amazing archetypal conflict: you could write ten blog posts and a French revenge tragedy about the aging enfant terrible vs. the pristine golden boy. A powdered woman would smile behind a fan, honor would be insulted, and they would duel to determine the disposition of the author toward existence. Eto’o would be the Marquis de H_____ and Iniesta would be a pistol.

Look at them on the touchline. They’re both slim and well-dressed, but in Mourinho this seems to be a function of vanity (he wants to look good, he wants to drape himself with expensive fabrics) while in Guardiola it seems to be a function of a kind of spiritual sublimation in the community (he doesn’t like to take up unnecessary room or to draw the wrong kind of attention to himself). Mourinho is tense and agile, sighing through his cheeks and jumping to his feet, but in a way that I’ve always thought disguised a surprising calm, as if he knew exactly how he needed to react to keep stress from interfering with his calculations. Guardiola is relatively impassive, standing straight with his arms crossed or leaning back with his long, skinny legs straight out, but again in a way that I’ve always thought was surprisingly nervous, as though he were thinking, no negative energy, remember the greater good. When they talk to their players, Mourinho is often looser than you’d expect and Guardiola is often more avid.

But that implies that they blend into each other, when I’ve just said that they barely exist in the same reality. Well, there are borders between countries that are simply imaginary lines drawn on continuous terrain, the people on either side of which speak different languages and have completely different customs. Maybe that’s making too much of a temperamental difference between two managers. But then it’s also worth noting that those are the countries that tend to go to war.

What’s happening with Pellegrini next year, anyway? This could get important very fast…