Pulling Back the Curtain on the Wizard of Real Madrid 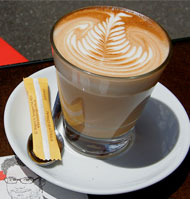 Every time I write on this subject, self-doubt creeps in. Barcelona’s possession game has seeped into the soccer inteligentista social network, forever altering its philosophical foundations and how we view the “beautiful” game. Every time a defender passes to a goalie, we don’t roar with cheers, but rather applaud quietly in a Starbucks while sipping on a latte and flipping through the Guardian. And if the goalie passes to a defender? We stand up abruptly and spill that latte all over our designer jeans, but catch ourselves before beating our own chests. We are civilization, we tell ourselves. Xavi would never dream of doing such a thing, we whisper in our own ear.

Yet when I look at Real Madrid, the doubt of the writer creeps in. I wonder—am I merely imposing linguistic order on a chaotic universe? At some point, “dark matter” and “black hole” are just technical terms for “fucked-up shit.” The last time I grappled with this subject, I grasped for Aristotelian examples of warfare. Now I turn to a more nefarious extended metaphor: college basketball in the United States.

A caveat—I am a Kansas University fan, born and raised. Thus, I have seen the two contrasting offensive trappings of Roy “Judas Brutus” Williams and Bill “Hillbilly” Self.

To your surprise, I side with the man who scarred so many of us so long ago, Mr. Williams. Roy’s offensive game plan was simple—push the tempo, run quick offensive sets if possible, and try to capitalize on turnovers. The result was high scoring games, although Roy never won a championship at Kansas. Mr. Self, on the other hand, prefers the half-court style. The offense goes through a series of set plays, trying to set screens, play high-low give and go, or capitalize on backdoor cuts. Kansas did win a national championship under Self, but the 70-point scorelines leave fans restless for the triple-digit Williams era. At least me.

In these two contrasts—the half-court and the fast-break offense—I place Barcelona into Box H and Real Madrid in Box F. Barcelona is a crossword puzzle: you patiently peruse the questions and tips, constructing your answers word by word. Real Madrid is Sudoku on meth: sometimes you fill an entire box or line in minutes, other times you glare at a blank page. You can’t predict where or when the Madrid attack will materialize because the tempo is the key, not the specific decision. Madrid is a series of staccatos where the notes don’t matter, as opposed to a lush Catalan crescendo.

Both offenses present problems, mind you. The Messi dribble/Xavi chip/split pass had its share of struggles last year when Essien sat on the Spaniard and Ashley Cole stuck to Messi like glue. With the Chelsea back line forming a catenaccio bunker, Leo faced the daunting task of dribbling into an army while Xavi had no offside trap to spring; he would make his ceremonial pause, lift his head, and see the Blues’ back line huddling around their own goalmouth. Only a wonderful Iniesta strike after a defensive gaffe assured Barcelona’s progression. Can you imagine a more narrow victory?

As for Madrid, the fast-break offense runs on a fuel of confidence and athleticism. Pellegrini regularly uses all three substitutions in a game—unlike Rafa Benítez’s, his rotations are not some cerebral exercise in planning. No, they are necessary, because no human being can press for 90 minutes a game, two games a week, and not suffer a physical breakdown. The Sevilla

comeback exemplified both concepts. Despite going down by two goals, Madrid mounted a historic fightback fueled by pressure and, well, more pressure. Like ravenous sharks, the scent of the first goal entered their nostrils and then things got nasty.

While many pundits want to paint the second Galactico era as a shoddy sequel, the remarks of Pellegrini and the play of the merengues suggest otherwise. This past summer, I feared that Manuel would try to impose his Villarreal short-passing ethos on this Madrid side. Instead, Manuel has favored a fast-break offense and a full-court press. Like Barcelona, Madrid likes to press deep with three players to disrupt the opposition’s buildup play. However, unlike Barcelona, Madrid does not patiently construct their attacks after winning the ball. While the fullbacks overlap, passes backwards do not populate the game stats. Rather, as in the glory days of the pre-Shaq Phoenix Suns, the offense favors split-second decisions over methodical calculation.

Of course, the inherent tension of that last sentence merely highlights my dilemma in articulating this ethos. But that difficulty comes from the accepted Barcelona baseline of “pass-decide, pass-decide” football. Only you can decide if I’m defending a fast-break, full-court offense, or painting nihilism in technical terms more flattering than “fucked-up shit.”

I’ve already made up my mind.

Elliott is an American soccer blogger who follows the beautiful game around the world. He writes regularly for Futfanatico.com.

Pulling Back the Curtain on the Wizard of Real Madrid