A Portrait of the Arsenalist as a Young Man

Both [Robin van Persie’s parents] are artists. José Ras, his mother, is a painter and jewellery designer who also teaches children with special needs. Bob, his father, is a sculptor who specialises in using discarded newspapers and other waste materials to construct football crowd scenes and has just completed a special commission — a giant frieze for his son’s new house in Enfield.

After his parents divorced it was Bob he lived with, growing up in an artist’s den. “When I was younger my parents encouraged me to be creative, to draw and play games to expand my mind. They wanted me to be an individual. But it turned out I’m rubbish with my hands.”

I went down to see young Robin’s art class today. Had to get away from ’er indoors; she was having another one of her happenings: feminist reclamation of craft, and all that gubbins. Anyway I get down to see Robin and let me tell you, he doesn’t take after his old man! He was really floundering out there, I mean, it’s hard for me to admit this but the boy just isn’t cut out for a life in art.

Today’s lesson was life drawing. Well, this beautiful French girl disrobes early doors and we’re set for a great performance. Lovely surface, would be a dream to play on. All the other boys, they are getting stuck in, swishing paintbrushes about like nobody’s business. But Robin’s just on the periphery!

When it comes to half-time in the class, I take Robin aside to give him a bit of advice. “You’ve got to work on getting to the line Robin, and whipping one in from there. I should think the wonderful rhythmical flow of lines and curves could be more subtly felt than seen.” 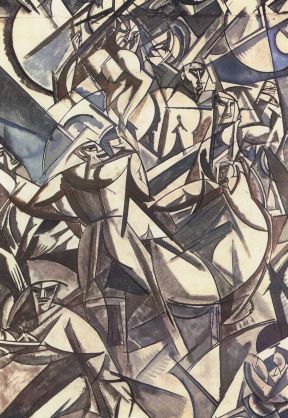 He nodded, almost as if he understood. Sure, he got a bit more into it in the second half, but he just couldn’t apply the killer stroke and finish. I sometimes wonder if he’s…y’know – different to the other boys? A few pigments short of a palette, if you catch my drift.

Went to watch Robin working on his skills again today. He was working on sculpture – a boy after my own heart! While it was certainly technically proficient, it was undeniably flimsy and one of the more boisterous Northern Rotterdam boys – the ringleader of a group of constructivists – came over, and kicked his fragile maquette into dust. He struggled to pull it together again, as it kept crumbling away and Robin just broke down. The boy looked up at me, tears streaming down his face, and I gently reminded him that every act of creation is first of all an act of destruction.

Robin confessed tonight that he is turning is back on art to be a footballer. I have never been so ashamed; you hear about these types, even see them in the street, but you never expect that your own child will turn out like that.

I had gone upstairs after dinner to check how he was getting on with his performance piece, but I came in to find him in a full football kit. I knew that this wasn’t part of the piece as he tried to run behind the wardrobe, but I could hear his studs clattering across the floor. Realising it was fruitless to run, he stopped and deftly turned to me with a new resolution on his face, and spoke eloquently:

“I believe that anything in life, if it is really well done, becomes art.”

I felt proud. Yet still…still, I worry about him. Me and the wife, we are artists; ‘ardest game in the world, mate. When we present our works to people, there are no cheering fat oafs, no common applause: the sound of meat on meat. We are used to quiet contemplation, the silence only broken by a raised eyebrow – sometimes two! – or a polite murmur of higher understanding. I only hope that my Robin can find somewhere where they can respect him in the same way.

Nick Dunmore is among the titans at the colossal Fisted Away.

A Portrait of the Arsenalist as a Young Man