My assistant manager quit. I have no idea why. He just stood there in the doorway, gingerly holding his resignation letter, muttering something about becoming the coach of Sorrento.

“Why, Roberto Colapietro!” I exclaimed, using his real name for emphasis. “You’re going to be a manager, and you didn’t tell me? Congratulations! Don’t act so sheepish about it; only a nonentity would want to spend his entire life as an underling.”

“No, no, you misunderstand me, signore,” Roberto hemmed. “I’m going to be a coach at Sorrento. One of six, beneath the manager. That is…a trainer.”

I wrinkled my nose, simultaneously like and unlike Meg Ryan in one of her romantic comedies. “You’re leaving a job as the assistant manager of the best team in the world in order to take a worse job at a mid-table Serie C1/B club? Why would you do that? What are you thinking?”

But he just shifted his weight from foot to foot and didn’t say anything.

“Are you unhappy here? Are we not paying you enough? We could talk about a new contract, Roberto. You’re a valued part of the team, kind of.”

He looked at me with his big, sad eyes and said no, it wasn’t about the money, in fact he was taking an enormous pay cut.

I looked up Sorrento in the database and saw that they’d recently been bought by a Taiwanese conglomerate. I gave Roberto a concerned look and asked him if Chairman Fu Yuming had something on him—“because there are steps, Roberto; we have resources here, you know.” But Roberto clearly wasn’t going to explain, no matter what I said.

So, for the moment, I’m blundering through without an ass. man. (hee). That’s less of a problem than you might think; I’ve never had one whose tactical advice was worth the ambiguous gray substance it was printed on, I ritually ignore their thoughts on transfers, and I schedule my own friendlies. Where they’re useful is in keeping me attuned to the mood in the locker room: telling me which players are angry about their playing time, which players are feeling the pressure, which players are looking complacent, etc. That’s something I’ll have to make do without for the time being. I have an ad in the Italian Football Post; hopefully some good candidates will wash up on the Naming Rights doorstep soon.

Incidentally, and this has nothing to do with anything, but while I was doing a quick assistant manager search on my own, I noticed that Vito Scialpi, the manager of A.C. Milan, is paid €450,000 per week. That’s almost eight times what I’m making (€58,000/week) and almost two and a half times as much as the highest-paid player in the world (Barcelona’s Sergio, €186,000/week). Hope those zero trophies you’ve won since 2018 are helping you enjoy the fruits of your success, Vito.

Transfers. There was arguably no need to tear up a team that had won the UEFA Super Cup, the Club World Cup, the Coppa Italia, Serie A, and the Champions League the season before (sorry, I’m just listing these to irk Vito), but I still had a couple of priorities, namely bringing in a left back to cover for Michael Dogan and buying a striker to replace Teixeira. Oh, right, and selling Teixeira. Why did I decide to sell Teixeira?

Because the kid was 22 and in the full-blown midst of losing it. His abilities were declining, his production had fallen off more sharply than the quality of Gaius Baltar subplots on Battlestar Galactica (nosebleed-inducingly, that is; face-meltingly), and his diva-ish/temperamental/”thoroughbred” personality had meant that he was hated by roughly half the players on the team. He’d given us two otherworldly seasons (22 goals in 39 starts in 2017-18,  18 goals in 29 starts the next year), but last year could only manage five goals in 29 appearances. Maybe it was just a fluke, and if I sold him now (now, while he was still worth something) I’d regret it. But that wasn’t the way I was gambling.

Still, I hedged my bets. Instead of taking €35 million up front from A.C. Milan (who, remember, had offered me €60 million for him two seasons ago), I sent him to Atlético Madrid for €30 million spread out over two years. This way, if he does recapture the glory months of his late teens, I won’t have to watch it in Serie A every week.

To replace Teixeira, I wanted value for money: a guy who could be an effective backup for Dmitry Kozlov, but not someone who was going to cost crazy bailout/Ponzi-scheme money (you know, Vito Scialpi money). I settled on Andreas Andersson, Barcelona’s overlooked Swedish international. He’s 29, zippy, and flairful, and he’s played well everywhere he’s been given a chance. I wish he had a left foot, but he only cost €7.75 million. At this level, that’s practically free.

(Compare with Teixeira at four times the price:

Yes, this means both of our strikers are F.C. Barcelona castoffs. But at this point, I’m just trying to keep the seat warm until our young stars (Michele Proietti, Luca Leone, et. al.—yes, we have a promising 18-year-old named Leone, as if destiny didn’t already have a sense of humor) are ready to take over. And I think we owe Barcelona the commerce after the bath they took on the Antônio purchase back in 2019.

So you’re a famous old football club from Piedmont, newly resurgent, rich as a lord, and in the market for a backup left back. What do you do? You play it cool and look for a solid bargain, right, a player who’ll contribute meaningful minutes (“contribute” being the kind of language you’ll invoke to describe his, er, contribution) but not require lethal icebergs of cash (you know, Vito Scialpi money). Right? Well, I was sitting on a transfer budget of I think €98 million, and I went the opposite direction.

Basically, I kept getting my head turned. I upsold myself. If I’m paying €11 million for decent, why not pay €17 million for good? And if I’m already paying €17 million, why not let the salesman with the astonishing pompadour tack on the thermal undercoating and Venutian GPS (you never know, he says) while we’re at it? In the end I was apprised of the plight of one Tim Hauk, a German international and best-left-back-on-earth candidate, who had recently accepted a €30 million transfer to Manchester United after which they immediately and inscrutably switched to a 3-5-2 with a flat midfield and no fullbacks. Languishing in a formation that had no use for him, this astoundingly talented 24-year-old was desperate to escape and available for the not-exactly-discount-but-not-exactly-not price of €29 million. I took it.

It’s going to require some rewiring. He’s clearly too talented to sit on the bench, but it’s also not just a matter of making him the starter and Dogan the backup; Dogan has to start as near to every game as possible, because when Dogan isn’t out there working his captainy magicks we tend to play like a sponge that’s wet in the middle (and I don’t even know what that means). Fortunately, Dogan is versatile and tends to play well even in positions for which he’s nominally unsuited, so the plan is to rotate him around the park depending on who needs rest, while letting Hauk take the bulk of games at left back.

One other purchase to report: Erdem Ak, a Turkish teenager for whom I parted with €8 million because he’s two-footed, promising, and nifty for his age:

The preseason with this group was a mixed bag. We took a gentlemanly second in the Silvio Piola Cup, beating Barcelona in a 4-3 thriller in the first round before succumbing 0-1 to Man Utd in the final. Then we played the Supercoppa Italiana, where Roma utterly obliterated all facets of our game and won 4-0 (a bad omen?). Then we won the UEFA Super Cup (third year running) against Sporting, in an insane game that went to penalties, then went 14 penalties deep before we won it 9-8 (both goalkeepers scored, Paolo Martini scored the winner). 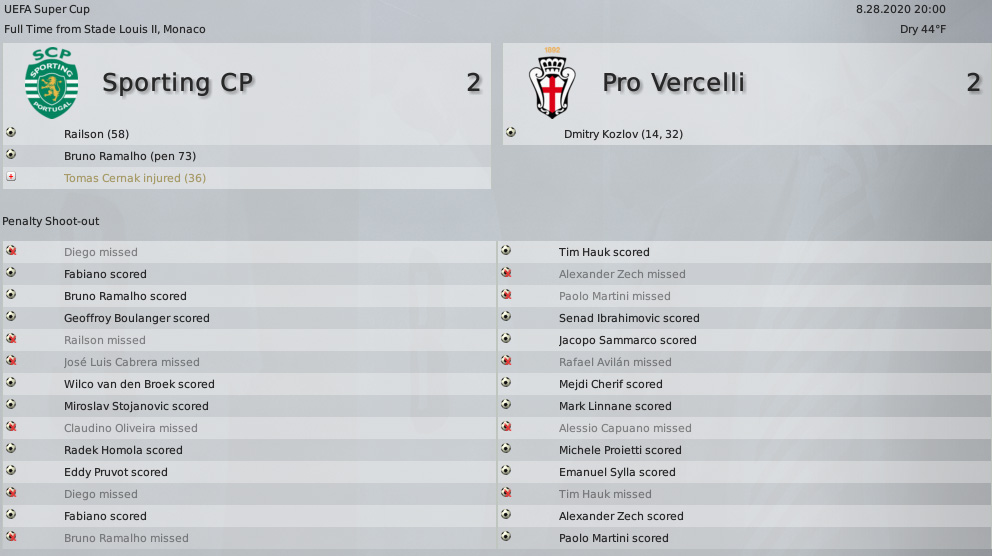 We start the season against Parma and Salernitana before playing Milan at the San Siro in the third game of the year. We’re rested and ready to go, and the team’s sanguine of mind now that Teixeira’s ego is no longer perched like a tarantula on the locker room wall.

But can we play without the striker I genuinely believed would be a 15-year talisman for the club? Can we stay motivated after running the table in every conceivable way last season? Can we cope with the transition as some of our established over-30 stars (Ibrahimovic, I am looking in your direction) start to make way for the players who will one day replace them (I am whistling your tune, Riccardo Caprioli)? Can I continue to drink coffee at a biologically sustainable pace without an assistant manager to fetch it for me? Stay tuned.