– The U.S. upset of Spain in the semifinal delighted everybody in South Africa. In addition to giving Bafana Bafana hope of an equally improbable victory against Brazil, the win by the U.S. erased the sour taste left by the previous crowd favorite, Egypt.

The game was in Bloemfontein, on a bitterly cold night, and it started off slow. People were late in arriving to the gate, and expectations for the game were minimal. As everyone trudged to their seats, the mood seemed to convey a feeling of inevitability—how could Spain not win this game? At kickoff the stadium was only just over half full, with one contingent of fans making a bit of noise behind one of the goals.

However, as it became clear the onlookers were potentially going to witness a big upset, the atmosphere lightened and the fans in Free State Stadium found their voice. By halftime, the mostly-full stadium now had a good amount of singing and dancing. In the end it was the first venue I had been to where the sounds of fans’ voices were louder than the vuvuzelas (see 40 seconds into this video).

– The reaction in South Africa was one of amazement. While praising the U.S. for their excellent performance, Spain’s loss, more than anything, galvanized the entire country for the next night, when Bafana Bafana was set to take on Brazil from Ellis Park.

– The second semifinal was tense, and it was as close to a World Cup atmosphere as any of the games in the tournament. Bafana were going to try to do the impossible and upset Brazil. The magnitude of the task in front of Joel Santana’s team rippled throughout the crowd.

In contrast to the game in Bloemfontein, the semifinal at Ellis Park drew all sorts of people to the ground. I arrived and was promptly ushered out of the way to make room for incoming motorcades of South African politicians, international figures from around the soccer world, and Jacob Zuma himself.

Security at the previous venues felt unimportant, as if it were tacked on to the experience as a formality. But here, the security at Ellis Park demanded that you take notice. I had my ticket and pass checked about five times as I made my way to the seat. In the end I’m sure the increase in security corps was solely for the purpose of people saying, “See, everything is safe here.” After kickoff, it became just as easy to sneak around the ground as at any other match, and as with the other stadiums, the places you could and couldn’t be sort of got blurred. 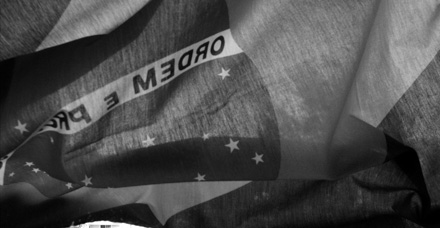 I took my seat close to the pitch and settled in for the game. The Bafana faithful seemed determined to lift their team against the much superior Brazilian opposition, and in the first half South Africa gave Dunga’s star-studded cast as good as they got. Scoreless at the break, the fans started to kind of want to maybe believe their team could pull it off. 45 minutes to go.

Ellis Park is a proper stadium, and it should make for a great atmosphere during the World Cup. It’s big enough that you really sense the largeness of the crowd—over 50,000 when sold out—but not so vast that the fans seem removed from proceedings. I had last been there in 2007, and since that time the stadium has undergone some pretty significant renovations. The interior of the stadium (locker rooms, VIP area, etc.) has been gutted and redone, while the added upper tier adds some significant size to the ground. One drawback—once you take your seat, getting away from the field is a nightmare. Don’t expect to go anywhere at halftime, or even walk around the stadium with any kind of ease.

In the second half, Brazil began to gain the upper hand (how many times has that statement been written in history). I had to leave early, but even midway through the second half Bafana Bafana already seemed to be locked in a race against time. In the end I heard the final minutes of the game on the radio, where the the announcer called Daniel Alves’ goal with grim inevitability. As the final whistle blew, however, he was defiant in the face of the loss: “People will remember this game,” he bellowed, summoning up his last emotions from the draining 90 minutes, “People will be proud to be South African, and proud to be African.”  He finished with a whole-hearted backing of Joel Santana, who pushed his native country, the five-time world champions, to the brink. “Now we have a team,” stated the radio announcer. “Before Joel Santana, we had nothing.”

– The reaction the next day was similar, with people showing a sympathy and a positiveness that were generally missing from Bafana’s media coverage throughout the tournament. As the radio announcer had proclaimed the previous night, the game showed, if anything, that South Africa could make a go at it next year. The third-place game, where Spain had to come from behind to beat Bafana an extra time, gave South Africans even more reason for hope, and in the end there was a reasonable amount of praise for Bafana’s performance in the tournament.

– At the final, the Brazilian support was significant. When the U.S. took the early lead, the crowd warmed to the underdogs, just as they had a few nights ago in Bloemfontein. In the end, however, Brazil’s strength was too great, and the U.S. succumbed to defeat behind three second half goals from the Seleção. The exciting game closed out a reasonably good tournament, albeit it one that will ultimately do little to quell any doubts people initially had about South Africa. True, most of the commentary was positive and during my visit, the in-stadium adventures were relatively hitch-free.

However, as we saw in Germany, the World Cup experience is defined by so much more, in particular transportation and accommodations. While I don’t have any horror stories to report on this front, be prepared for them to start flowing in eventually. If the outcry against the vuvuzela was loud, the complaints about travel snafus will be deafening.

In the end, the Confederations Cup was an important event for South Africa. It proved, at least to its own people within the country, that a tournament with teams from around the world could be a success. Obviously the World Cup is a completely different entity. There will be doubters no matter what, but for the time being South Africa can revel in the success of the 2009 Confederations Cup.