The final Pro Vercelli celebration dinner: our team had won it all, we rested secure at the top, and I planned a menu including all those Piedmontese flavors that seemed most quintessential or intriguing or appealing or all three. That meant bagna cauda, a dish I would want to cook even if it weren’t a regional staple, since an hours-long simmer of garlic, anchovies, and olive oil seems irresistible in any context. (We dipped into our “warm bath” with grissini, twisted breadsticks that are the special claim of Piedmontese bakers.) It meant agnolotti, the signature local version of ravioli, which has long been my favorite kind of pasta. (The preparation of this dish gave me new respect for pasta-makers as well as a new aversion to my rolling pin.) And it meant hazelnut cake—a concentratedly easy slice that uses just a little sugar, a few eggs, and a dash of rum to bring out the essence of nocciole. (A spoonful of whipped cream or a cup of chocolate, Brian and I have determined through arduous experimentation, is a good accompaniment to this dessert.)

But the heart of our meal had to be brasato di manzo al vino rosso, beef braised in red wine. Given that my initial, weak culinary promises had been quickly condensed into the “robust red wines of the Piedmont region,” it seemed fitting that such robustness should anchor our culminating spread. Wine pervades the cuisine of our imaginarily-adopted home: even the history of bagna cauda has been nourished by the soil of northern vineyards, since laborers used to cook the dish in fortifying open-air batches during their cold work of winter pruning. And wine helps to show the cosmopolitan pedigree of Piedmontese cuisine; bagna cauda, for example, is a rare peasant food that uses ingredients from far away, recalling how Jewish refugees from Spain brought the taste for anchovies to northern Italy after 1492.

Barolo—the king of Italian wines, and probably Piedmont’s most important export—owes its own distinction to another later emigration: the moment when Juliette Françoise Colbert de Maulévrier, a young woman from an aristocratic French family, was driven from her country by the Napoleonic wars and settled in the homeland of her husband, Count Falletti di Barolo. 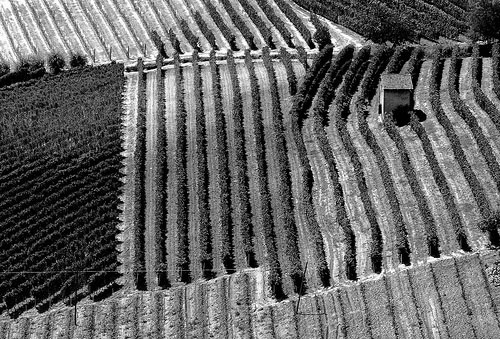 The Marchese di Barolo does not seem the most likely candidate to advance oenophilia in the fields near Turin. Devout, childless, and self-sacrificing, Giulia is known for her charity work in prison reform and the religious education of poor women; she has even been presented for beatification. An adulatory biography published just after her death assures its readers that everyone in Piedmont “easily forgave her being French, so perfect was her freedom from vanity or affectation.”

Nonetheless, Giulia knew the practical value of a little French affectation even when it might conflict with her saintly image. Before the nineteenth century, Barolo tasted sweet, fizzy, and insipid, due to the brief fermentation time for Nebbiolo grapes in the cold of northern Italy, but Giulia was savvy enough to seek the advice of Louis Oudart, a French oenologist; he told winemakers how to produce the dry, subtle, well-aging vintage that was soon prized in the courts of Italy and around the world. Admittedly, Oudart came to Piedmont at the invitation of the Count of Cavour—who managed to pay a good deal of attention to agriculture in and among his political activities. But Giulia was the one who put his new techniques into practice, evolving the cultural and economic fortunes of Piedmont through the example of her own estate. If she is ever canonized, I would venture to say, her contribution to food and drink does not dim the halo.

We were grateful for that contribution, certainly, after our braised beef. The dish’s principles are basic—cook a relatively tough cut of meat for a relatively long time in rich, flavorful liquid—but the result is complexly satisfying. Enjoy it while sipping more of the same flavorful liquid, and reflect on the many, various, crazy celebrations that are made possible by following football.

adapted from A Passion for Piedmont by Matt Kramer

makes two-four servings, depending on whom one is serving

1.) Preheat the oven to 300 F. Choose a large casserole dish with a close-fitting cover. Heat the oil in this dish, uncovered, on the stove top over medium-high heat. Add the beef in one piece and brown on all sides.

2.)  Chop the onion and carrot into small pieces. Add these to the casserole dish along with the wine, stock, bay leaves, cinnamon, and rosemary. Add a generous pinch of salt and some pepper.

3.) Cover the dish and place in the preheated oven. Cook for 10-12 hours, checking occasionally to make sure that the beef is not too dry. The beef should be covered with liquid at the start and there should be a good bit of liquid in the casserole throughout the cooking process. Add more stock or wine during cooking if necessary.

4.) When the beef is very tender, remove it from the casserole dish to a plate. Remove the two bay leaves from the casserole, and blend the remaining liquid, along with the bits of carrot and onion, in a blender to make a thick sauce.

5.) Slice the beef, spoon the sauce over the slices, and serve.

For this dish, I used a cast-iron casserole that is my current favorite piece of kitchen equipment, but I would guess that the beef could also be prepared in a slow cooker.