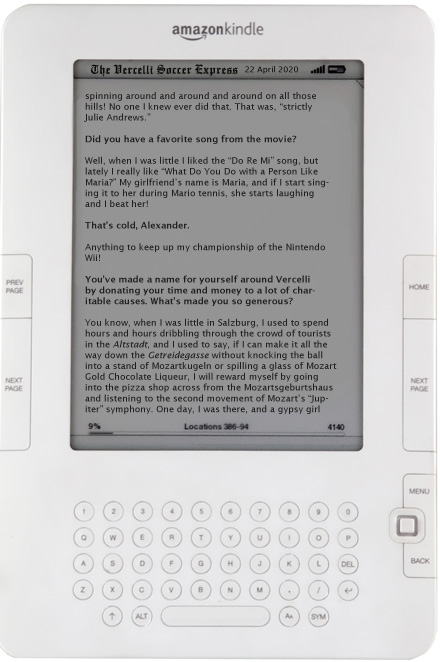 Pro Vercelli’s success this season has been fueled by a new wave of talent emerging from the youth ranks. We sat down with one of the season’s most unexpected stars, 21-year-old midfielder Alexander Zech, to learn about the roller-coaster ride of the season, what it’s like to play with his childhood heroes, and how Vercelli’s most talented youngsters cope with the pressure of playing for the defending champions.

So nobody knew who you were at this time six months ago.

And now everybody knows who you are.

Hey, you came off the bench to score against Lazio in your senior debut, got the winning goal against Atalanta in the Coppa Italia quarters, picked up four Man of the Match awards in your first 15 starts, and had your manager singing your praises in public. Get a new girlfriend!

(Laughs.) Well, I like the one I have, thanks. But I’ll remind her of all that when I get home.

How did all this happen for you?

I don’t really know, you know? When I left [SC Rheindorf] Altach last year, a lot of people back in Austria said, “Oh, no, don’t go to Vercelli, you’ll never get to play, stay in Feldkirch where you can be a star.” But from the very beginning, I always dreamed of something…bigger than Feldkirch.

Feldkirch is a part of Austria?

See, I don’t even know what you’re talking about.

I just felt that, if a club like Pro Vercelli was interested in me now, how many more chances would I get to play at that level? And when I came to visit, I got a tour of Naming Rights Park, and the manager’s wife gave me hazelnut cake. The town is small and everyone gets behind the team. What better place to go to try to make a name for myself?

And then you broke into the first team.

Really, though, most of the credit for that goes to fixture congestion. (Laughs.) The manager wanted to rest the “real” players before the home game against Inter, so I got called up to sit on the bench against Lazio. And once Kenji Mogi started looking tired, I got to go in. I guess I have good energy!

And you scored a terrific goal.

Well, I don’t know if was really terrific of me, because it was Michele [Proietti] who dribbled into the box and rattled the defenders, then found David on the wing while they were rattled. I just “Austria-ed in” the cross, as we say at the Salzburg Akademisches Gynmasium.

And then you scored the winner against Atalanta in the next game.

Yeah. But again, it was a pretty simple header.

Then you didn’t play in the 1910 Derby, and Pro Vercelli couldn’t get a goal.

I’m just saying, I think I see a pattern here.

I hope you’re right! Then I’ll never have to miss a game again.

Well, let’s see: Since you started playing regularly, we’ve passed Inter at the top of Serie A, made the Coppa Italia final against Roma, and reached the semifinals of the Champions League. I’m not betting against it!

I could be a good-luck charm! How excellent!

You played crucial minutes in Pro Vercelli’s huge, huge win over Barcelona in the Champions League. What was it like to have your first European experience come at the Camp Nou, in only your sixth senior start?

That was an amazing feeling. I’m from Salzburg, so the best way I can describe it is to say that I felt like I was playing in the Mozartsgeburtshauskugelhopforchester on 27 Januar! I thought the Naming Rights was big, but going from 30,000 fans to 100,000 really makes a difference—really. It’s like jumping from a string quartet to heavy metal, I think? Don’t get mad, Pro Vercelli fans! I love string quartets!

When we took the lead [through Senad Ibrahimovic’s 29th minute header, after Zech won the corner], I thought we were sure to win, but then they equalized [when goalkeeper Emanuel Sylla bungled his first touch outside the area, allowing Angel Hervieu to take the ball away from him and score into an open net from 22 yards away], and then [Michael] Dogan missed the penalty…I was wearing my heart in my throat! But the manager said don’t worry, we’ve still got the away goal in the bag…

And then you won 3-0 at the Naming Rights.

It was incredible! Sammarco’s goal was one of the best moments of my career. That was when I knew we were going to seize the day.

How did that moment compare to the demolition of Bayern in the quarterfinal?

Oh, the Barça win was nicer, no question. Okay, sure, we beat Bayern 3-0 at the Allianz-Arena, but we were supposed to win that game. Plus, a lot of the guys on that team speak German; they’re my friends!

And now you’re playing Milan in the semifinal.

It’s so crazy to be playing Milan! I watched a lot of Italian football growing up, and Milan won all those titles—eight in a row! And now I’m playing against some of those same players. I read in a magazine that Francismar made his first start for the club in 2003. I turned five that year!

But I hope we win, because Manchester United and Arsenal are playing in the other semifinal, and I would love to go against a team from England!

Let’s talk about Serie A for a second. Since you started playing regularly for the team, Pro Vercelli have kept winning while Inter have fallen a bit off the pace, losing to Sampdoria, Lazio and Salernitana and drawing with Lecce and Genoa. Now you have a seven-point lead with five games left, which some people are calling insurmountable. How do you deal with the pressure of maintaining that kind of consistency?

I know my teammates will not agree with this, but I was disappointed that Inter lost so many games. I thought we had an excellent race in progress, and I was excited to see how it would finish at the wire!

As for the “pressure” question, I don’t feel much pressure, first, because I am doing what I love to do, and second, because I am not the only young player who has contributed to the team this season. Michele [Proietti] scored the winner against Salernitana two weeks ago, and he’s 18, younger than Liesl, my little sister! And Paolo [Martini] and Riccardo [Caprioli] are both younger than I am, and have started more games. And when you think about it, players like David and [Jacopo] Sammarco were among the stars of the team when they were my age, and didn’t have so many veterans on hand to help them out.

When you think about it, I am actually somewhat old!

If you say so, Alexander.

Then that’s settled. I am ancient. (Laughs.)