Pro Vercelli: No Time for Losers

And I can say that with authority, because we are the champions. How are we the champions, when we’re not even halfway through the season? Keep reading.

Let’s do this McKinsey-style, to bring some discipline to the lives of all the English majors in the audience.

Through 18 games, we’re undefeated outside the San Siro, but we’ve done badly enough inside the San Siro to be stuck in second place. On the first day of the season, we went down 0-3 to Inter in a 1910 Derby that had me throwing hair dryers in the locker room—even though statistically, it was a fairly even match: 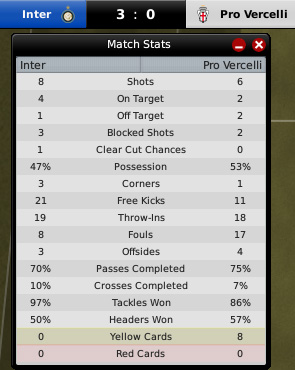 Later in the fall, we lost 0-1 to Milan thanks to a late goal by Francismar, who is now 186 years old and kept alive mostly by spare car parts and surgical tape, and yet who still knows how to score when he is left completely unmarked on a corner kick by every player on the opposing team. Hair dryers were turned on, hot air was blasted, Conair products were thrown. Directly into the hot tub in a few cases.

Anyway, we’ve spent most of the season lodged uncomfortably behind Inter, like Robin on the Bat Pole, in second place. Here’s a chart of our league position through 18 games: 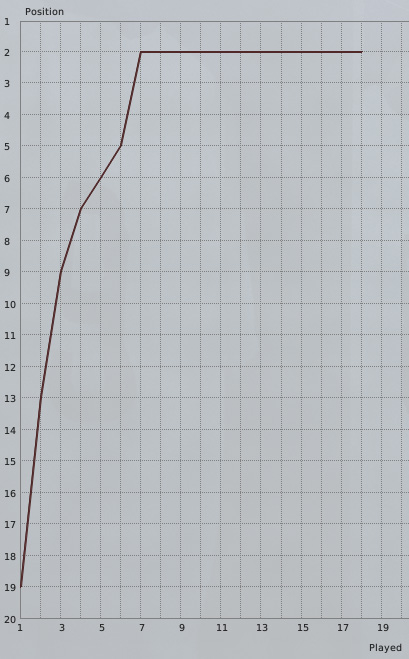 But I’m trying not to worry too much, as we’re on pace to score more goals, concede fewer goals, and earn more points than we did last season, and it’s a good sign if you’re improving in every meaningful category on a championship season, right? Outside the Milan city limits, we’ve been virtually untouchable (four goals conceded in 16 league matches), and we’ve at least gotten all our Milan trips out of the way at this point. So there’s reason to be optimistic. Though if we do lose the title to Inter as a result of dropping the first game of the season, I will…let’s just say the quantity and wattage of the hair dryers that are brought to bear on our end-of-season wrap-up meeting will put Naming Rights Park at grave risk of being the Inferno after all.

We were the top seed in Group A, where we were drawn with proud Ajax, respectable Bayer Leverkusen, and nonessential Beitar Jerusalem (who actually featured a former Pro Vercelli player, Islam Bar Moha, a semi-regular staple in our Serie C1 promotion year). We lost the first game to Ajax at the AmsterdAm ArEnA (sorry if I’m bungling the vowel capitalization, kind of), but won the rest of our group games by a combined score of 13-1 and finished first in the pod.

Because I know you care about the Coppa Italia: We’ve played one Coppa Italia match so far, and our youth team, or “Diaper Dandies,” managed to procure a 1-0 win that puts us through to the quarterfinals, or “Elite Eight.” The win was against Siena, or “Siena.” It was awesome. Baby.

I was excited about this tournament. It’s not every soccer competition that gives your fans the right to say their team are “world champions” while everyone else in the world rolls their eyes and makes faces at each other. So even though it was a massive distraction and an exhausting trip halfway around the world, we were bursting with optimism on the flight to Mexico City. We were fighting for the right to make overblown claims about a tournament whose exact importance everyone is confused about, and we were going to enjoy it.

Our first match, in the semifinals, was against the New York Red Bulls, and we struck a blow for product-placement sanity by beating them 3-1. Dogan missed a penalty in the third minute, but Contini scored twice before halftime to give us a 2-0 lead. New York pulled one back in the 50th minute, but David put an end to their quaint fantasies with a header in the 78th. It came down to reality, and that was fine with the New York Red Bulls, because they’d let it slide. The New York Red Bulls didn’t care if it was Chinatown or on Riverside. They didn’t need any reasons; they’d left them all behind. They were in a New York state of mind.

In the final, we faced Mexican powerhouse Club América. This was a tough draw, largely because the Estadio Azteca, where the match was being played, seats 105,000 people and is the home stadium of Club América. Without getting involved in a lot of complex analysis, the main thing we had going for us in this situation was that Club América aren’t nearly as good at football as we are. And that turned out to be important. The Mexican fans made a lot of noise, but we had 67% of the possession and won 2-0 on goals by—once again—Contini and David.

We won this minor tournament, and we are now the champions of the world. Deal with the cognitive dissonance.

We may only be in second place and facing grim prospects in the Champions League, but our new signings have actually been terrific. Emannuel Sylla, our new goalkeeper, has kept 16 clean sheets in 21 appearances and only conceded eight goals. Dmitry Kozlov, our new striker, has 10 goals and four assists in 18 starts. Alessio Capuano, our 20-year-old right back, is now rated as a wonderkid and has played well in his 20 matches for the club. Fábio has filled in in three positions and looked good in all of them. Rafael Avilán, our new midfielder, hasn’t quite lived up to my hopes for him, but he’s still averaging a 7+ and completing 80% of his passes. I don’t have much to complain about.

Among our more familiar players, Teixeira has been the biggest disappointment, not because he hasn’t played well but because he’s spent most of the season injured and hasn’t really gotten a chance to play. He has four goals in six appearances.

The most exciting players have been our youth projects Paolo Martini and Riccardo Caprioli. Martini, at 20, has continued his astonishing rise and is now probably one of the 25 best players in the world:

Here he is two and a half years ago, just so you can see the strides he’s made:

Caprioli isn’t quite on that level, but he has the highest average rating of any of our defenders and has been extremely consistent in his 18 appearances:

So: there’s a lot to like about our season so far (the world championship, our defending, our overall league record), but also a lot of battles left to win before we can say the season was a success (passing Inter in Serie A, getting through Barcelona in Europe). I’m not planning any major signings or sales during the January transfer window. We have what we need at the Naming Rights; now it’s up to us to put it to good use. Just hope our loss on the first day of the season doesn’t bring back the ghosts of 1910 right when we were on the verge of laying them to rest.

Pro Vercelli: No Time for Losers