What I Saw in the Vatican Museum

The man with the blanked-out eyes followed me all through the Vatican. I first noticed him in the sculpture garden—standing stone-still in front of the Laocoön—and he kept popping up in odd nooks and corners all the way to the Sistine Chapel. It was daylight this time; there was no mistaking him.

I tried not to worry about this. I was in a complex place, mentally. I knew I had some legitimate reasons to be nervous, what with the guy following me and the mysterious meeting with the self-emailer ahead. (I didn’t think they were the same person, because why would the blanked-out-eyes man have emailed me while he was lurking after me through all the loneliest sculpture piazzas in Rome? Was he Blackberry-lurking? Was he Blackberry-lurking on me?) On the other hand, I had come to this city with one good purpose in my heart, and that was to provide the most comprehensive roster of Champions League coverage you could possibly imagine or invent. I didn’t care what it took. I had a true determination to just nail this Champions League scene. 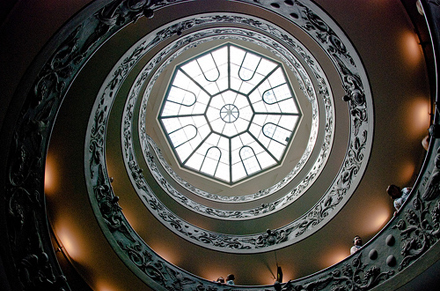 So as it goes, I have noticed through my outings and assignments as a soccer reporter that I tend to be a magnet for unforeseen happenings of all kinds, from getting arrested for insulting Landon Donovan in an airport security line to being recruited to join the Irish Republican Army. And man, I just did not need that now. I did not need the stress of some blank-eyed spectacles man spooking me like a Hitachi corporate assassin from some Asian economic boom. No, Mr. Yamamoto, I do not know where Gabriel hid the blueprints, I thought to myself, just defiantly envisioning movies that didn’t exist.

And the thing about it was, there was honest-to-God Champions League action going on at the Vatican Museums that morning. Kind of a lot of Champions League action, actually. I’d noticed during the two and a half hours I’d waited in line (all flush up against that massive stone buttress like somebody’s parked Vespa) that there were several groups of just interesting, attractive-looking people waiting to get into the museum…and they were wearing soccer shirts! Mostly Barcelona shirts, actually. Actually, all Barcelona shirts. I didn’t see any Manchester United shirts at all.

Well, cool, I thought, the Spanish are in town. Makes sense; it’s a Catholic country. It’s probably written into their social DNA that they have to come to the Vatican Museums whenever they’re in town for a football match, in between eating all kinds of marvelous dishes outside and just drinking the perfect wine. Otherwise, I thought, their wise, sweater-wearing papas (whose tiny hands are perfect for assembling ships in bottles) and stern but loving mamas (who stare piercingly into the distance when a relative dies, which happens all the time) would scold them and make it harder for them to renew the leases on their amazing apartments near the cafe where they meet their friends right in the heart of Barcelona.

(I know a few things about the Spanish because I once lived in Seville—sorry: Sevilla—for four weeks during a language program in college.)

I couldn’t talk to them, because, except for tour groups and people who are forming fake tour groups to try to cheat the system, your place in line is a sacred thing outside the Vatican Museums. But as soon as I’d paid my €57 to get in, I approached one of the groups, wishing I’d learned any Spanish from that language program.

“¿Blaugrana?” I tried to say, in Spanish.

“What?” one of the guys said back to me.

It turned out they all spoke perfect English, which was really impressive until I realized that it was because they were all American. Three of them worked for non-profits, two of them were assistant editors at the Atlantic Monthly, and one of them was “taking some time to think about law school.”

It was pretty much the same everywhere I looked. I did meet one girl who said she wrote “vignettes” for “a website that’s kind of like McSweeneys,” but three of the people in her group were “reporter-researchers” at The New Republic, so I think it all evened out. They conveyed an overwhelming impression of agreeing that they liked Leo Messi (all of their shirts were Messi shirts, except for two that were Ronaldinho, and one that was an Henry shirt from Arsenal) and when I asked them why they’d come to the Vatican Museum on their trip to the Champions League final, they said it was because they were “obsessed” with some of the “pieces” here and had actually all gotten honors at Princeton for some poems they wrote about the Apollo Belvedere and rape.

There it is, people: some authentic Champions League color for you.

I’m not sure why there were no Manchester United fans at the Vatican Museums, but I didn’t really have time to mull over the question, because once you get caught up in the flow of traffic, you’re pretty much in “Vatican Museum mode” until you reach the end of the museum. (“Vatican Museum mode” is the state of a crowd frantically moving ahead at the maximum possible speed until it reaches the Sistine Chapel, not stopping to think or breathe, like caribou sweeping across the tundra in their vast migrating herds, which are genetically programmed not to be able to care about Raphael paintings.)

We charged through the Corridor of Maps, through the Gilt Hall of Paperies, through the Palantium of Enforced Silence, and through the Great Sala of Mirrors Whose Frames Are More Impressive Than The Mirrors. We charged through tiny spindly galleries of, like, red velvet cardinal shoes, and amongst the monumental sarcophagi of people who had chiseled stone pipes for satyrs to blow on for roof decorations in the 1500s. We charged and charged, and the Culés just charged right along with everyone else, barely or not at all even able to notice the “pieces” that they’d come to see. You get the Sistine Chapel in your nostrils in that place, and it’s like a red mist descends, you know? You’re like, please, get me to a room where I can finally look straight up instead of having to look ahead all the time.

The only person who I never saw charging was the man with the blanked-out eyes.

Finally we got there, to that big open space, and it was like Aaaaah…look at all that scowling on the ceiling. That is some world-class scowling. That is just unquestionably some of the most vivid and gigantic glowering I have ever believed I could come across in this world. All that expertly rendered God-frowning just casts a spell on a person. I actually turned to one of my Barça friends, this girl called Alexis, and said, “Look at those colors! It’s like the way a seashell would look if it were furious and imbued with a cultural backstory.” But she was staring straight up so hard I don’t think she even heard me.

Honestly, I was so caught up in this shared experience that I’d almost forgotten why I was at the Vatican in the first place. Which is why, I guess, I was so startled when I felt a tap on my shoulder and heard a voice say, “I hate to intrude on a reverie, my friend, but I have something that belongs to you.”

Un-craning my neck, I turned around. There was something familiar about that voice…that Russian accent…

It was Grigoriy! Grigoriy, from Lenin’s tomb in Moscow. From the last time I tried to do an honest day’s work at the Champions League.

I almost didn’t recognize him. He somehow looked…cagier. More careworn. There was more white in his ponytail and the crinkles around his eyes were slanting more in a downward direction. He was wearing a battered tweed jacket over a sweater that looked like it had undergone some natural processes of the forest floor. He was smiling slightly and holding something out to me.

It was my old laptop. The one I’d abandoned in Moscow when I ran off with his daughter in the middle of my live blog last year.

“I have only used it once,” he said. “But I can report that the auto-login feature is working quite to specifications.”

“But—but why did you use my email? Why did you call me here? Just to give me back my computer?”

He shifted on his feet, a little uncomfortably, I thought. “Let us call the restoration of your laptop a…happy consequence of the reason I called you here.”

“Are you—are you in town for the Champions League?” I wasn’t thinking super-clearly, it was so strange to see him there. It briefly occurred to me that he might give me better tickets.

“In a manner of speaking,” he murmured—and just then, I noticed that the man with blanked-out eyes had very subtly come up behind him and was standing there very intently, just behind his shoulder, as though they were, like, part of the same cohort.

“What’s going on?” I asked, sort of infinitesimally backing away.

He smiled sadly in the direction of three iPhone-waving Barcelona fans and Michelangelo’s Last Judgment.

“I want you to help me steal something,” he told me.

What I Saw in the Vatican Museum