More than any other footballer he seems to have sprung from the serious imagination of a child. The world he belongs to is not the rough, touchy, deceiving world of grown-up risks and chances but a world of lucid justice and simplicity. And just as a child’s prayerbook suggests a high-up fairness in the external order of things, a cloudlike God at the roof of the cosmos dispensing rewards to the virtuous, so his career seems to have unfolded at the center of a halo inside which blessings fall on those who deserve them, power emanates from wisdom, and the beautiful is a manifestation of the good.

Now, there’s a sense in which football is always giving off intimations of this sort of world, and in that sense the feeling it gives us resembles not so much a childish sense of right as a peasant’s consent to hierarchy, doomed to exalt the bearers of an unfathomable grace. There’s a danger in that feeling, which may explain why, in a democracy, the press is always set against footballers and against that exaltation—the more angrily and vulgarly against it the more of the people the press styles itself to be. So in a way the innocence of football is cowed on both sides and awakens a terrific resentment. But in Maldini’s case none of that seems to apply. He’s simply permitted a space of innocence, as if the system needed one true shining prince, as a bathtub drain, so to speak. 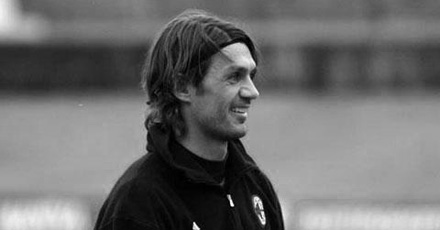 Fancifully, because who knows whether philosophy matters to the body’s moving parts, I’ve always thought it was this forthrightness, this way of living directly and without the frictions and reverses of a life of unclear purpose, that accounted for his amazing longevity. At almost 41 he plays like a 28-year-old and looks permanently established in the main of light. He made his first senior start for Milan on the day Ronald Reagan was sworn in for his second term in office, two weeks before the current king of derided tabloid idols was even born. Cristiano Ronaldo was named after Ronald Reagan, whom his father adored, but Maldini (whose middle name is Cesare, his father’s name) was named after a dynasty. And belongs to one.

His retirement, which is now only days away, strikes me as having an actual tragedy in it, because it’s the one accommodation he’s ever had to make to the indifference of the world to meaning. If meaning were everything he could go on playing forever, racing marvelously down the left side of the pitch to pluck the ball from attackers half his age, keeping his cool and keeping his team alert to the objective. But meaning has no purchase on the sinews, and virtue has no existence in the physical world, and he, too, will be tossed upon rough seas. His pace is already gone, and his unassuming lightness of touch, always so strange and breathtaking in a defender as powerful as he was, would only be a little easier to sustain than the strength that, through innumerable scuffles, supported it.

And the tragedy of this is that his growing old gives the lie to the vision of the world that his career almost made us believe in. Beauty isn’t goodness and power isn’t wisdom, even if, in the world’s haphazard mergings, they might briefly coexist. Blessings are arbitrary, even if they sometimes fall where they’re deserved. Still, illusory though it may have been, the fullness of the congruence he achieved made him a consolation, and we’ll remember him for that, and it will color what we mean when we say he was better at what he did than anyone who ever played the game. Almost without trying, he made us perceive a world that was better than the world we knew.