Ab initio. The tale of Argentine football is one of bittersweet victory and harrowing tragedy. From the founding to its peak in the 80s to the current era of uncertainty and struggle, the stories behind the victories and defeats illuminate the joys and folly of free will as a proud people valiantly row against the tide…

Aspirat primo Fortuna labori. The peoples of Patagonia, the Chaco, and the River Plate, had long produced fierce warriors. However, infighting proved a major problem as clans clashed for scarce resources. A war of nations plagued the River Plate, but fate struck when the well-traveled foot soldier Mario Kempes, a mercenary in the foreign land of Iberia, returned to his native soil. Mario “the Matador” forged a nation of out peoples and led them to a lasting and eternal victory over the orange-draped Gauls from Holland.

The broad-chested Kempes imposed his will in the final battle, physically manhandling the cerebral Captain Krol and his band of soldiers. The “pueblo” rejoiced, but the great Matador’s legacy would cast a long shadow over his successors. Still, the world could not deny the potential that ran in the blood of his brethren. Alea iacta est.

Ab uno disce omnes. A brilliant young general rises to challenge conventional views on size, height, and virility. Diego Maradona, perhaps the best tactician ever, commands the field with authority and precision. His vision for the attack and obsession with footwork elevate himself and those around him.

In “tierras Aztecas,” Diego leads his countryman to newfound heights. He directly engages the white-draped Normans, unfazed by the looming shadows of the monstrous volcanoes Popocatepetl and Iztacihuatl. In the penultimate battle, Maradonna bends the rules in hand-to-hand combat, but then excels in a conventional duel and engages an entire army at once. He lands the crowning blow and stops to glance behind him, surveying the scattered cadavers of defeated foes. Anglia delenda est. 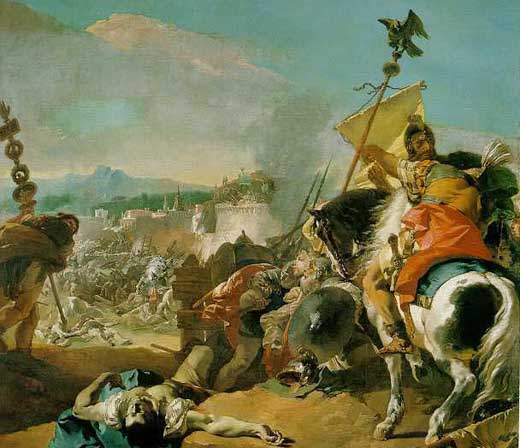 Abyssus abyssum invocat. Maradona, still glowing from his victory, leads a campaign in Italy. While the peoples of Argentina experience the narrowest of defeats at the hands of a Germanic tribe, Diego stays abroad and experiences personal success as a mercenary in the lands of Napoli. Despite numerous accolades, the toil and spoils of war take a toll on his psyche. The once great general leaves Italy for Iberia after rumors swirl of substance abuse.

Diego returns to lead Argentina northward, braving the humid climate of Northern America. However, he leaves the battlefield in disgrace, his taste for exotic spices betraying him. The Argentines wander the battlefield, a body without its head. Years later, another Diego assumes the mantle and leads the nation to another victory over the Normans, but fails to reach the same dizzying peak. Bibere venenum in auro.

Anguis in herba. Maradonna exiles himself to the Caribbean, playing chess in the damp confines of the Longwood house and battling his household demons. In the resulting vacuum, the insidious Lieutenant Veron seizes power. Inter arma silent leges. He has great success in Italia and even ventures deep into the Norman territories. However, the empire overstretches and, against the archrival Normans, he experiences a humiliating defeat in the Asiatic lands.

Back on native soil, a towering Captain Juan Roman Caligula Riquelme rises to prominence on the basis of local victories. He is soon promoted to the foreign front in Hispania, like Kempes before him, and experiences moderate success after a minor setback in Catalunya. Per aspera ad astra. Lieutenant Veron, insanely jealous, directly engages the Captain in Italy but his army is convincingly defeated. In desperation, Veron challenges Riquelme to hand-to-hand combat, but his bodyguard Cambiasso wisely restrains him. A verbis ad verbera.

Ad augusta per angusta. Riquelme rises to prominence but is feared even in his own land. His cruelty knows no limit. He masters the art of the siege, patiently laying wait as defenses crumble in desperation before his indifferent eyes. He perfects the pincer movement while on excursion in the land of the Visigoths, and in a famous victory leaves no stone unturned when crushing the Serbians. Pollice verso. Only an uneasy alliance between the Poles and Germanic tribes can halt his offensive, repelling Riquelme at the Rhine River. Clades Variana.

Unfazed, Riquelme leaves behind the Teutoburg Forest and returns to the Southern half of the Americas. He takes up arms with a fierce band of blue and yellow mercenaries and they go on marauding rampage, leaving the Andes ablaze. Fabas indulcet fames.  He then grows greedy, leading his countrymen on an excursion to Asia in search of spices. Riquelme and his men defeat the Bantu peoples in the battle of Beijing, but the victory is short-lived.

The Captain comes home to find that General Maradona, now Senator Maradona, has returned and aligned with the irate Lieutenant Veron. Despite being countrymen and sharing mercenary allegiances, the Senator disposes of Riquelme at the drop of a hat. Et tu Maradona?

Maradona instills his son-in-law as commandore, but soon experiences a heavy defeat in the Chaco. Riquelme swears allegiance to his band of mercenaries, but rumors swirl about his scheming and desire to dispose of the Senator….ad infinitum…

Elliott is the editor of Futfanatico.com.