If you go to Pro Vercelli’s “records” page in Football Manager 2009, you’ll see that the worst defeat in the club’s history came in a match against Inter on April 24, 1910, which Pro Vercelli lost 10-3. 10-3 is a catastrophic defeat by any standard, but the numbers don’t convey the magnitude of what happened that day. It wasn’t just the biggest defeat in the 124-year history of Pro Vercelli. It was one of the gravest injustices in the history of Italian soccer.

If you look two lines above the “records” page, you’ll see the “competitions” page, where you can find the following information about Pro Vercelli’s title history:

The club won back-to-back championships in 1908 and 1909, then won three straight titles from 1911-1913. In between, in 1910—the same year as that massive loss to Inter—they finished runners-up. And that slight slip was the only thing that kept them from winning the title six consecutive times. What happened in 1910?

That year, by all accounts, Pro Vercelli were the best team in Italy, maybe in the whole world. As the first Italian club to institute modern training methods, both in terms of tactics (they practiced set pieces) and conditioning (their superior fitness often made them unstoppable at the end of games), they had rewritten the script for calcio over the past several seasons, to the point that when Italy’s new national team played its first match—also in 1910—the players wore white shirts in imitation of Pro Vercelli. (Just three years later, incidentally, Italy would field a team on which nine of the eleven starting players were from the club, including eight who came from the town of Vercelli itself.) 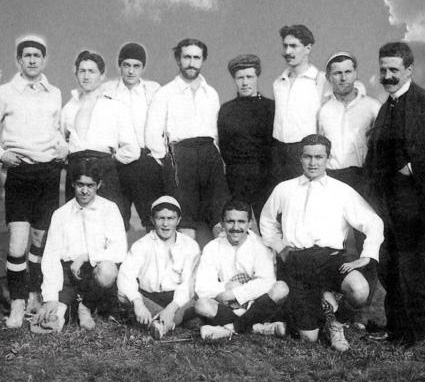 The 1910 championship was contested by nine teams from Piedmont, Liguria, and Lombardy: Juventus, A.C. Milan, Inter, Torino, Genoa, Andrea Doria (which merged with another club to become Sampdoria in 1946), U.S. Milanese (which merged with Inter in 1928), and Ausonia (which folded in 1925), in addition to Pro Vercelli. Pro Vercelli were the overwhelming favorites, both among their own fans—they were one of the first clubs to inspire “religious fervour” among their fans, according to John Foot’s Calcio—and in the country at large, where their all-Italian, provincial status contrasted favorably with the “foreigner-dominated” teams from large urban centers like Milan.

At the end of the 16-game season, Pro Vercelli and Inter finished with identical records: 12 wins, one draw, and three losses. But Pro Vercelli had the advantage in goal differential, and that was the tiebreaker under the rules that were then in place. The Lions were champions for the third straight season, or so they thought. 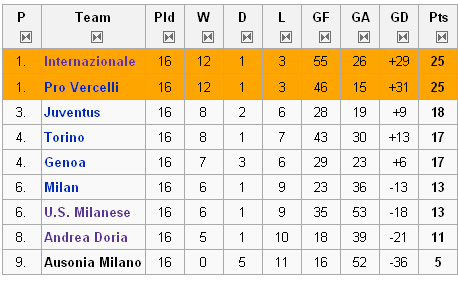 However, the FIGC had yet to develop the principled respect for the letter of the law that so thoroughly defines it today. Playing fast and loose with convention, the governing body ordered the two teams to meet in a playoff to decide the championship. Pro Vercelli lodged a protest. The protest was overturned.

Then, to make the treachery complete, the FIGC—apparently in consultation with Inter—named a date for the playoff on which several Pro Vercelli players were already committed to appear in a military tournament. Pro Vercelli asked to change the date, but the FIGC refused. And so, justice requires me to note, did Inter. 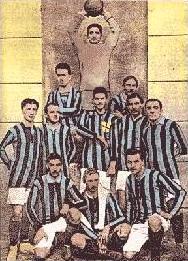 On the day of the final, April 24, Pro Vercelli decided to show what they thought of the FIGC’s and Inter’s behavior by fielding their fourth team. Their fourth team lost to Inter, 10-3, in the worst defeat ever inflicted upon the club. As it happens, their fourth team was also made up of 10-to-15-year-olds. (Who still managed to put three past Inter.)

Thus, Inter won its first scudetto; it wouldn’t win another for 10 years. Convinced of the perfect fairness and legitimacy of this (ahem) triumph, Inter continue to list it as a real championship and have never, as far as I know, placed an asterisk next to “1909-1910” that summoned the eye to a note at the bottom of the page reading “STOLEN FROM ITS RIGHTFUL OWNERS.”

So you can imagine why, having lost every match to the Interisti since restoring Pro Vercelli to Serie A, I enjoyed this one so much.

Oh, we’re coming for you, Inter. We’re coming on a pale horse, and we won’t stop until we’ve beaten you so often and so badly that the ghost of our stolen championship is finally put to rest. Let the Hamlets of this world dither and stab at wall hangings; when 1910 cries out for vengeance, we know exactly what to do.

In other news: It turns out we actually weren’t having a lackluster season. We were having a pretty good season; it was just taking place in a parallel universe in which David wasn’t injured for three months. As soon as he came back, we reeled off six wins and have now moved into fifth place with a Champions League spot within reach:

Of course, I’m now twice as terrified of losing him to A.C. Milan when the co-ownership agreement runs out after next season.

Also: Sadly, the David Effect didn’t translate to the Europa League, where we went down like a determined meteorite to Hamburg in the first knockout round. They did us in with a 2-0 win at the Silvio Piola. As someone who witnessed it, I can assure you that its historical legitimacy was depressingly not in question.