i. The Close Season Opens with a Bang

We’ve qualified for Europe! For the UEFA Cup, to be precise, or, to be precise, for the Europa League—it’s 2015, after all—and this despite finishing in 10th place last season. How did this happen? Because we’re nice!

I didn’t really even understand this process, because I never pay attention to messages like this:

But this year, Italy was one of the countries drawn to receive an extra spot for a team with good behavior:

And, unbeknownst to me, we had the best disciplinary record in Serie A: 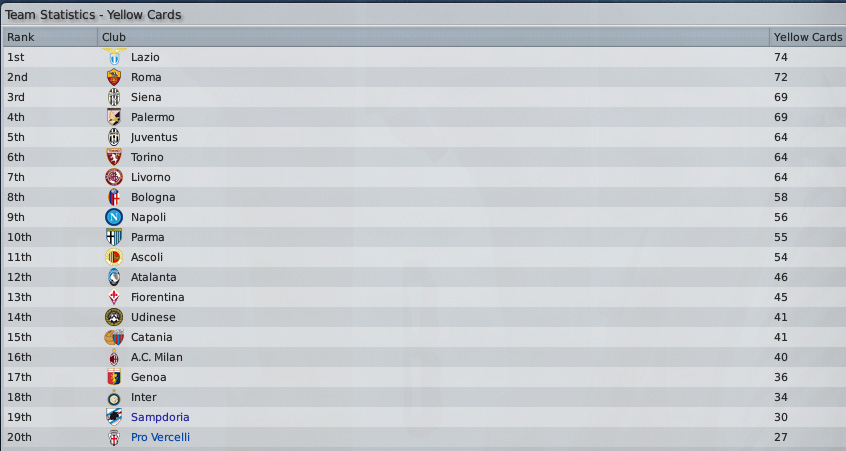 And thus, I received the following reminder from Mauro Marchini in early June:

Which I was only able to decipher gradually by reference to the messages above.

It’s a little anticlimactic to have our first taste of Europe come through a Fair Play draw, but I’ll take it, especially since we clearly deserve some reward for playing such gentlemanlike and positive football. Of course, qualifying on the back of our mild temperaments rather than our ruthless capacity for winning meant that rather than entering in the first round proper with other respectable teams, we were shoehorned into the first qualifying round, normally the province of Andorran runners-up and sixth-placed Pop Idol rejects from Iceland, and that we’d have to wade through four two-legged preliminary ties just to be invited to the group stage.

ii. Nonviolent Is Not Altruistic

Thus it was that, rather than getting a real holiday, the team was required to report back to the Silvio Piola just two weeks after the end of the season. And rather than having a leisurely summer of transfer maneuvering, the tireless Mauro and I had to conduct our player-shopping in parallel with the long march through Europa League qualifying rounds. And while that was going on, the new board was expanding the Silvio Piola by 1000 seats—apparently using powers the old board lacked—and upgrading the youth academy into “one of the finest in the world.” It made for a fairly epic offseason, if “epic” is the word for taking cell phone calls from scouts in Brazil while ducking construction cranes on the touchline against Little Sisters of Mercy AFC.

To make matters worse, the contracts of most of my first-team players were set to expire in 2016, which meant that now was the time to re-sign them, which meant that I had to handle a set of about 10 separate very brutal contract negotiations while attending to all of the above. Brutal because, after a season of surpassing all expectations in Serie A, my players had decided that this was the moment when their girlfriends needed ermine stoles and their agents needed Cadillacs. I fought them back to sanity to the furthest extent I could manage, but by the end our wage budget had nearly doubled before I even had a chance to buy the new defense we needed.

iii. No Nestor When You Need Nestor

To make matters worse still, our wonderkid midfielder Jacopo Sammarco, who’d been grumbling for two years about moving to a bigger club, now flatly refused to talk about a contract, angrily demanded a transfer, and took to his tent like a Playstation-having Achilles. We were faced with an awful dilemma: sell him for well below his actual value (no team would pay full price when they knew they were only a few months from being able to sign him for nothing) or hold onto him for another season but, at the end of it, inevitably lose him on a free.

Just to cut through any unwarranted suspense: We won our eight Europa League qualifying matches (versus: Santa Coloma, FBK Kaunas, Cibalia, and FC Sion) by a combined score of 33-1. Sion held us to a 1-1 draw at their stadium, but other than that, it was like riding a speedboat over the turquoise waters of players with Dribbling 6, Pace 3. We’re in the group stage, in Group L, to be exact, against a tough-ish draw of Lille, Villarreal, and Falkirk. Maybe that doesn’t sound like a tough draw, but Lille are no joke in 2015, and Villarreal are as Villarreal as you’d think.

I’m speaking, of course, of Senad Ibrahimovic, Panathinaikos’s Bosnian central defender, who is 6’6″, strong as an elephant, and possibly a genius:

He wasn’t cheap—€4.6 million—but our defense was vulnerable like the Australian ecosystem, he offers a steadying veteran presence, and I’m hoping he’ll nod in some goals from corners as well. As a bonus, he’s part Italian, so he already speaks the language and doesn’t count against the “2 non-EU players per season” rule that the FIGC imposes on Serie A.

He’ll be paired in the back with Marcelo, a Portuguese/Brazilian defender whom I coaxed from Palmeiras for €2.9 million.

Arjen Servais becomes our first backup defender, while Roni Zano is moving on to Freiburg for €1.1 million.

I also decided we needed a new right back. I mean neither to tar nor to feather Miguel José—he played really well last season and has been a hero of the club for years—but his lack of technical ability makes him a nagging risk against teams of any suavity. After a lot of searching—good right backs are a scarce resource—I unearthed Arnaldo Mora, a promising young Paraguayan for whom I could just afford to pay San Lorenzo’s asking price of €6.75 million. He’s not quite radiantly great at the moment, but he’s an improvement over José, and my scouts are weak-kneed for his potential: 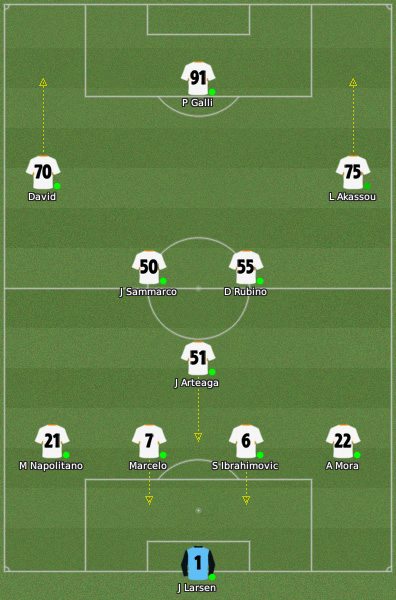 vi. Out with Ill Humours

Spending nearly €15 million renovating our back line obviously took me well over the transfer budget of just over €6 million that the board had offered me. I funded the rest by selling a couple of peripheral players (Zano for €1.1 million, Cabezas for €1.3 million) and—more agonizedly—by accepting A.C. Milan’s offer to co-own David for €8.5 million. That’s a high-risk position to take with our a) most talented player by far who is b) just 20 years old. By I couldn’t see my way around it, since a) we needed the money to rebuild our defense, b) we don’t lose anything, as David stays with Pro Vercelli for at least two more seasons, and c) the fee for A.C. Milan to buy him outright is an additional €17 million, for which price I would not only sell him but pack his bag and lovingly apply a “Vercelli” sticker to his guitar case. He’s thrilled they’re interested, of course.

There was also the quandary of Sammarco. I couldn’t stand the thought of losing such a valuable player for nothing, but I also couldn’t stand the thought of losing him right away and only getting back a fraction of his real worth. In a certain sense it was all profit since I’d signed him on a free to begin with, but with our minuscule revenue-generating power we had to squeeze every euro from every rock if we wanted to improve in Serie A. I finally decided to split the difference by waiting to negotiate a deal for him till just after the transfer window ended: that way we get to keep him till January, and will still get something back when he leaves. He’s going to Schalke 04 for €6.5 million. I took less up-front cash in order to tack on a hefty sell-on clause, so there’s still a chance that he could one day bring us the eight-figure bonanza we dream of.

…is Liaoning FC of the Super League of the People’s Republic of China. We have shirts crying out to be sold. Ni hao, Asian markets.

We open the season against Fiorentina, Catania, and Parma, and between Serie A, the Coppa Italia, and our 9,300 Europa League group games, we’ll be playing a game every 3-4 days at least through Christmas. How will this work with a young squad that only goes about 14 players deep before hitting a significant drop-off? Let’s find out!