Pro Vercelli: Our Eyes Are Cyclones

I don’t know how it happened—whether they got together at their first training session and decided to treat Serie B like a machete treats high grass, or whether it was just a fortuitous accident, like the right chemicals and the right fuse. But one way or another, our new signings are rewriting the story of our season in ways I never expected, and allowing the club to romp through the second half of the league schedule like the King Midas of concussive force. Through 14 games, Fabrizio Barone, our new striker, has eight goals and three assists; Davide Rubino, our new midfielder, has three goals and one assist, and is leading the team—in fact, almost doubling the second-place player—in number of tackles per game.

You could see the impact they had on the club almost instantly, in their very first match. We’d won our last game—Ibáñez’s swan song—but were still reeling through a dismal stretch of four losses in six games and watching the water level rise on our hopes for the season. And now we were faced with a supremely tough road game against second-ranked Pisa. We were already shaken when the opening whistle sounded, and went down 2-0 within 27 minutes. I kept muttering to my assistant manager, Manuel Marchini, that it was too soon to judge the Ibáñez sale and the new signings a failure, but inwardly I was knocking my head against a brick wall. 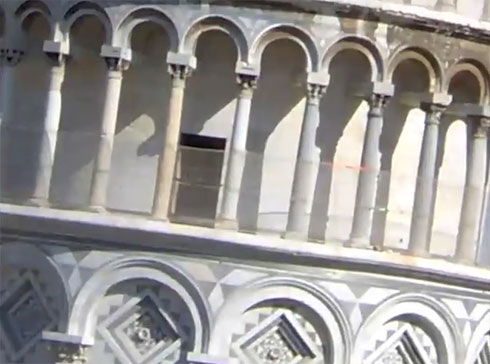 Then, in the 41st minute, Rubino got on the end of a Landry Akassou cross and pulled a goal back. He’d scored on his debut. I fired up the team with an encouraging talk at halftime, and in the second half we dominated possession and kept Pisa pinned in their own half. In the 69th minute, Barone finally broke through in the area and sliced a hard shot past the Pisa keeper. He’d scored on his debut, and we were level. I was thrilled enough at that point, but Barone wasn’t finished: in the 86th minute, he took the ball at the halfway line, went charging down the center of the pitch, and beat the keeper with a shot from seventeen yards. On the back of his two goals, we’d completed the turnaround and won 3-2 after going two goals behind.

The loopy airplane goal celebration highlighted in the video after Barone’s second has meant that he’s already earned himself a nickname around the clubhouse: The Red Baron. He obviously loves flying, he’s named Barone, and he will shoot you down with a song in his heart. Maybe it’s too soon for that kind of immortality, but the kid has displayed unconstrained brilliance since making a sudden midseason leap from Serie C to Serie B at the age of 21. I think he deserves it.

Since then it’s been more of the same. We’ve won 12, drawn one, and lost one since the winter break, a stretch that includes an away win at 1st-placed Ascoli and a streak of eight clean sheets in nine games for Jacob Larsen. (The Ascoli win was actually even crazier than the Pisa game: five goals and two lead changes after halftime, plus a winner scored in the 94th minute to give us the 3-2 result.) We’ve climbed up to second in the table with eight games to play. Even the peripheral aspects of the game seem to be benefitting: Jacob Larsen has won his first senior cap for Denmark, and our youth team finished second in the Under 20s Cup, losing 2-1 in the final to AC Milan. Since the players on the AC Milan U20s team are valued at roughly four times the worth of our senior squad, I was impressed with our youngsters. 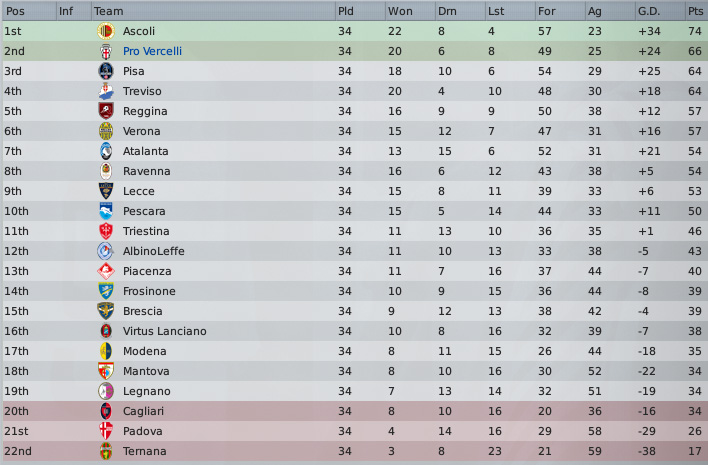 It’s important not to get ahead of ourselves. Second is a guaranteed promotion spot, and that possibility is absolutely back in play, but we’ve accomplished this stupendous run largely by beating up on the bottom half of the table, and there are some tough matches ahead. We’ve got games against Atalanta (a Serie A team last season), Treviso (currently fourth in the table), and Ravenna (currently eighth) before finishing the season with a Wagnerian final showdown with Pisa at the Silvio Piola. 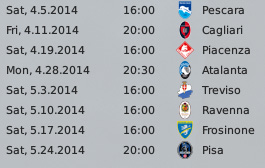 I have no idea whether we can keep this up. What I do know is that I have that feeling about this team—you know, the one Alex Ferguson has about seven months out of the year, the one that says you’re holding the reins of the fastest horse in the kingdom and all you have to do is show it which way to run. Celestial machinery is clicking into place; it’s too soon to say whether that means a guaranteed promotion, or a spot in the playoff, or neither, but nobody wants any part of us right now, and that’s a good feeling in itself.

—
Song clip: Vivaldi, III. Allegro from Concerto grosso Op. 3 no. 8 in A minor

Pro Vercelli: Our Eyes Are Cyclones