Most managers would look at an undefeated season as a career pinnacle, something to win them a table in the great supper club of managerial immortals, where Bill Shankly eats a rib-eye and listens to Connee Boswell in celestial perpetuity. In my case, however, I think the coat-check girl might give me a skeptical once-over. What happened was that we actually did lose a game, 1-0 to Canavese. But then we had to replay it, thanks to a corrupt save game file. And we won that one. So we replayed it again, and won it again. I tried this six or seven times, and couldn’t manage to lose to Canavese even with my youth team. Growing bored and unethical, I decided that winning seven out of eight was the same as winning one out of one. So we moved on, got three wins and a draw in our next four games, completed the first temporal-wormhole-based unbeaten season in soccer history (though I have my suspicions about Arsenal’s). Well, give us an asterisk and refuse me a martini. We still got our promotion feast.

Here’s the story of the offseason, in handy bold-header form.

A Bit of Late-Season Housekeeping: We won the Serie C2 Supercoppa, a micro-tournament contested by the champions of the three Serie C2 divisions. Hooray. Also, I won the Serie C2/A Manager of the Year Award. I’ve left express orders that the ring of candles with which I have encircled the trophy must never be permitted to go out.

Saddest Offseason Development: The loss of two of our veteran players, Marco Conchione and Orlando van der Ent. Marco was the subject of the first-ever Pro Vercelli video and our leading goalscorer two years ago, during my first season at the club. OVDE was a first-team regular as recently as last December. However, their contracts are up, and they’re in their mid-30s now. Marco has retired in order spend his days reading Gawker and buying expensive groceries, while OVDE is chilling on Facebook just emailing tons of people about their next college reunion. They can both whip up an indie rock mix in seconds. It’s heartbreaking.

Most Encouraging Offseason Development (tie): The fact that most of our loan signings from last year returned for a second season. The fact that we (finally) made some staff improvements, signing a good physio (though I had to sack both my previous physios before the board would let me bring in a new one) and a new scout, the fantastic Boris Cinotti. Walter Colombo is still in the building, however. Speaking of whom, here’s something touching—check out his “favored personnel”: 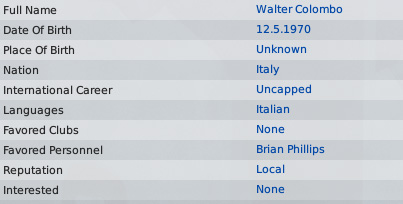 I almost feel guilty about this. Almost.

Second-Most Encouraging Offseason Development: Our season ticket sales jumped from 500 in 2009 to 1900 this season. Vercelli is gearing up for Serie C1.

Weirdest Offseason Prophecy Made by the FM2009 Match Engine: Argentina will win the South Africa World Cup. The team they face in the final will be the Czech Republic.

Least Weird Offseason Prophecy Made by the FM2009 Match Engine: The Czech Republic will defeat England. In the quarterfinals.

What Will Pro Vercelli Look Like Next Season: Really, really similar to last season, with two additions, a strong left back named Emanuel Pellegrini (on loan from Inter) and a young Ivorian striker named Landry Assakou (on loan from Atalanta), both of whom should be starters. I’m also working on buying a promising striker named Alain Messi from F.C. Waidhofen/Ybbs, largely out of respect for his surname, partly out of a desire to type “F.C. Waidhofen/Ybbs” as often as possible. But he won’t be here till January at the earliest.

How’s It Looking in Serie C1/A: The teams to beat are Rimini, Padova, Verona, and Venezia. Nice little Shakespeare play going on at the top of the league.

Our Hopes: To stay up, obviously. I’d love to say that we could complete a second undefeated season and storm into Serie B. But every step up in the Italian league system represents a pretty big jump in quality, and we only have two players over the age of 23, so I’ll be very happy with a safe mid-table finish this year. One major concern for me is the attitude of Jorge Ibáñez. He finished last season as the leading scorer in Serie C2/A, but he got arrogant toward the end of the year and his performances suffered the kind of decline normally reserved for Ukrainians at Chelsea. If he can’t rediscover his ambition, my third season at Pro Vercelli could be a very long one.