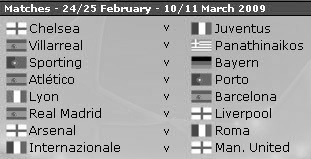 I’d love to look knowing and say that the Villareal-Panathinaikos matchup is more interesting than it appears, but my first reaction is that these matches are appealing more or less in ascending order of obviousness. My longed-for “virus derby” between Manchester United and Real Madrid didn’t materialize, but Madrid-Liverpool is almost as good, and it will be fun to watch Mourinho take on Alex Ferguson again. (Obviousness, but then I warned you.) Chelsea-Juventus has some overtones, since you could argue that Juventus is the club Abramovich is slowly transforming Chelsea into. Plus there’s the whole Ranieri-back-to-the-Bridge story: obviousness!

I was secretly sort of hoping that Chelsea would draw Roma and go through on a last-second own-goal from Riise. But you know. It’s never too late.