Tottenham have released the first images of their new stadium project. Check out the name gloriously displayed across its side. 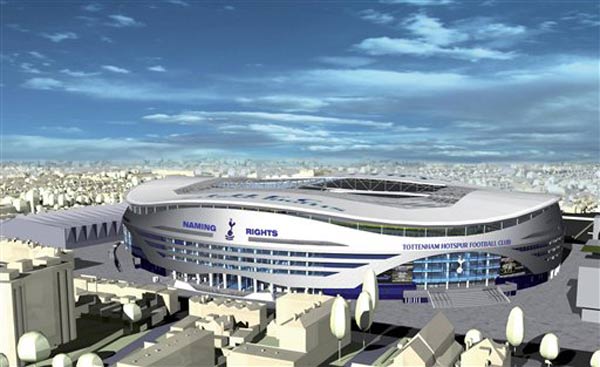 Seriously, if you were a Spurs employee, and you saw that your bosses were about to release images of a beautiful new stadium with “NAMING RIGHTS” emblazoned across the side of it, do you think you might have cautiously raised your hand and suggested putting something else there? Something a little less, I don’t know, nakedly mercantile? Obviously I realize that the club will in fact sell the naming rights, so I guess this could be taken as a welcome dose of honesty. But given that their accompanying publicity material is all about putting supporters first and creating the ultimate fan experience, the name on the image strikes a dissonant chord at the very least.

What do you think of the stadium itself? Is it too cautious for its own good? I like the curviness, but there’s a cheap-toy quality in the way it’s put together that may be a product of its being a computer graphic that does not yet exist in the real world, or may not.