Points of reference: we tend to read footballers as falling somewhere along the same crazy/sane and weak/tough axes we also use for rock bands, where “crazy” means some combination of inspired and unconventional, “sane” means operating according to consistent and more or less socially acceptable logic, “weak” means what it sounds like it means, and “tough” means physically crushing the audience beneath a solid wall of decibels.

First instincts are usually right ones. David Bowie is crazy/weak, Metallica is sane/tough, the mod scene wanted to be crazy/tough but wound up landing near the middle of both axes. The Rolling Stones were crazy/tough. One of the best things you can say about indie rock is that it rescued the weak/crazy quadrant from the implicit sanity of the studio marketing routine, which wanted teenage girls to read *NSYNC as crazy before American Idol appeared on the scene to show the world that what it really wanted was sane/weak all along. 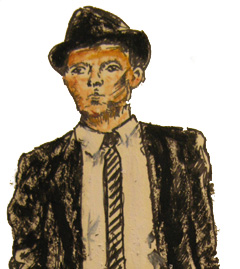 Midfielders tend to fall in clusters around a few fairly predictable coordinates: there are the crazy/weak playmakers like Pirlo and Ronaldinho, the tough/sane enforcers like Roy Keane. It may be a stretch, but you could argue that Makelele’s innovation was to see how crazy could be a predominately defensive quality. In the same way, the confounding thing about Gareth Barry’s game is that he turns sanity into a quality of attack.

Gareth Barry is tough, or tough-ish, but it’s a Frank Sinatra tough rather than a Ramones tough. He’s not out to roar until you’re deaf, he’s out to be so controlled and unimpressed that you’re backed into making your own mistakes. He’s rarely surprising, but that’s not to say there’s anything preconceived about his play; it’s just that he moves with such self-conserving composure that he feeds his own certainty back into everyone who watches him. He takes not being flustered to the point at which it begins to resemble choreography. He does this so well, in fact, that it does finally surprise you, at the moment when you realize how much he’s done in a game and how little you’ve noticed it. Remember last season, when he started playing regularly for England and there was a subtle collective gasp, as if everyone suddenly realized they’d completely overlooked him? The realization that he was actually really good startled everyone more than anything he’d done to convince them of it.

Sane/tough in his case means persisting despite not quite belonging: being a crooner in a game of rock stars, struggling to be heard, playing the same tunes night after night. With his back to the goal it’s “Autumn in New York,” then a quick turn, a shot at the top corner, and “I Got Rhythm” as the ball slides into the net. There’s a grimness to that kind of life, a doggedness of standards and cigarettes, and you can see it floating somewhere just behind his face. But when it’s time to play he finishes his drink, goes onstage, and does his job.

What was so shocking about the drama of his failed transfer last summer was not that he’d want to leave Villa, but that he’d find himself in a tabloid saga with no way out: it was so unlike him, that spiralling tawdriness. It wouldn’t have happened to Johnny Hartman. Is he losing his sanity? Is he moving toward the opposite pole? It will be interesting to see, but I doubt it. Being sane doesn’t mean being perfect, and even Sinatra punched a gossip writer every once in a while.