Zola to West Ham; Also, Which Other Savagely Naturalistic Writers Should Manage in the Premier League?

West Ham are about to make Zola their new manager, at least if the rumor can be believed. At first, I thought Balzac would be a better fit for the post, but then it occurred to me that Balzac still has traces of sentimentality, and what West Ham need is exactly the kind of unflinching sense of systemic inhumanity and cruelty that only Zola can provide. Although I’m still trying to figure out how his role in the Dreyfus affair will affect his preparations for Tottenham. Also, the fact that he’s been dead for nearly 106 years is bound have a negative effect on team morale. I mean, look what happened to Kevin Keegan. 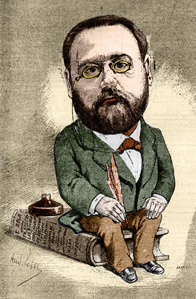 What’s that? You mean to say that West Ham are looking to hire Gianfranco Zola, the 42-year-old star Italian footballer, and not Emile Zola, the French novelist who died in 1902? You know, I guess a part of me always knew that. Anyway, let’s pretend it’s not the case, and you can help me figure out which other writers should manage which other teams. Here are my thoughts so far.

Victor Hugo — Arsenal. Historically considered boring; recently jazzed up with Broadway pyrotechnics and a lot of songs about the “triumph of the human spirit.”

Charles Dickens — Chelsea. Virginia Woolf once said that when Dickens’s novels got slow he tended to “throw another handful of characters on the fire.” Also a philosophy employed by Roman Abramovich when forging his transfer policy.

F. Scott Fitzgerald — Newcastle. So much potential. So badly run.

Graham Greene — Blackburn. No one’s claiming he’s the best at anything, but if you want someone who gets the job done year in and year out and isn’t afraid of hard work, Graham Greene is your man.

Lewis Carroll — Tottenham. Was it really all a dream?

That’s what I’ve got so far. Tell me, who am I leaving out?

Zola to West Ham; Also, Which Other Savagely Naturalistic Writers Should Manage in the Premier League?