I Went to San Jose, and I Didn’t Found a Website Called Plazzy 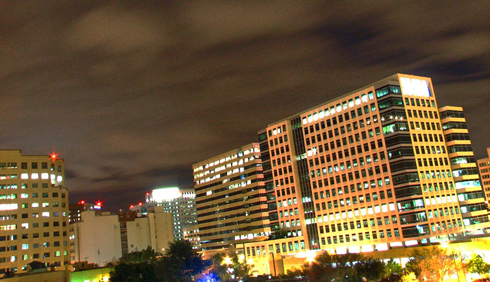 Just got back from a weekend in northern CA, where I managed to take in the Quakes-Galaxy game without getting tangled up with any celebrity morticians or IRA operatives in the process. Just me and my ticket, no special sauce. Just a man and his hard plastic seat. I like that. I think I’m going to do fine covering games in this country.

I flew in late Friday and spent a couple of days making sense of everything, starting with questions like “What is MLS?” and “Why does my ticket to a San Jose soccer game tell me to go to a baseball stadium in Oakland?” Once I’d gotten the vibe from Silicon Valley and forced myself to understand who Landon Donovan was, I bought a pen and a notebook at a Staples, ate an enchilada combo platter at the strip-mall Tex-Mex place next door, and drove around looking for a Quakes jersey. “Bring on David Beckham,” I muttered to myself, like a nanny.

San Jose’s a weird place, I thought, watching the evening sun play on the walls of low-rise office-park-type buildings that, though modest, were self-evidently the international headquarters of Adobe. Or else their names were just regular capitalized nouns, only preceded by a tiny lowercase “e,” slightly tipped back like it was going down a very conservative waterslide. Lot of fast food in among the palm trees. Kind of an airy, hazy glow. On the street corners, you sometimes see a guy with that wild homeless-person look on his face, only he’s wearing sunglasses, a black velour polo shirt, and like $1200 slacks with sandals. That’s a venture capitalist, and he’s looking for somebody to give money to. Do not make eye contact with him, or you’ll find yourself the proprietor of an interface that will revolutionize the platform.

I’ll tell you one thing, though. If I were San Jose, I wouldn’t have named my soccer team the Earthquakes. I wouldn’t have named my team after the unspeakable natural disaster that, geologists agree, will one day level all my buildings and send my whole city sliding into the sea, like a kid who was done with a board game. I mean, why don’t you just name your team The Death That Shall Lay Waste to Us, or the Savage Bargain of the Gods? I guess it’s natural, though. The Pompeii Volcanoes were probably hot in a good way right up till the lava flow made that metaphor untenable.

Yeah, so, the match itself…pretty good game. Watching soccer in a baseball park is sort of disorienting, at least when the diamond is still clearly marked on the pitch, because your brain keeps naturally shifting its perspective and half the time you think they should be taking the ball around the third-base line. But still, I was into it. There were all kinds of late goals, and San Jose won, which is what I wanted (I am against the Galaxy). Beckham and Landon Donovan were like little, famous, overrated dolls out there. Actually, I shouldn’t knock Landon Donovan. I know people say he couldn’t cut it in Europe, but I’ve seen Europeans play plenty of times, and he was definitely better than at least two of the three other guys who trimmed hedges with me in Glasgow.

I had a hot dog and watched the California Clasico. It felt good. I am a citizen of this country.

I Went to San Jose, and I Didn’t Found a Website Called Plazzy