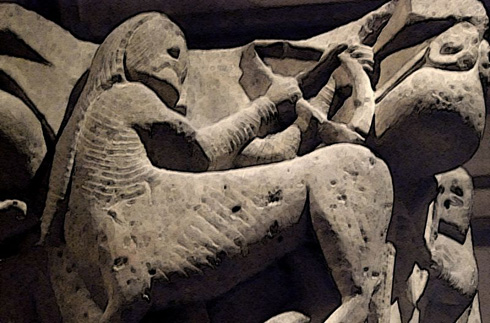 Somewhere this morning I saw Fernando Torres’s physique described as “centaur-like.” (UPDATE: It was here.) Too good not to pass along, in the spirit of the still-to-be-neglected Tuesday Portrait.

I feel like Euro 2008 is due one final reckoning before I turn full-time to covering Frank Lampard’s journeys over the Earth, but I’m having a hard time figuring out what to say. Most post-tournament wrap-ups boil down to determining which adjective triumphed over which other adjective, but even writing about spirits and memories right now feels too much like words about wine. What I’m actually interested in, I think, is the fact that the tournament is gone, and that split second of emptiness it leaves before everything else starts rushing in to fill it. Reading all the valedictions yesterday—including some by writers not known for soccer coverage, like Ian Buruma and Anne Applebaum—I kept imagining that people were throwing ropes into the ocean to feel connected to a ship that had already sailed.

But the absence of the tournament doesn’t make for a very interesting blog post. Or it does only to the extent that that feeling, that brief background hint that something is missing, serves to point up the basic unimportance of football: that even at its greatest, it’s one part of your daily life, something you make room for, something that fits in with everything else, and that as often as football makes us use words like “stunning,” “transcendent,” and “beautiful,” it’s ultimately an entertainment that’s never quite as unforgettable as it seems to be while we’re watching it. Of course, it’s those other things, too, which is the stupid miracle of it, in the end. Still: Euro 2008 was one of the most purely enjoyable experiences that I’ve ever had as a sports fan, but two days from now I’ll have stopped looking at the clock in the mid-afternoon and thinking there should be a game on. That hush of abandoned expectation; the sound of priorities going painlessly back to normal.

So there’s not much I can make of the fact that the tournament’s over, especially as I’d rather see this site err on the side of creating myths than use it to expose their transience. Certainly it was a tournament that embodied the mythic in a faun-faced, grinning, prodigal, audacious way, with the lightning and the comebacks, with the counterattacks, with the goals scored in the last 10 minutes, with the last-minute revelation that Spain was the truth from the start. Fernando Torres has the physique of a centaur, and that’s the only way I can understand his tournament-winning goal, when he stretched out at full gallop and somehow got past Phillip Lahm, then somehow beat the sliding Lehmann to the ball—and even if Lahm pulled up the simple fact that Lehmann was massively interposed between Torres’s dainty outstretched foot and the goal should have been enough to kill the chance, only Torres somehow flipped the ball over him and watched it scuttle over the line, spinning against itself. The deftness of slow-motion and the raw onslaught of horseback, only giving a completely different meaning to “pour of tor and distances.”

That’s one more rope in the water, I guess. Not that a metaphor from the time of the Armada can have a lot of relevance for a moment in which “remembering” is a hybrid act that marries suspicion to the consultation of an external repository (maybe more than one, if you read Arabic or know the difference between Dailymotion and Imeem). A substantial fraction of the goals scored at Euro 2008 are currently available on this site; hundreds of people found themselves here yesterday after doing a Google search for some variant of “best goal of the tournament,” and guess how many stuck around to read my sterling paragraphs? It’s hard to say the tournament is slipping away when there are fragments of it everywhere, isolated and repackaged as moments of discrete inspiration. I saw one this morning, rolling down the street through the back window of an SUV. An event reconfigured as a narrative reconfigured as a constellation reconfigured as a star. . .

I’m not complaining; Torres’s goal was great enough to rule your astrolabe. This is just another thing that’s happening.

Nevertheless, there’s a hiss, there’s a quality draining. Maybe it’s continuity, and the suspense that depends on it. Maybe it’s the sense of possibility that disappears with the influx of Top-5 lists. Maybe it’s just the ability to commit meaningful time to a project. It was an event around here, this tournament. I got mocked by the Guardian. (And Rafa—look whose team lost!) I posted unreadable excerpts from The Man Without Qualities, which people actually read. Fun was had. Watching the matches, I often found myself moved. I’m going to miss it, briefly, until I don’t.

One or two lingering orphans: