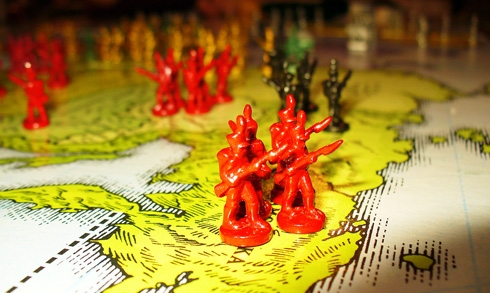 I think we can all agree that running a front-page tabloid article featuring a Photoshopped image of Poland coach Leo Beenhakker triumphantly lifting the severed, bloody heads of Germany captain Michael Ballack and coach Joachim Löw is behavior that lands hard with both feet in the category of “not cool.” I don’t think it’s a subject we need to debate at length. We could probably whip up a pretty good rule of thumb to the effect that if you’re a designer for a Polish tabloid, and one night you find yourself summoning all your talents to add blood effects to the simulated neck-stumps of people who are in fact alive and likely to see your work, it might be time to think about your life-path.

That said, was it really necessary for the Guardian to tart up its coverage of the controversy by making it seem as though Leo Beenhakker willingly participated in the photo? He didn’t, of course: it was a doctored image, manipulated without his knowledge by the Polish Super Express. But he apologized anyway, because he found the picture sickening. From here it seemed like a large gesture, which is why it’s so strange to see the Guardian reporting the apology by using ambiguous language (Beenhakker “landed in hot water” over the scandal) and selective quotation in a way that seems designed to leave the reader with a vague impression that Beenhakker did something wrong.

The scope of implied guilt widens even further when we find Peter Danckert, the chair of the Bundestag’s sports committee, declaring the picture “an absolute scandal” and expressing his hope that “the Polish government reacts appropriately to it.” Where exactly did the Polish government come into this? And what would be an “approriate” reaction? Danckert’s nebulously sinister comment becomes slightly comical when you recall that another Polish tabloid recently wandered into a scandal by printing its own doctored picture—this one showing Beenhakker about to decapitate Ballack, who is depicted in a Prussian military helmet—only this tabloid, Fakt, is owned by a corporation headquartered in Germany. Maybe the German government should take appropriate action? Maybe Danckert could apologize to himself?

Let’s treat this as a prelude to our interest in the Poland team over the next few days and weeks. Germany’s invasion of Poland in 1939 started the Second World War, and Polish resentment over the occupation is still sharp enough for football matches to take on the tone of national struggle, and the rest of us (in the English media and elsewhere) find that tension so entertaining that we look for ways to escalate it even as we pretend to be appalled by it, and the state of affairs is such that even the German government is willing to jostle crudely for what if you squint the right way might appear to be the moral high ground. This is where we are. Poland and Germany open their Euro 2008 campaigns against one another on Sunday. Poland has never beaten Germany in football, in a rivalry that goes back 75 years.