Horrified Because Our Cause Is Just 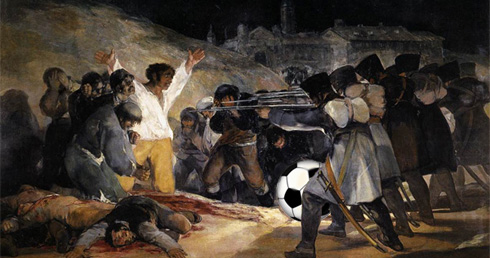 Probably best not to say too much about the fall of Avram Grant. The execution was carried out with a swiftness and clarity that can only be interpreted as a sign that the regime is listening. Exercise all possible caution, you who do not wish to share his fate.

He was a manager with the dignity not to play Andriy Shevchenko unless he felt like it, and now he is an ex-manager chillingly at liberty to ignore cell-phone calls from Andriy Shevchenko’s agent. I might (walking carefully through the park, not stopping too long at any single bench) privately say that I’ll miss him. But further thoughts, if in fact I have them, will have to wait for publication in samizdat form, to be distributed under a cloak of secrecy by friends with illegal jazz collections.

Today the Daily Mirror says that the rumors of ruthlessness and fury were reactionary lies, and that in fact Grant and Abramovich parted on the best of terms—and only after Grant, smiling and expressing his heartfelt support for the existing power structure, turned down Abramovich’s offer to double his salary.

I am legitimately terrified at this point.

There are whispers abroad that Mourinho is coming back. Why shouldn’t he turn back time, the whisperers ask, now that Abramovich has given him the car from Back to the Future? Personally, I won’t know what to think until an 80-word statement on the Chelsea website tells me what to think. But I can say that if I were Mourinho, or Roberto Mancini, or Frank Rijkaard, I would certainly take the job.

Human decency would leave me no choice. A considered examination of the facts would force me to believe that the people’s servants at Chelsea have all our best interests at heart.

Horrified Because Our Cause Is Just